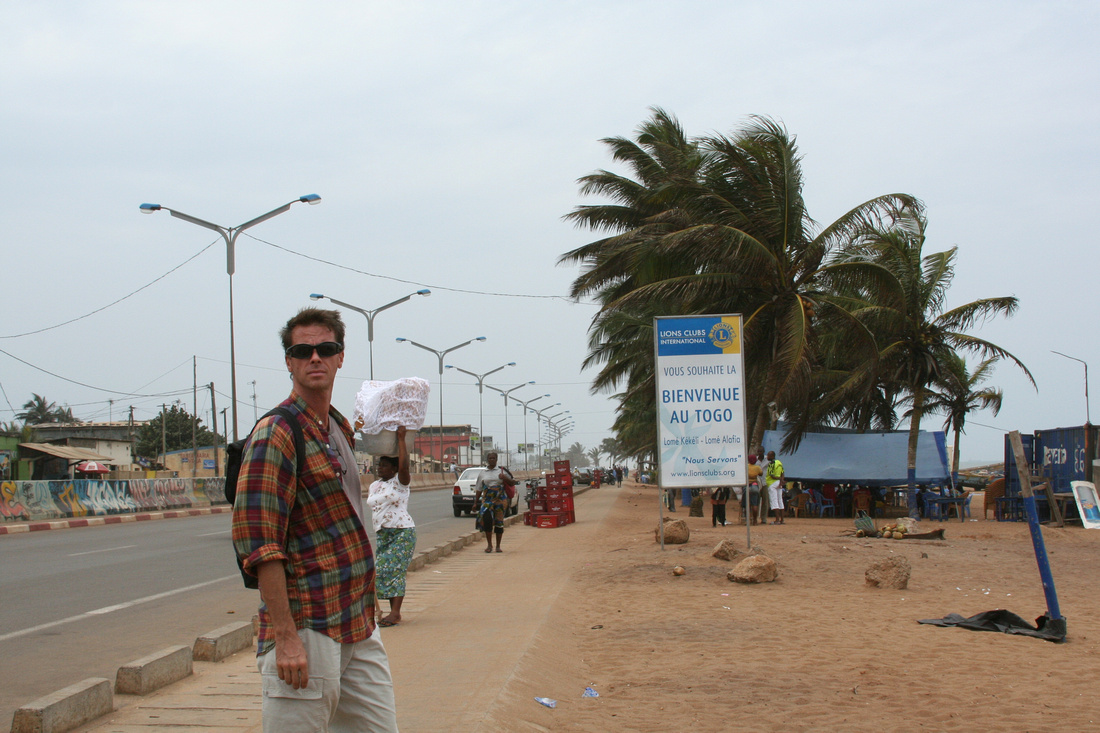 I couldn't resist the temptation of trying to cross the border into Togo.  My friend Paul (after just finishing a Peace Corps gig in Liberia) was a good sport and agreed to join met.  Togo is one of those faraway places that many people in the United States have never even heard of.  I knew where Togo was on a world map, I knew that the capital was Lomé, and I had heard of the 2010 attack on the Togo national soccer team bus as it drove through Angola, resulting in three dead and nine wounded.  Being a soccer fanatic, I was also familiar with the Togolese player Emmanuel Adebayor.  But that about covers the extent of my prior knowledge of Togo.

Togo is a narrow country that is wedged between Ghana and Benin.  It has a population of about 7 million people, with 1.5 million people living in and around the capital and largest city, Lomé.  Lomé is located on the Gulf of Guinea. Paul and I met our driver at 7:30am at our hotel in Accra.  It took about 3.5 hours to drive from Accra to Aflao - the busy border town where we needed to leave our driver and proceed on foot into Togo.  Of course, we first had to deal with customs, and that had the potential to be a difficult proposition given our situation.  Why?  Because we did not have multiple entry visas for Ghana.  We were able to secure a visa from the Togolese embassy in Accra, but we did not have time to secure a multiple entry visa for Ghana.  In other words, we could get into Togo, but we had no visa to get us back into Ghana.

We decided to roll the dice and give it a try.  Both of us had spent time in different parts of Africa and found that almost anything is negotiable in Africa...for the right price.  We walked into the customs office at the Ghana-Togo border, explained what we wanted to do, and then we waited.  A long time.  Finally, we were invited into the office of the customs officer to discuss the possibility of securing a visa for us to get back into Ghana if we cross the border into Togo.  The officer explained the difficulty of getting a visa on such short notice, and finally said that he could arrange for us to receive an "emergency visa" for the price of US$150 each.  Cash of course.  That was a deal breaker for us and we explained that it was too much money.  After further consideration, the customs officer revised his approach and said that he would give us a tourist visa for US$50 each, instead of an emergency visa.  We agreed.  The only catch was that we would need to find this officer again once we were ready to cross back into Ghana.  Feeling lucky?  Well, we must have felt lucky because we said ok.

Two minutes later, we were walking across the line the separates Ghana from Togo.

There were two major changes from Ghana that we noticed immediately.  First, English was now useless.  In Togo, you speak French.   Thankfully, I studied French for quite a few years and had lived in a French-speaking part of Switzerland for a short time.  More importantly, I actually still remembered enough French to get by.  It is not pretty, but its enough to get around.

The second major change that we noticed...motorcycles.  A lot of them.  In Ghana, motorcycles are banned, but in Togo, pas de problème! 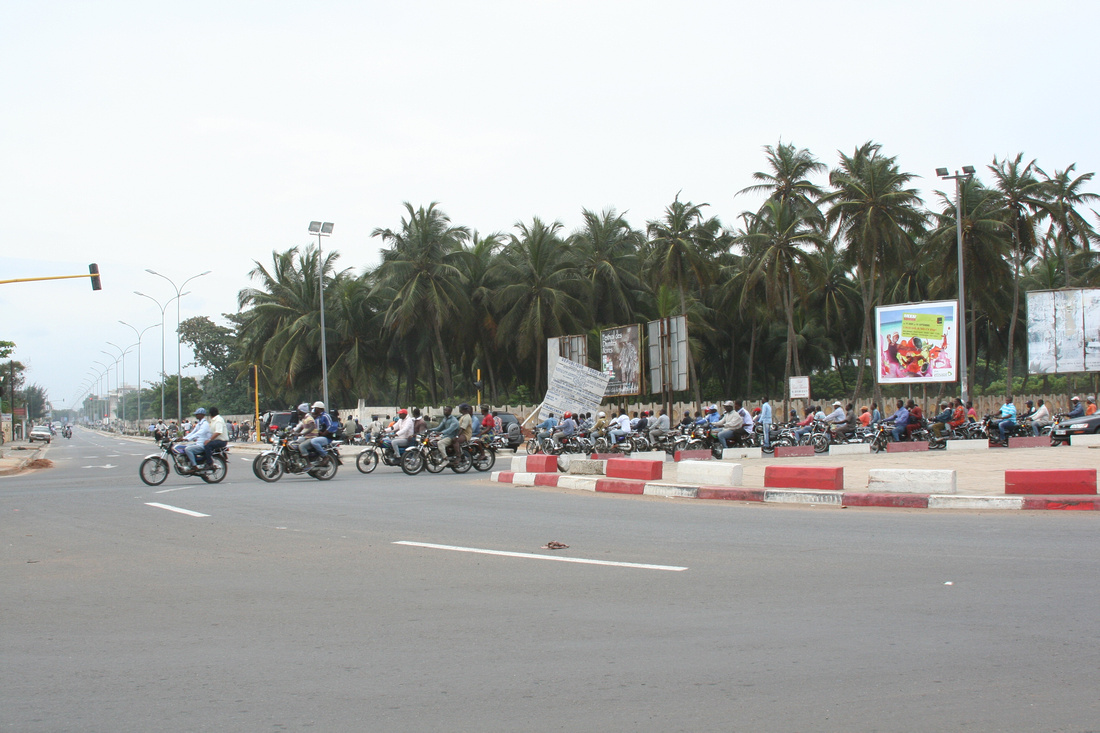 Motorcycles are allowed in Togo! ...banned in Ghana

Here are a few photos of Lomé. 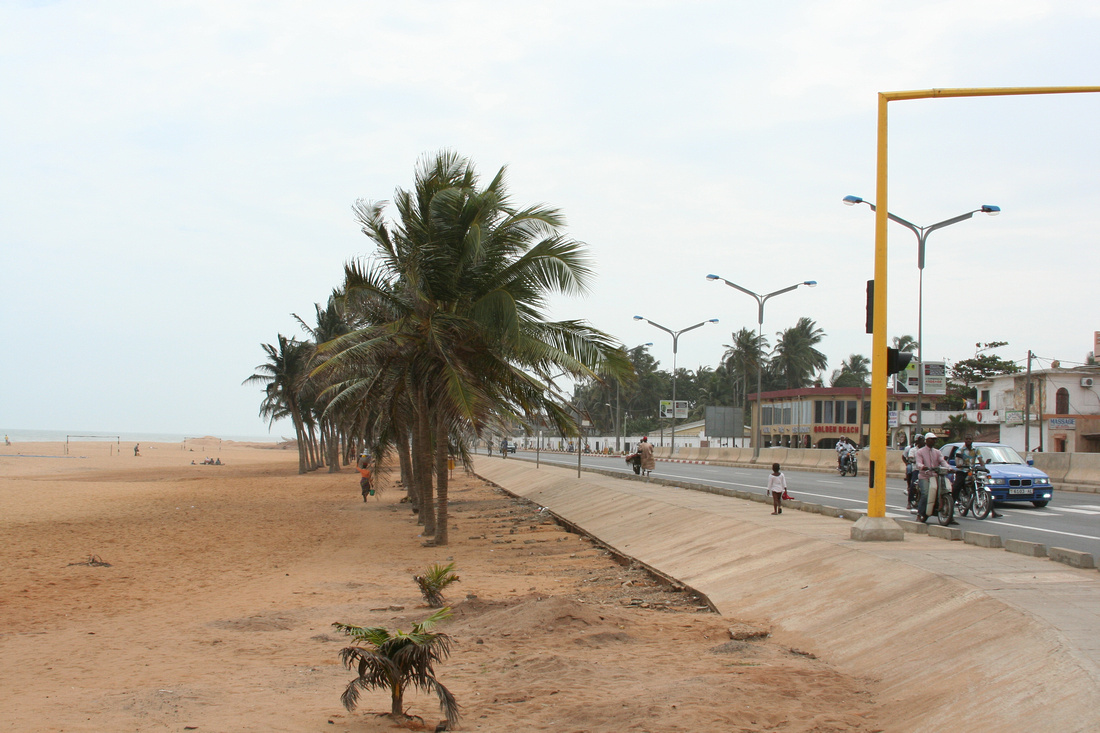 The Coast of Lome, Togo

Beach soccer anyone?  Apparently not today. 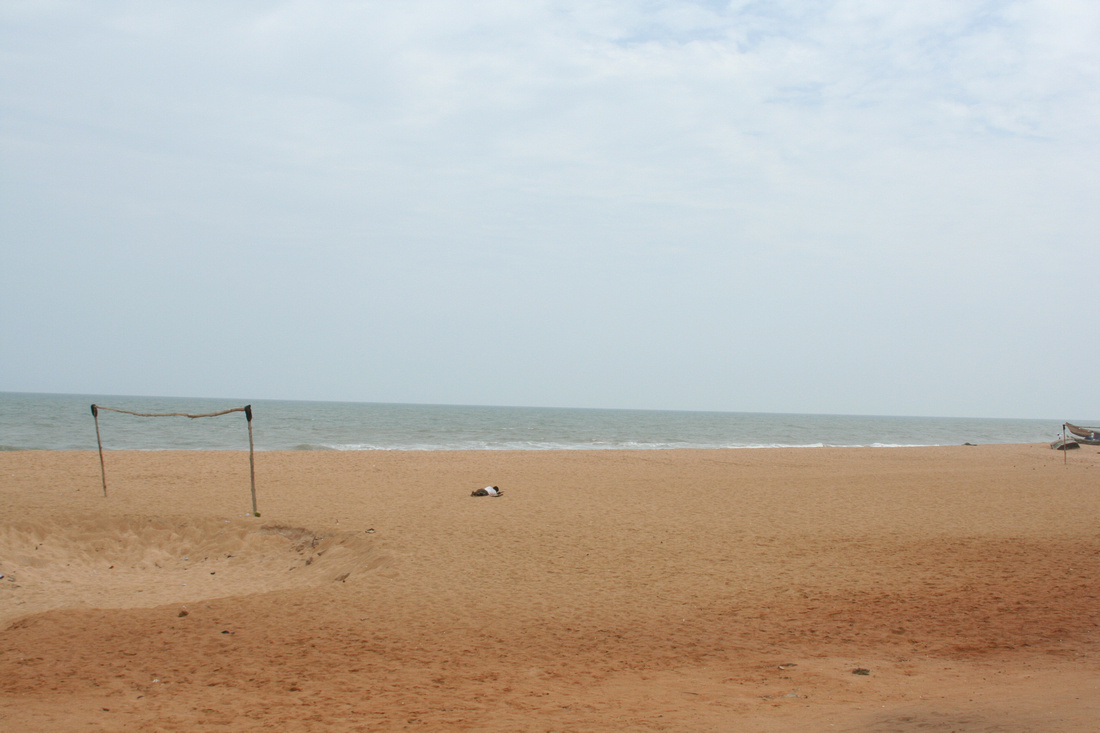 Lunch at Le Galion - a very French restaurant that appeared to be popular with expats from France. 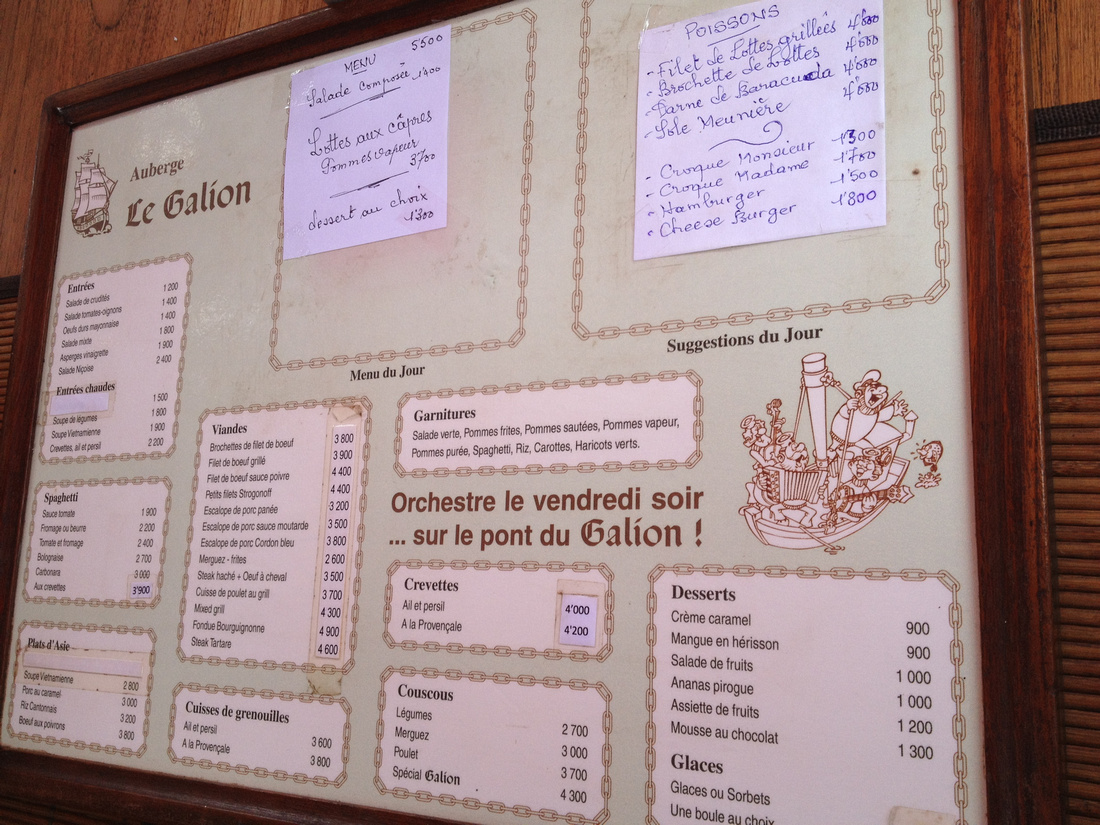 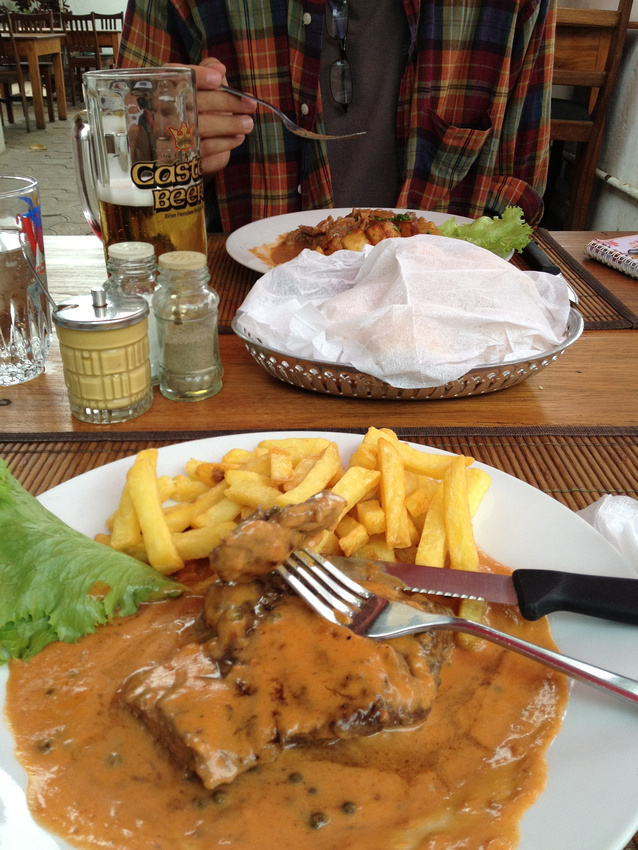 We spent the day exploring Lomé, with a good chunk of it dealing with a "diabetic" guy who needed money for an insulin shot.  This was a new one to add to the long list of scams that I have encountered in different parts of the world.  However, I have to say it was a very convincing performance.  We both bought into it at first.  We walked with the man while he went to a police station to ask where there was a Pharmacy that was open today.  Next we walked into the Pharmacy where he bought a "temporary insulin" shot that would keep him going for a few hours until he was able to get enough money to buy better insulin shots that would keep him going for the next few days.  He grabbed the temporary insulin syringe from the pharmacist, stuck it in his side, and injected the insulin.  Like I said, this was not your average scam.  So then we started reaching for our wallets to buy him the shots that he would need to keep him going for awhile...thinking that $10 should cover anything that he would need.  The pharmacist said a number in French, but I assumed that I wasn't understanding properly because it sounded like a big number.  He punched the keys on a calculator and showed it to us.  The total cost would be 124,131 West African CFA Franc.  We borrowed the calculator to convert the number from West African CFA Francs to US Dollars, and then our jaws dropped.  US$250.

Now, we both knew that US$250 was a LOT of money in most of Africa.  That is more money than many families earn in a year.  And of course, it would need to be paid in cash.  Credit card were not accepted at the pharmacy.  Now we didn't have that kind of cash with us, even if we wanted to pay that much money.  Of course, our friend didn't hesitate.  Let's go to an ATM to get some cash.  At this point, Paul and I were very reluctant to continue.  As we walked along the streets, our friend was starting to "feel sick"...must...get...more...insulin...kind of routine.  We were now 99% sure that this was a scam...but that 1% chance of not helping a person in need can sometimes be enough to cave in and give money.  We did go with him to an ATM but thankfully, very few ATMs in Ghana and Togo accept MasterCard (the only credit card that I had with me) so we were not able to withdraw any money even if we wanted to.  We gave our friend a small amount of cash (US$10), wished him well, and hailed a taxi to get out of there.

As for getting back into Ghana, we were lucky...very lucky.  The customs officer who was bribing us...I mean...arranging for our tourist visa back into Ghana, was not in the office when we returned.  He had been called into the street to deal with a fist fight at the border.  We waited for over an hour until finally, an Assistant was able to make contact by cell phone with the customs officer to get the scoop on what to do with us.  The Assistant was directed via cell phone to provide us with a tourist visa.  The Assistant hung up the phone and told us that the total would be 35 Cedi for the two of us.  Cedi is the currency of Ghana.  At the time, 35 Cedi was equivalent to about US$17.  We quickly paid, and eagerly walked back into Ghana before being spotted by the Customs Officer.

We found our driver, hopped in his car, and made our way back to Accra.

Our Togo adventure was a success...at least in terms of having a memorable experience!   Plus Togo was my 84th country that I have visited...not that I am keeping track.  Ahem.  Ok, I confess.  I am trying to visit over 100 countries, and that is why I end up having some of these crazy travel stories.  It really was a fun trip, though - a lot laughs...particularly after it was over.

Here is a photo that I took on the drive back from Togo to Accra. 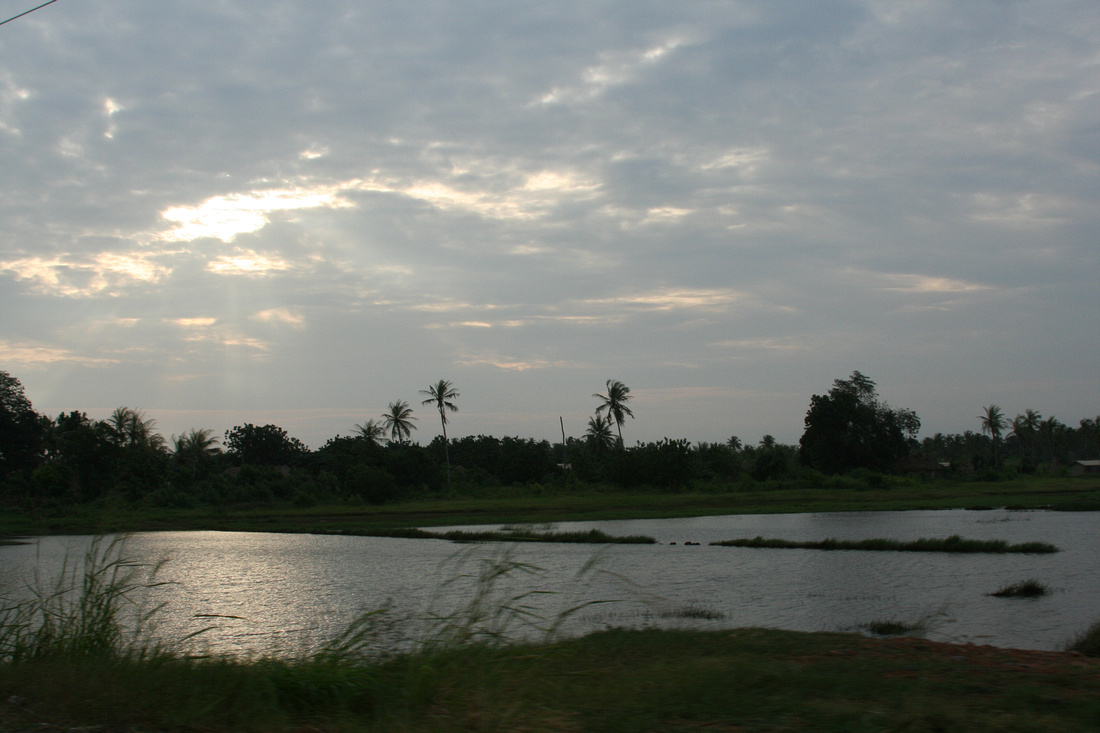 Starting the journey back from Togo border to Accra, Ghana