After about 5 ½ hours of sleep, the unwelcome sound of my alarm went off in our Sonora, Texas hotel room.  No time for alarm games with the snooze button today ... my son and I had a plane to Germany to catch!  After quick showers and a light breakfast, we were back in our Hyundai rental car and on the road for the 380 mile drive to George Bush Intercontinental Airport in Houston, Texas.

There were some snow flurries in the air, but nothing compared to what we'd experienced the day before.  Click here to read more about that.  Snow wasn't sticking to the ground, but the roads were very slippery thanks to freezing rain.  As were made our way down the highway we saw quite a few cars that had slid off the road.  Thankfully, we were continuing to descend in elevation and the temperature was climbing up to a few degrees above freezing ... things were looking up.

That's when I noticed that the gas light was flashing on my dashboard ... "25 miles remaining".  The next town was over 100 miles away.  My heart sank.  What a rookie move.  We had no option but to turn around and drive 22 miles back to the gas station that was across the street from the hotel we stayed in last night.  The last few miles were particularly "interesting" since the fuel display was telling us "0 miles remaining".  Thankfully, we made it.  I felt relieved and stupid at the same time ... fully recognizing that this 45-minute setback could easily cause us to miss our flight.

We retraced our slippery path down the highway and gradually descended into warmer temperatures.  At that point, we enjoyed several hours of driving the 80 mph speed limit on relatively dry roads.  We were making good time.

Then it started to rain ... a lot.  It was such a heavy rain that it became difficult to see through the windshield so we had to slow down yet again.  We took a quick pit stop in San Antonio to empty our bladders and refuel on an unhealthy takeout order of chicken strips and a Dairy Queen Blizzard.

The rain was so heavy at this point that traffic on I-10 had slowed to a crawl, and many cars had pulled over to the side of the road to wait for it to subside.  We kept going, albeit slowly.

As we approached the outskirts of Houston, the rain was unbelievable and we crawled our way through the last 20 miles before the airport exit.  Our gas tank wasn't completely full, but given the circumstances I didn't care about paying a fee for not returning the car with a full tank.

With an incredible sense of relief, we pulled into the covered rental car parking area.  We had been driving for 21 of the past 28 hours (a new record for me ... and one I hope to never repeat) but we made it ... and our Hyundai miraculously drove threw it all unscathed.  It was pretty amazing.

The feeling of relaxation was short-lived as it was 5:10pm ... 10 minutes later than what I estimated would be our cutoff time to have any chance of catching our flight.

We ran to the rental car shuttle (which actually felt great after all that time in the car) and eventually made our way to the correct terminal for United Airlines.  I found the nearest self-check kiosk but it didn't recognize that I had a reservation.  Instead, we had to wait in a line for assistance.  The line didn't appear to be too long, but there were only two people working behind the counter and it was taking forever to move forward.  Finally, a third employee decided to get behind the counter to help and she called us up.  I handed her my flight details and she blandly told me that my reservation had been canceled.

I'm a calm, easy-going guy, but not this time.  I proceeded to explain that there should be a record of my conversation with the customer service agent telling us that it was ok to skip our flight from Albuquerque to Houston.  "Nope, I don't see any record of that."

I then told her about the hellacious drive from Albuquerque for the past 28 hours, told her we only have carry-on luggage, and begged and pleaded for her to issue us a ticket for our original flight.

She was pretty impressed that she drove through that storm that she had seen on the news.  She agreed to call the gate to see if they would let us on, adding that it was probably too late to get on the flight as it is now considered closed.

After an agonizing 30 seconds, where she explained our situation and explained that we had drove through the storm from Albuquerque to get here, she put down the phone and gave us the verdict: "That must have been Santa Claus on the other line because they agreed to issue you a ticket."  Whew.

But, there was a catch.  Our flight was in a different terminal and they would not be holding the plane for us.  We would have to hope that we could get through security and make our way to the other terminal before they closed the gate.  The odds didn't sound great, but I thanked her profusely and said that we'll give it a shot.

Thankfully, I have TSA pre-check and was able to dodge the long line.  We would have been doomed at the back of that line.  A few people overhead that we had driven from Albuquerque and they were kind enough to let us cut in front of them.  I gratefully accepted the offer.

We made it through the metal detectors, but then the security pulled my son's backpack off for additional screening.  Erik had left unopened drinks in his backpack.  Great.  Another few precious minutes wasted.

As soon as the backpack was in my son's arms, we ran at full speed all the way to Gate C-16.  Miraculously, the gate door was still open.  We breathlessly explained our situation to the agent at the ticket counter and she smiled - "Are you the ones who drove from Albuquerque?"  Yep, that's us.  She laughed and said that she couldn't believe that we had made it through that storm.  I told her that it took us 21 hours to cover what should have been a 14-hour drive.  She smiled and said that she would take care of us, and gave up an upgrade to Economy Plus so that we would have plenty of room.  We both said a heartfelt thank you and we boarded the plane.

I could now see what the agent met about giving us plenty of room.  Virtually nobody was in our section of Economy Plus, so Erik and I could each have our own row.  That sounded like paradise to us.

I called my parents to tell them our story and put their mind at ease.  I also sent along this selfie of Erik and I safely in our seats, after an adrenaline-filled 28 hours. 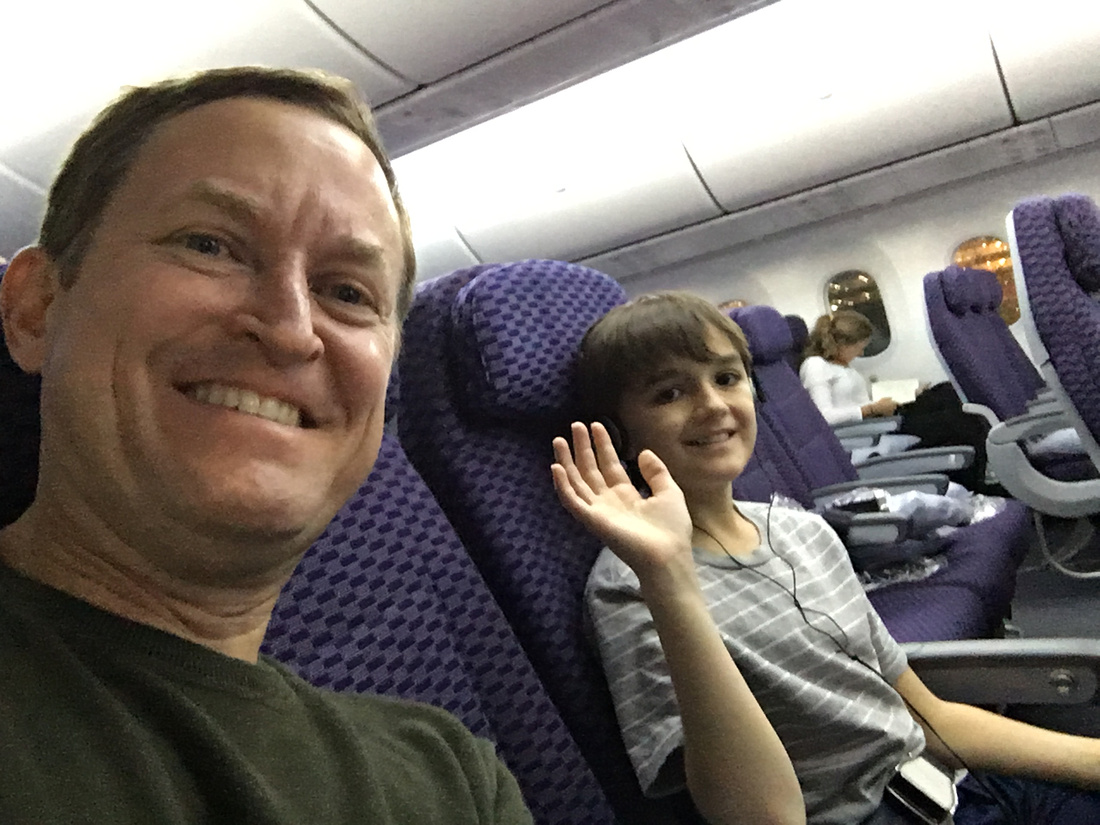 The gamble had worked ... with literally only minutes to spare.

We were now back on track for our European adventure.  In hindsight, I should have given us a day of slack upon arrival in Frankfurt, rather than make a string of non-refundable hotel and boat reservations for our tightly planned (unfortunately) trip.  Lesson learned.

As soon as our plane took off,  Erik and I each grabbed our own row of seats and we each slept all the way through until the flight crew started serving breakfast about an hour before our arrival in Frankfurt.