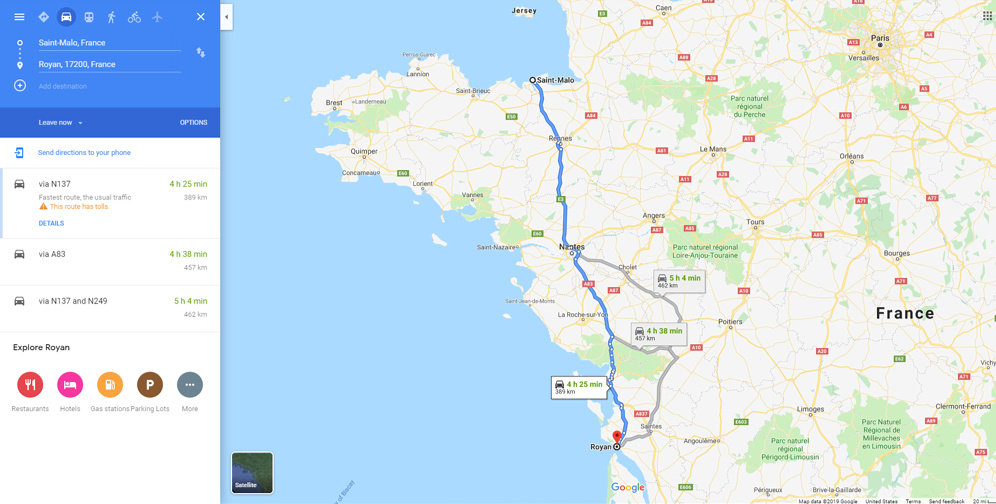 After a decent night of sleep (finally getting over jet lag) in St. Malo, followed by a big breakfast, we were ready to hit the road.  Next stop: Royan, France.

It was an uneventful drive to Royan, other than issues getting access to cash.  ATMs were nowhere to be found in the gas stations we visited along the way.  This didn't bother me until I discovered that my old-school credit card (without a chip) wasn't working on any of the credit card terminals.  Thankfully, on the fifth try, the cashier managed to get my card to work by swiping it on an older credit card terminal that they kept in the back.  I made a mental note to carry extra cash so that my son and I wouldn't have to spend a day washing dishes.

After a nice drive through rural parts of France, and passing through the cheese mecca of Roquefort, we made it to our destination: Hôtel Cordouan Thalassothérapie et Spa in Royan.  Hôtel Cordouan is a 4-star hotel with an excellent restaurant, spa, and nice location on the Bay of Biscay.  Here are some photos of the hotel and room: 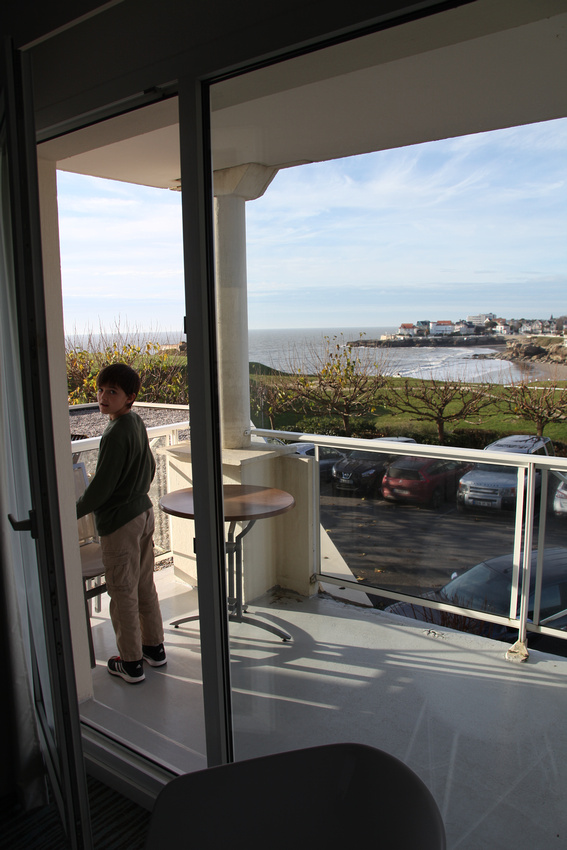 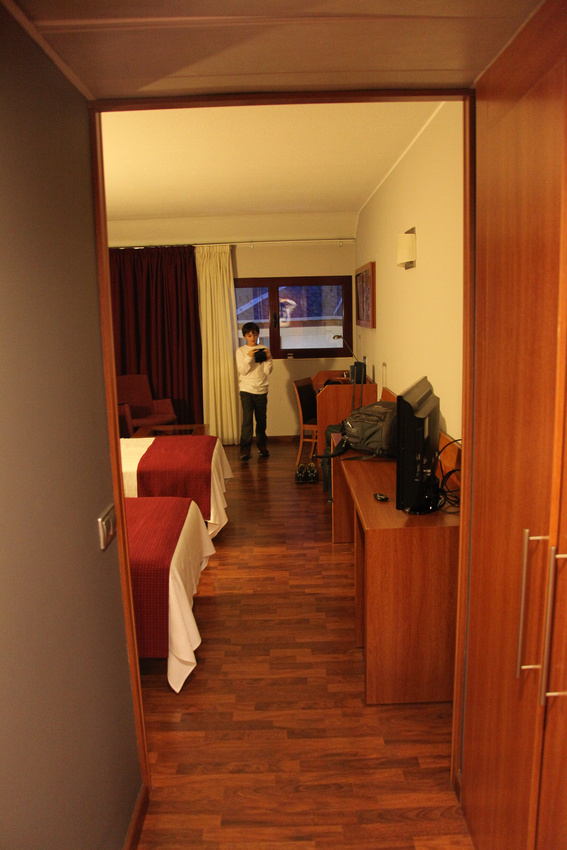 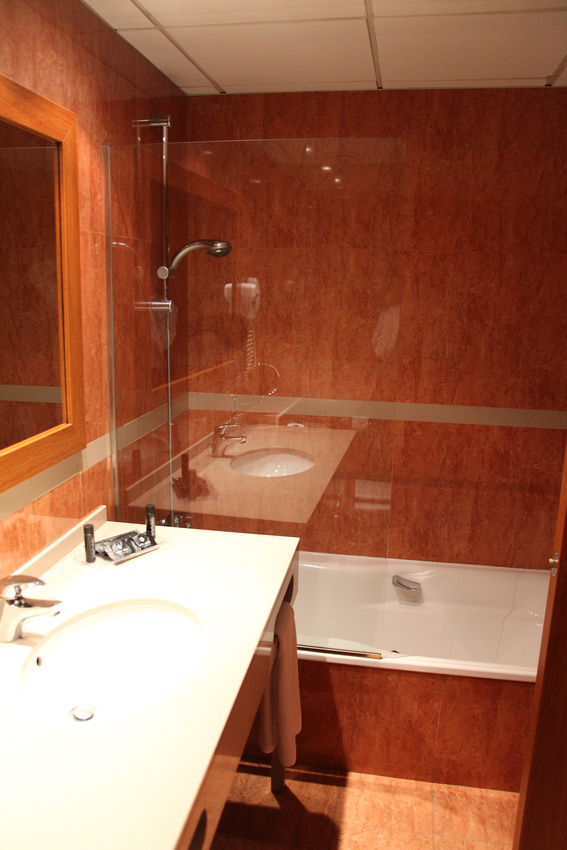 Of course, I had some explaining to do when Erik viewed the scene below ... the first bidet that he'd ever seen. 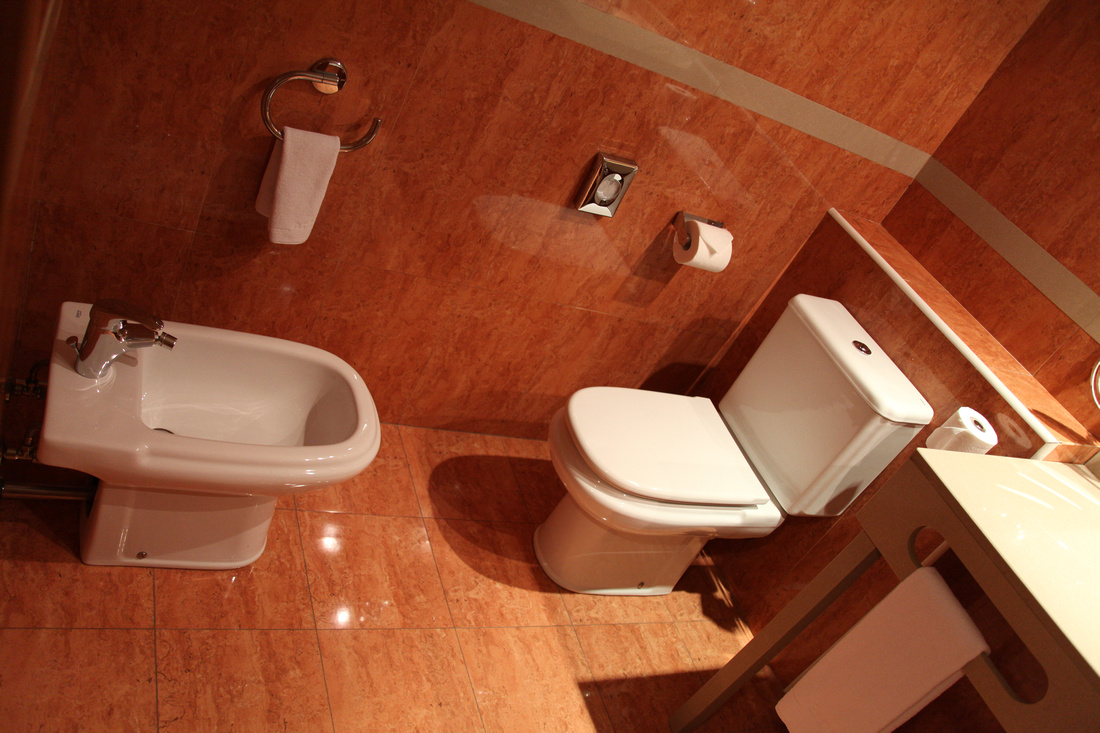 But there was one thing that caught Erik's attention more than anything else ... something that made him resemble a sled dog eager that was eager to run ... grass, and lots of it! 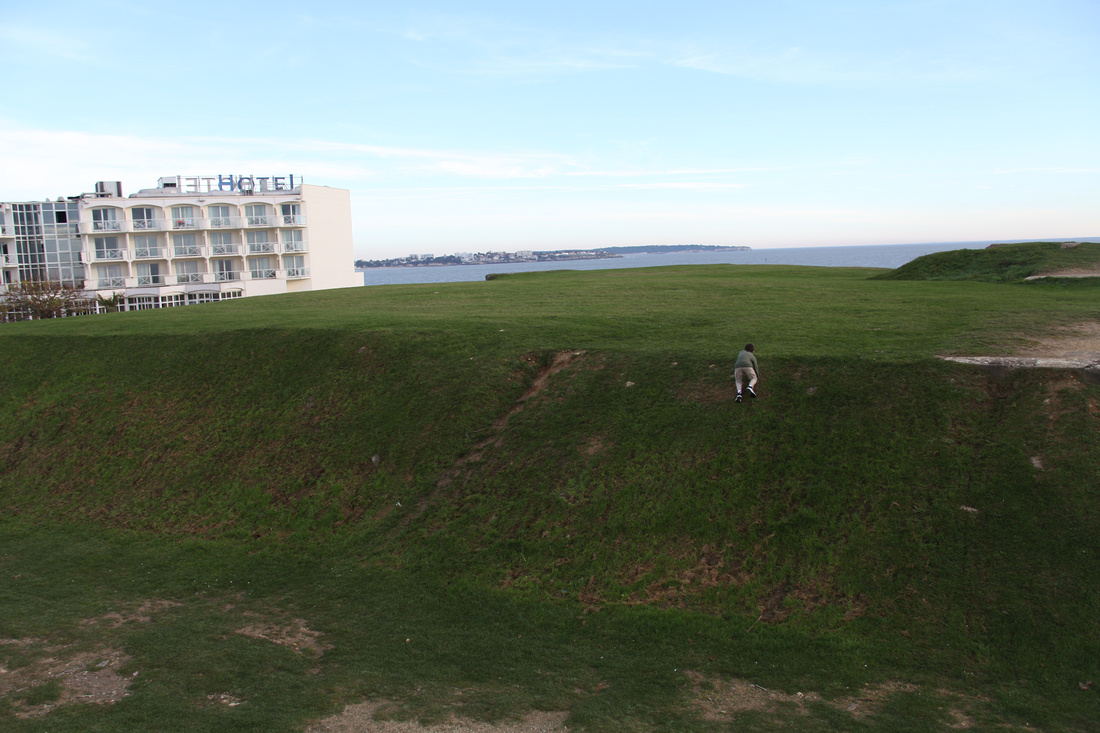 He couldn't believe how much grass there was all around us.  It's not exactly a common site in Albuquerque, New Mexico.  I turned him loose and off he went.  He ran up hills, slid down hills, did parkour rolls, and basically ran around the area like a mad man ... which was just what the doctor ordered after spending so much time in the car.  I could only get him to stop briefly to take a quick photo for me, and then he was off again.  But then he suddenly stopped in his tracks.  He had spotted a nice-looking Samoyed dog ... which of course we went over to see. 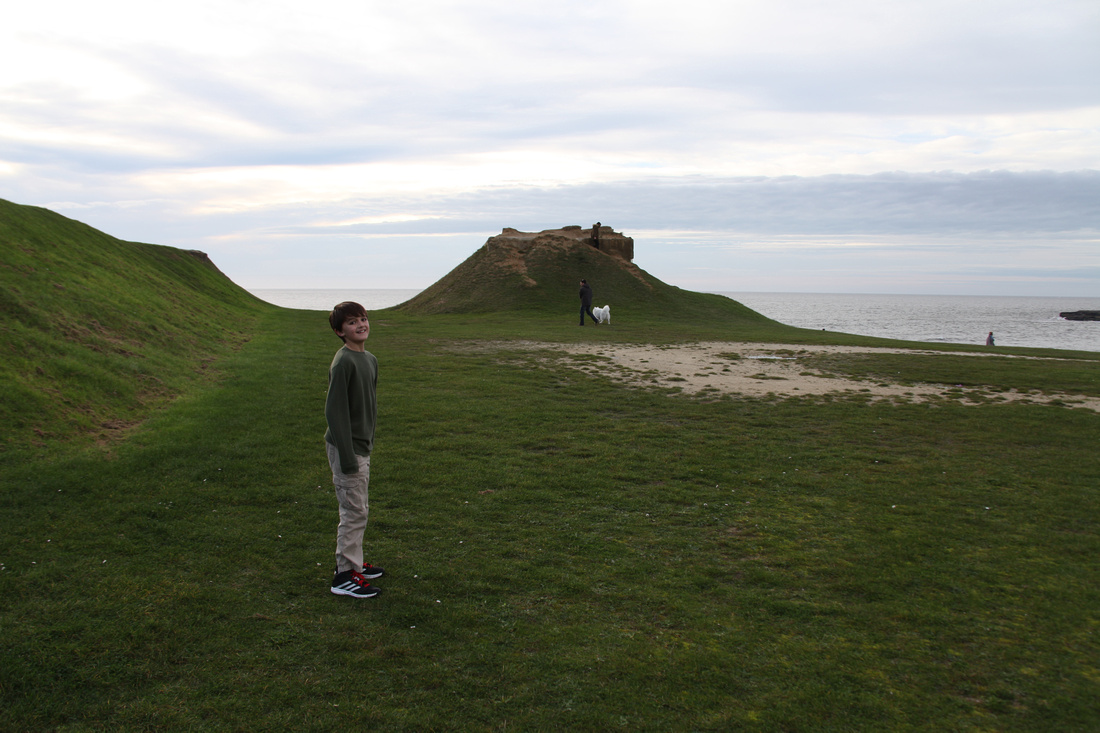 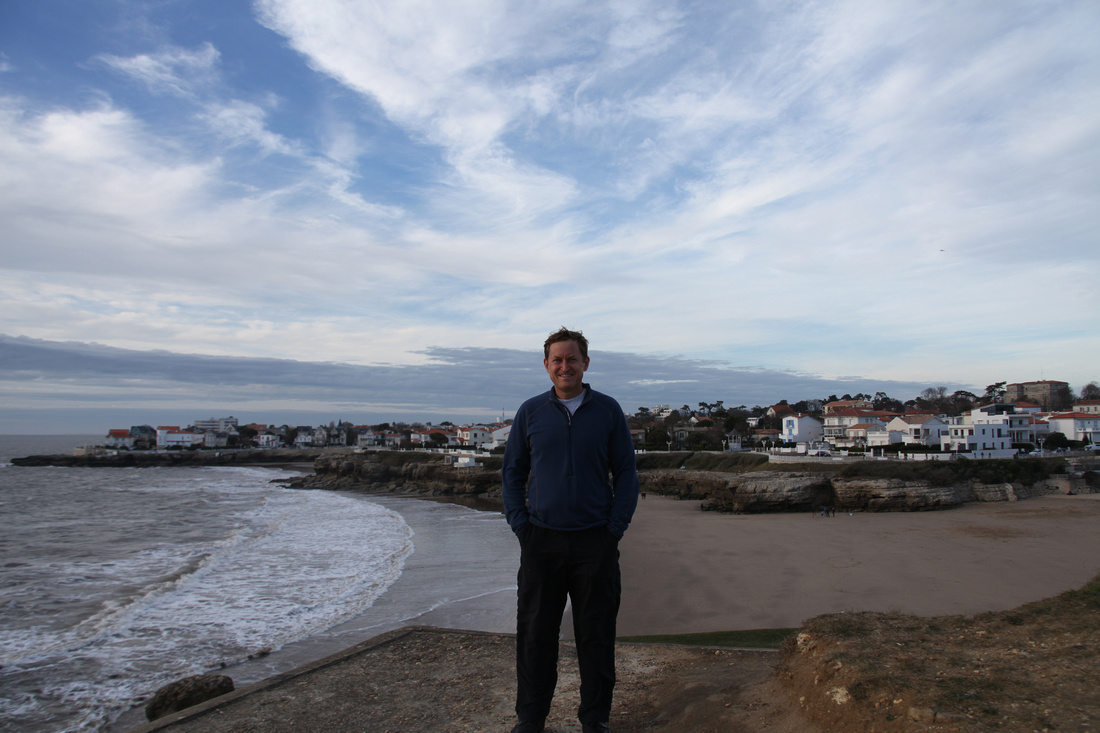 After a short break to visit the dog, we then went for a jog along the trails that lined the coast, stopping to use the exercise stations of the parcourse (fitness trail) along the way.  It felt great. 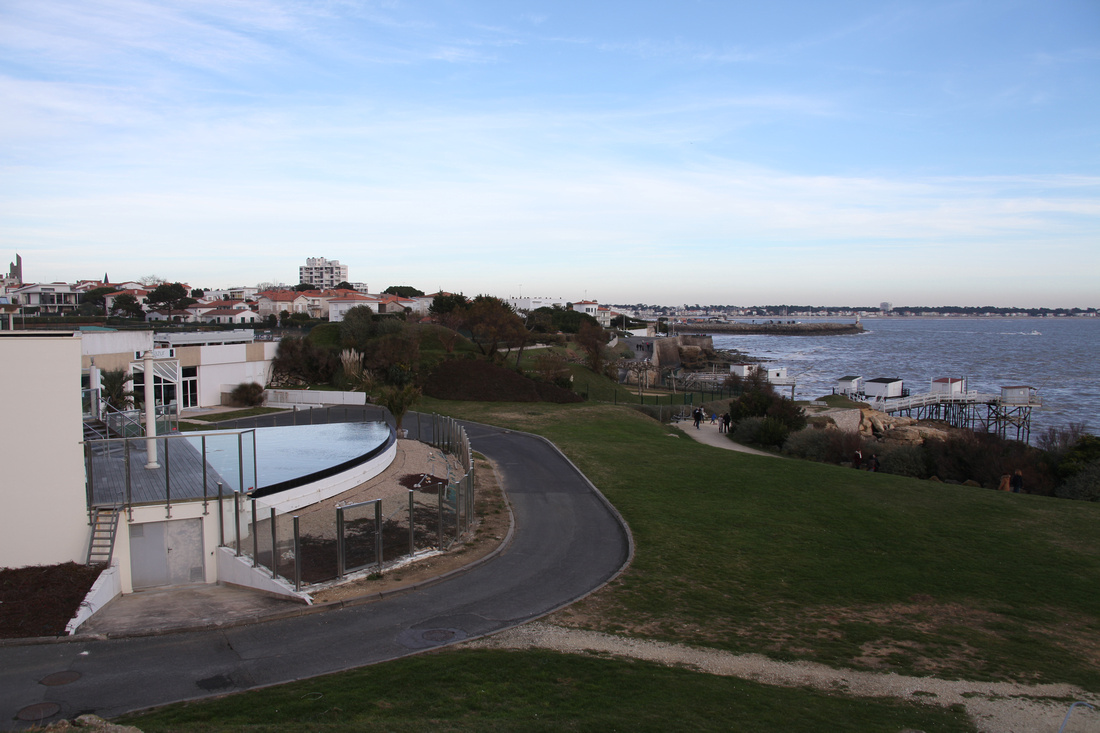 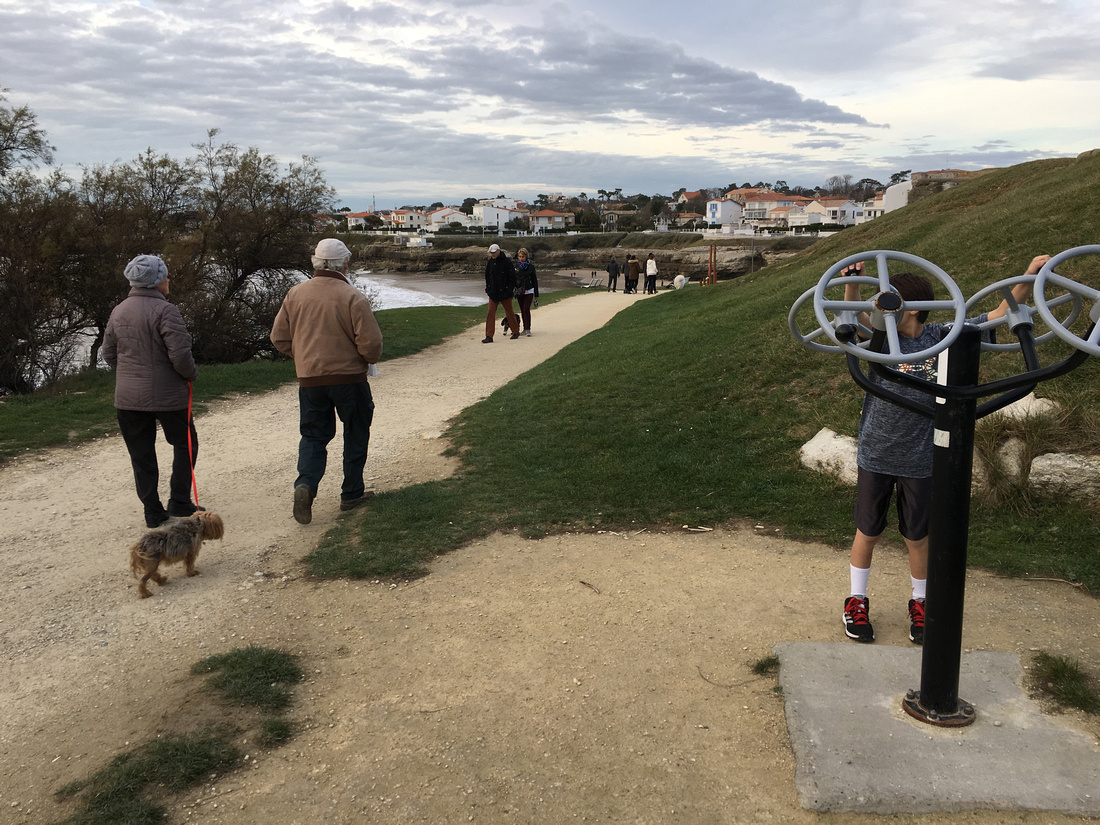 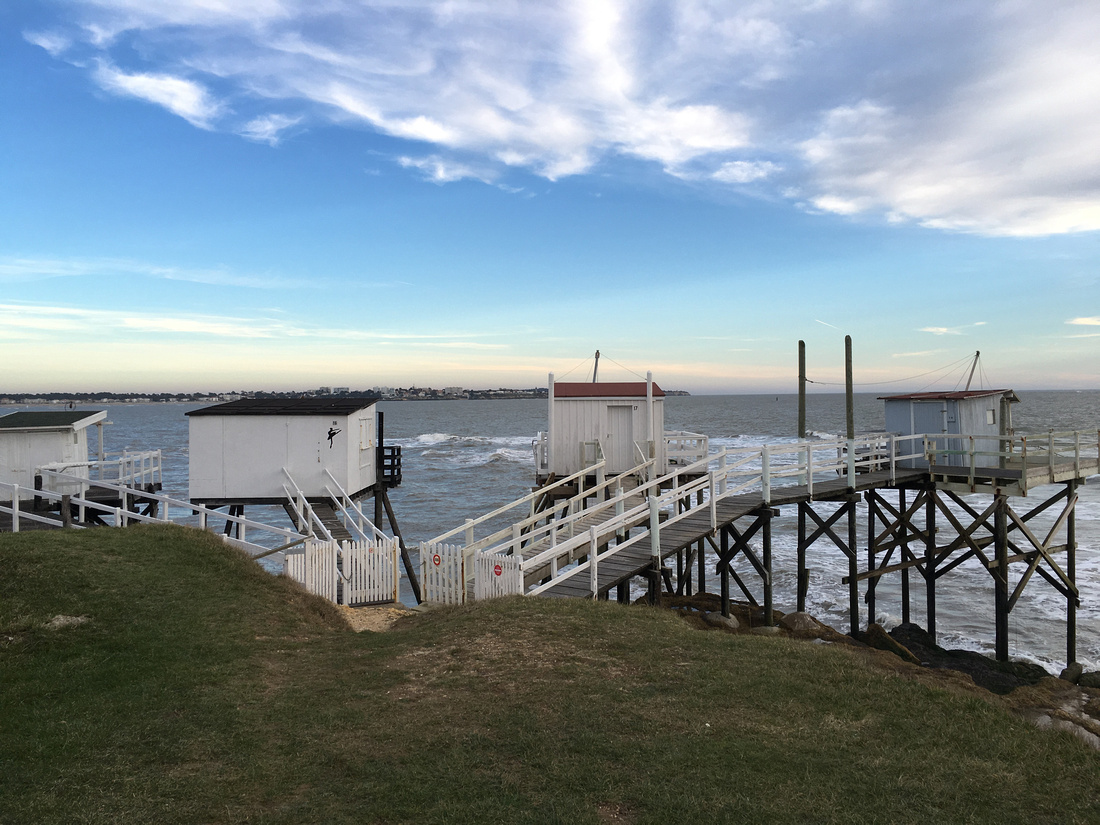 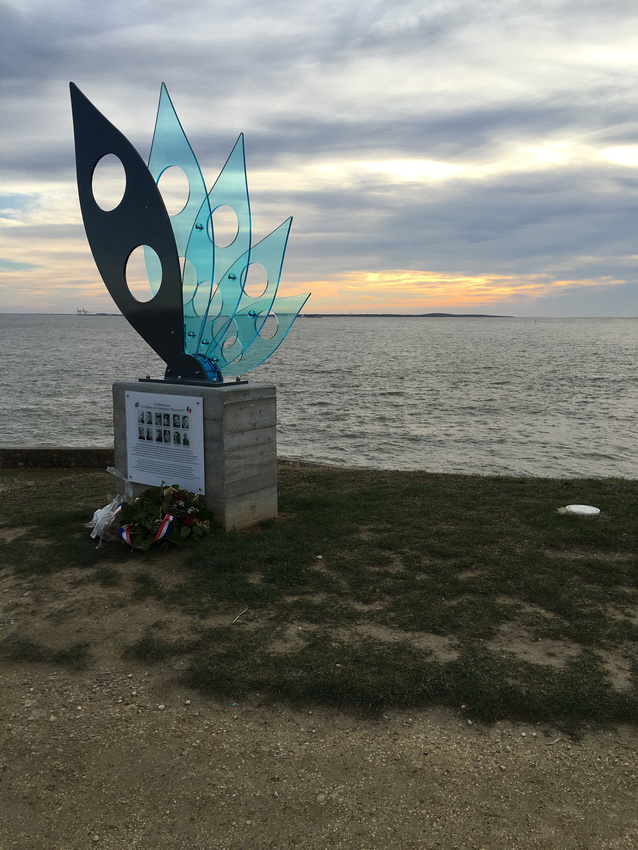 A War Memorial along the trail 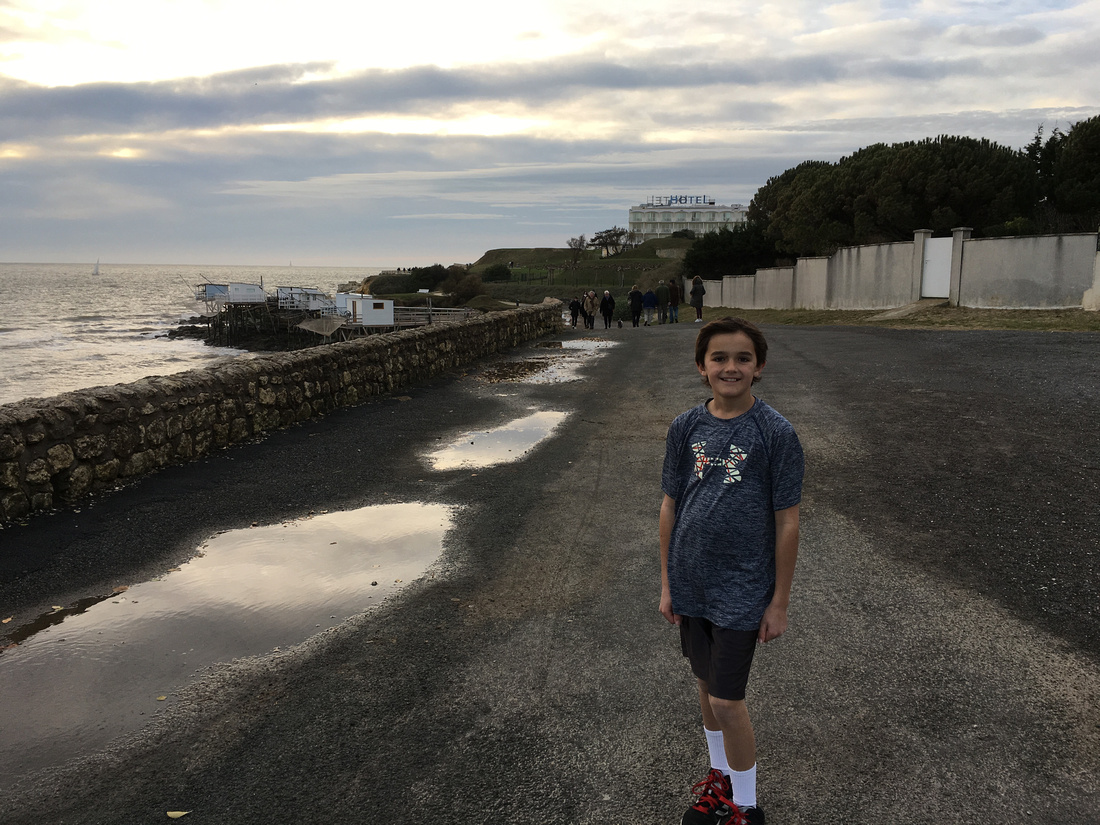 After that healthy dose of exercise, we decided to check out the spa that adjoined our hotel.

We weren't really sure what we were getting ourselves into, but we put on our swimsuits and hotel bathrobes that were in our room and made our way to the spa. 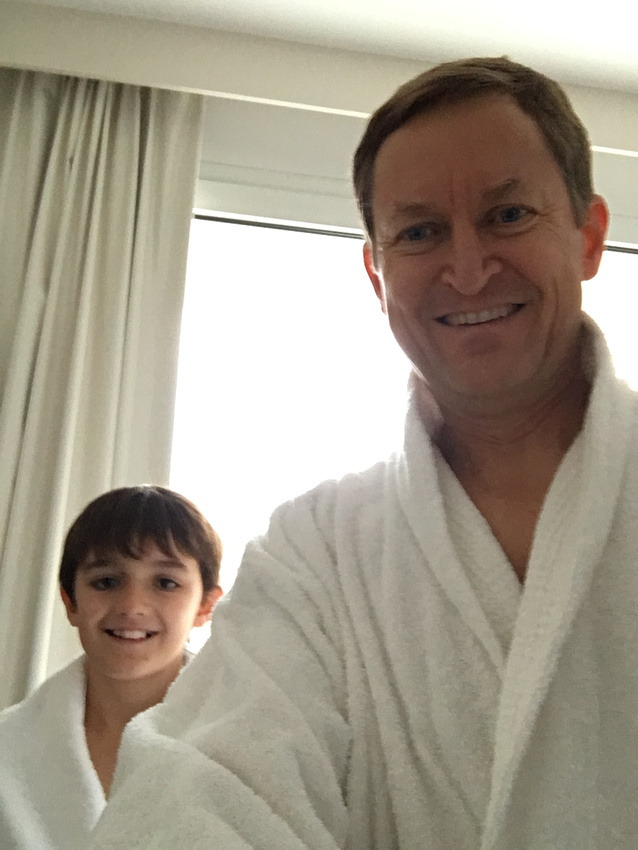 We quickly learned that this wasn't just any spa, this was thalassothérapie ... which I had to look up to figure out what the heck that meant.  I learned that it refers to saltwater therapy.  There was a pool (not the kind for swimming laps) with hot tubs, underwater stationary bikes, and various stretching bars in the water.  They required us to wear sandals, so we purchased simple sandals for 3 euro each.  These sandals came in handy during our trip.  After that, we just imitated the locals and enjoyed the experience of trying out the different water therapy options and going into the steam room with lots of eucalyptus in the air.

Here's a photo from the spa website, since I didn't carry a camera to the spa.

After our spa experience, we made our way back to our room to get cleaned up and ready for our 7pm dinner reservation in the hotel restaurant.  It was an interesting, expensive menu, and the food turned out to be excellent.  I chose the Special of the Day, which featured something that I don't see every day in New Mexico ... stingray.  It was a first for me.  The stingray was served with vegetables and a salad that included dried apricots rolled inside ham.  For dessert, I had crème brulée with vanilla from Madagascar.  Erik opted for the filet mignon, pommes frites, and a smarties ice cream pushup for dessert.  As you can tell, we weren't exactly slumming it that night.

After a great meal, where Erik's lack of knowledge of fine dining etiquette both amused and horrified me, we went back to our room to relax.  A short time later, as the active, decadent afternoon and evening hit us, we were off to bed, glad that we made the choice to come here.

Tomorrow morning, we're off to Andorra.

Keywords: how to visit 15 countries in 20 days, how to visit 15 countries in 20 days with a 10-year-old and enjoy it, Mark Aspelin, Mark's Travel Blog, MarksTravelBlog.com, Royan, Royan France, St. Malo, travelers century club, travelers' century club, traveling through europe with a child, traveling to europe with a child
« Previous Post Next Post »