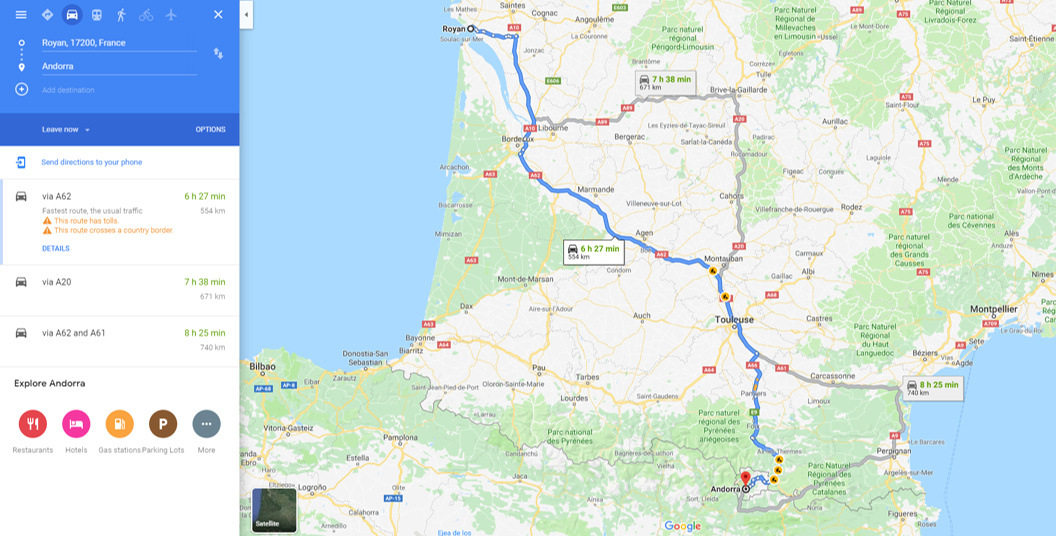 It was New Year's Eve and after enjoying breakfast at our hotel in Royan, France, it was time to hit the road.  Our destination was a new country for me ... Andorra!

On New Year's Eve / Day, I like to set aside time to evaluate the year that's coming to an end, and set new goals and plans for the year to come.  Unfortunately for my son Erik, we had a 6.5 hour drive ahead of us and he would be a captive audience for this ritual.  To get the creative juices flowing, I played the audio portion of "Living Your Best Year Ever" and part of the "Entrepreneur Rollercoaster" audio book (both are written by Darren Hardy) during our long drive.  To my astonishment, Erik actually seemed interested in the entrepreneur stuff and stunned me at one point when he asked, after I was taking a break from the audiobooks, if we could start the next section.  I somehow managed to keep the car on the road despite the shock.

As we started to approach Andorra, the road started to wind its way up through the mountains.  We stopped to get some gas and I asked (in French) if the person spoke French.  He said "No".  I then asked (in Spanish) if he spoke Spanish and he said "No ... Catalan!".  Whoops, I forgot.  Rest assured, after his rebuke, I won't forget that Catalan is the official language of Andorra.

The fog and traffic made for some slow driving, but we finally made it to the semi-chaotic streets of the city center of Andorra La Vella.

Andorra la Vella is a city of about 22,000 people in the Pyrenees mountains (between France and Spain) at an elevation of 3,356 feet, making it the highest capital city in Europe.  That latter factoid surprised me as it sounded awfully low to me.  Heck, my house in New Mexico is at an altitude of 7,000 feet.  But I reminded myself that Kathmandu was a similar experience for me ... surrounded by spectacular mountains while the city itself was at a humble 4,593 feet.  The setting of Andorra la Vella makes you feel like you are high up in the mountains, even if you're not.  Here's a photo from the Andorra tourism site. 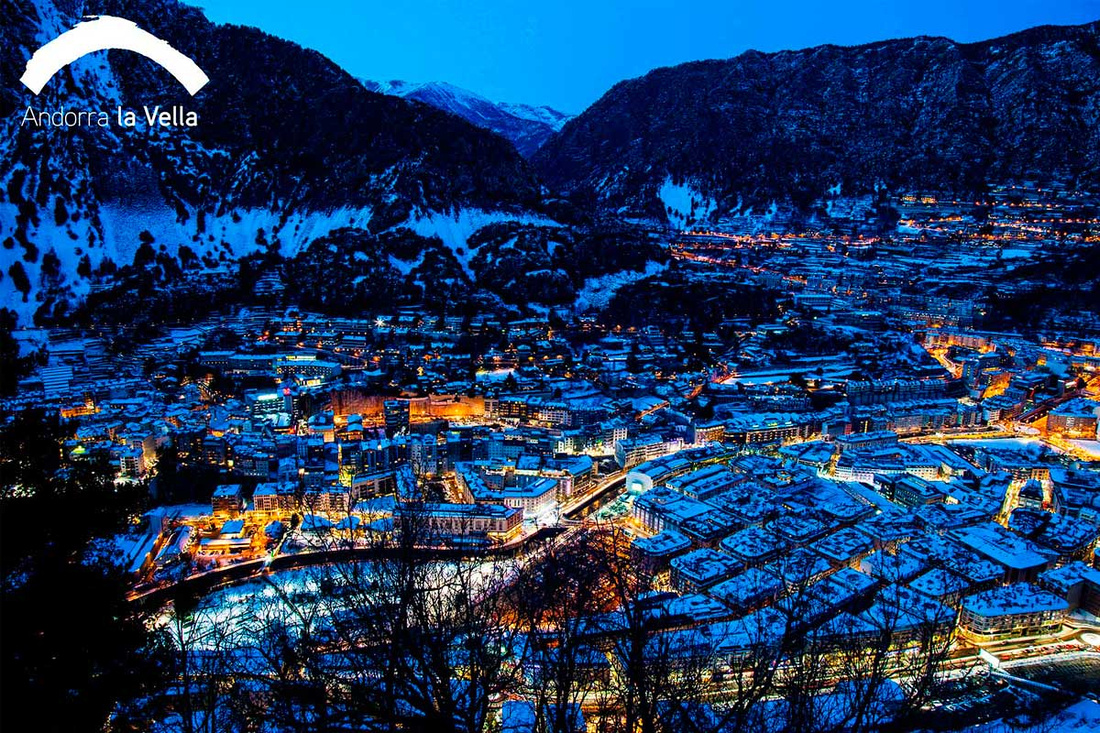 We found a place to park on the street and checked into the Acta Art Hotel – a 4 star hotel and spa in the the heart of Andorra la Vella.  Our room had a modern feel with wood floors and furnishings.  All of the photos below are from the hotel website ... with the exception of one relatively lame photo that I took from the window of our room. 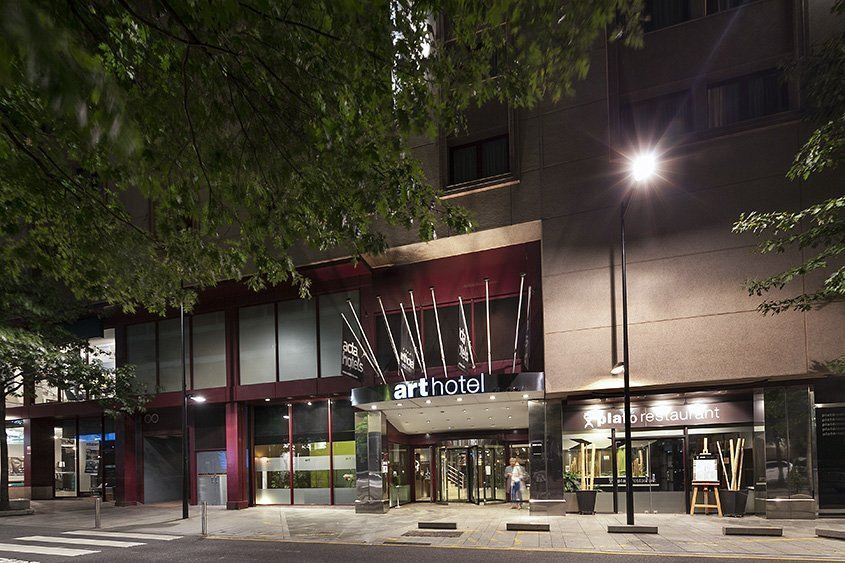 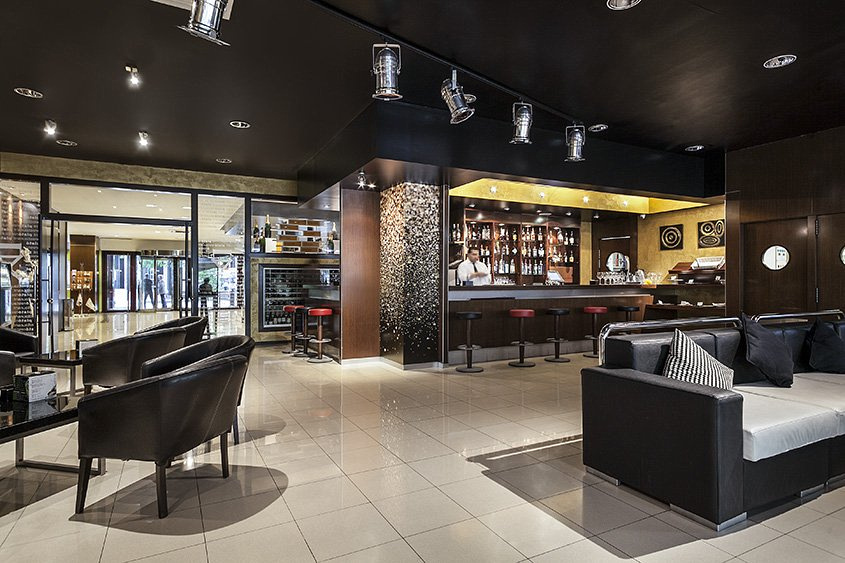 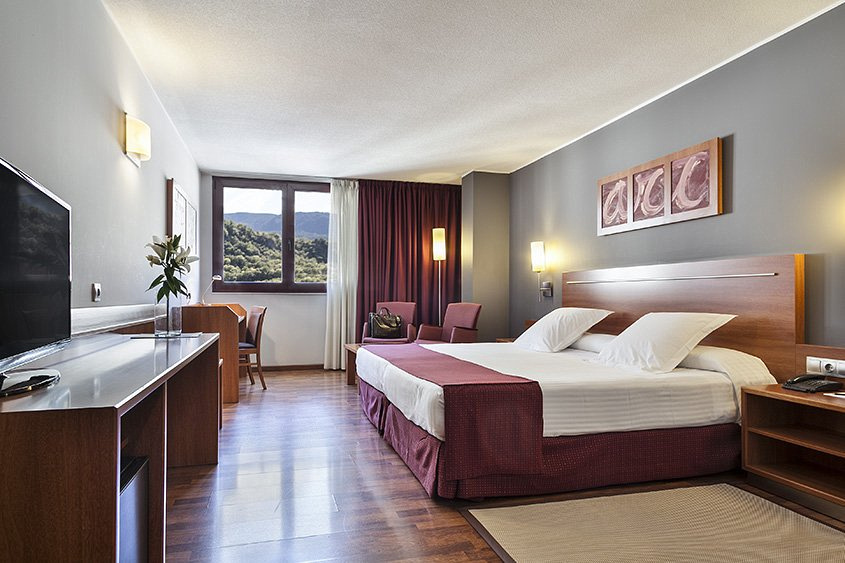 After our long drive, the hotel spa sounded mighty appealing so we decided to check it out.  There was a large, shallow, rectangular hot tub (not very hot, but comfortable), with 3 silver strips underwater that you sit on to make the jets turn on.  Outside of the water, there was a chair made of heated tile, along with other non-heated chairs, in addition to a sauna and steam room with marble tile and eucalyptus.  Though he's just a youngster, Erik seems to enjoy the spa experience.  We had the place all to ourselves, so that certainly helped.  Here are some photos of the spa from the hotel website: 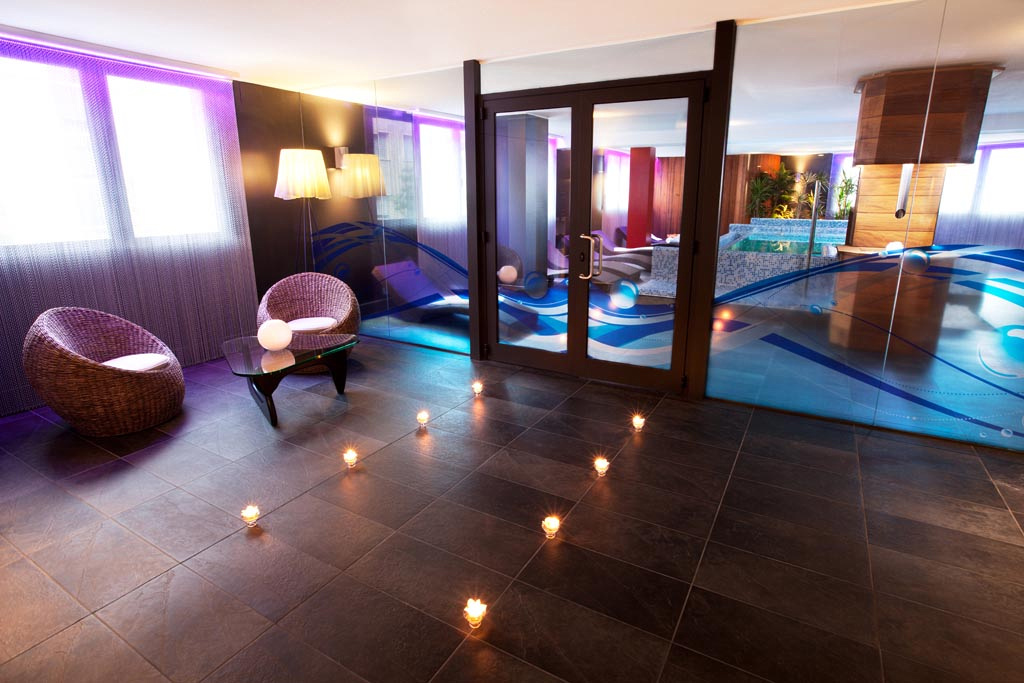 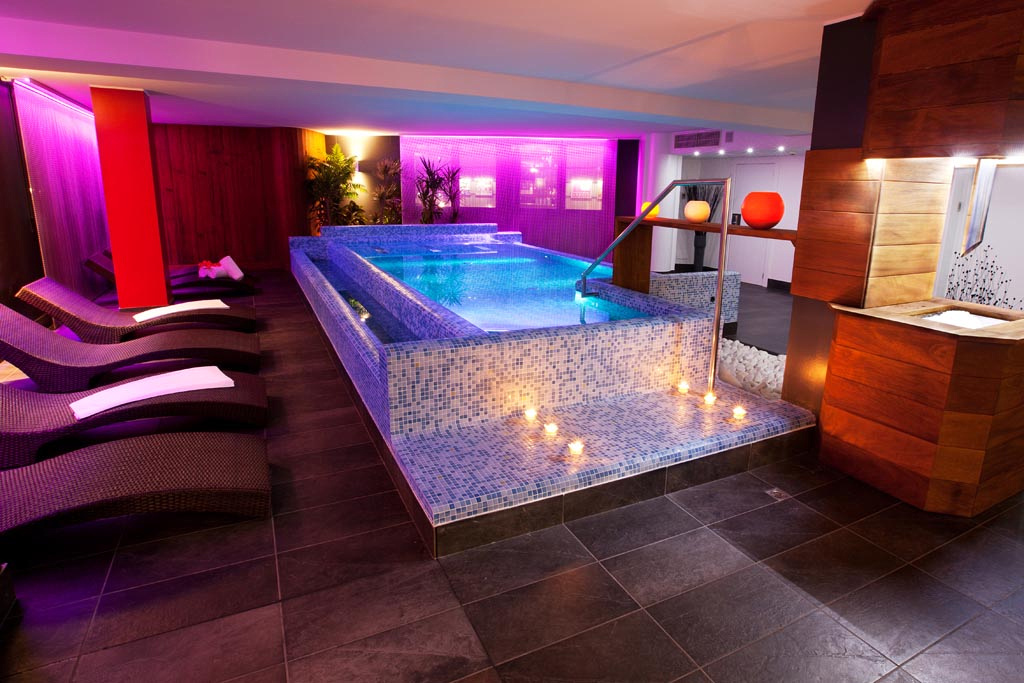 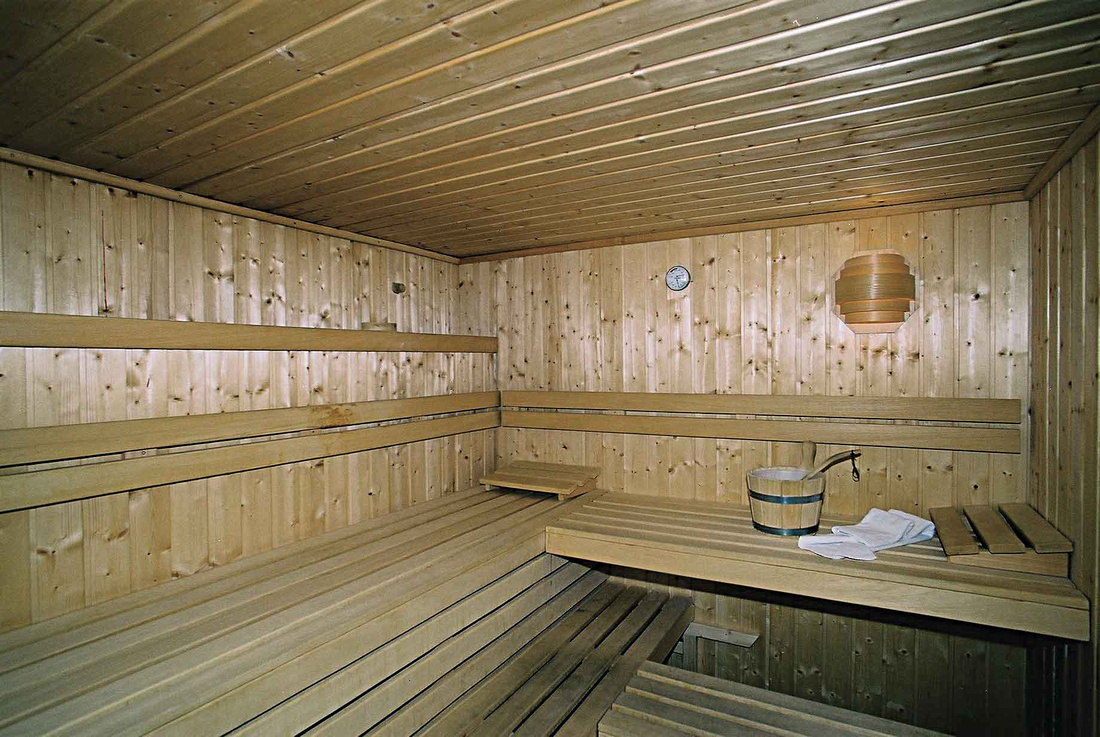 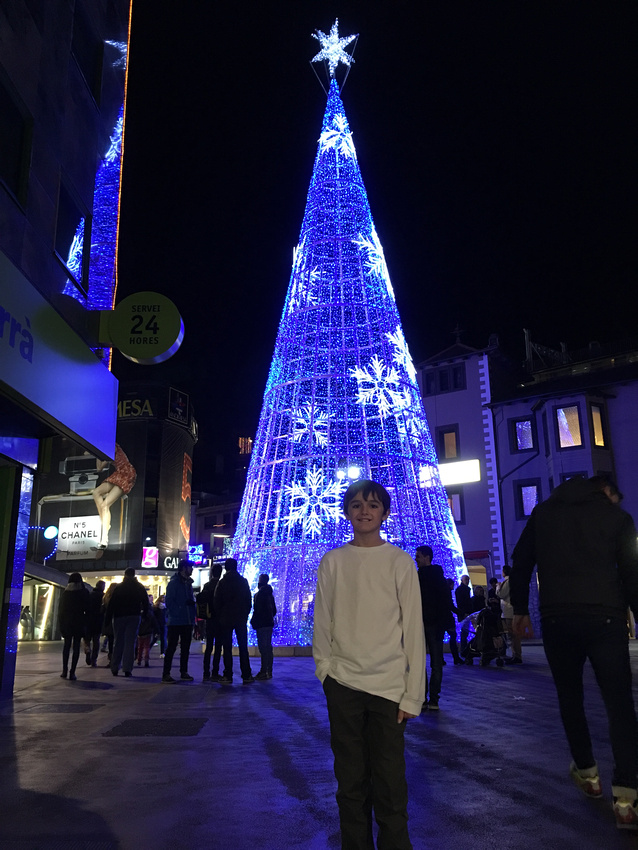 Eventually we started to pop our head into restaurants to inquire about dinner.  We gradually started to figure out that no restaurants were open for a "normal meal" ... each restaurant had a special set menu with at least five courses that would take multiple hours.  On top of that, everything was already booked.  The idea of sitting down for several hours was not an appealing option for a 10-year old, so I asked about a simple meal ... or even takeout if necessary.  Nope, that's not an option.  We couldn't even get a slice of pizza.  Every seat in Andorra la Vella appeared to be fully booked.

We circled back to our hotel to try our luck there but it was the same story.  After LOTS of walking all over town, we finally found a person who offered to let us reserve two seats for a fancy meal (65 euro per person) as long as we were ok with sitting on bar stools for several hours.  After seeing the look of horror on Erik's face, I politely declined.

The look of horror soon shifted to my face once I realized where we would be eating our New Year's Eve meal in Andorra.  Our only viable option was ... 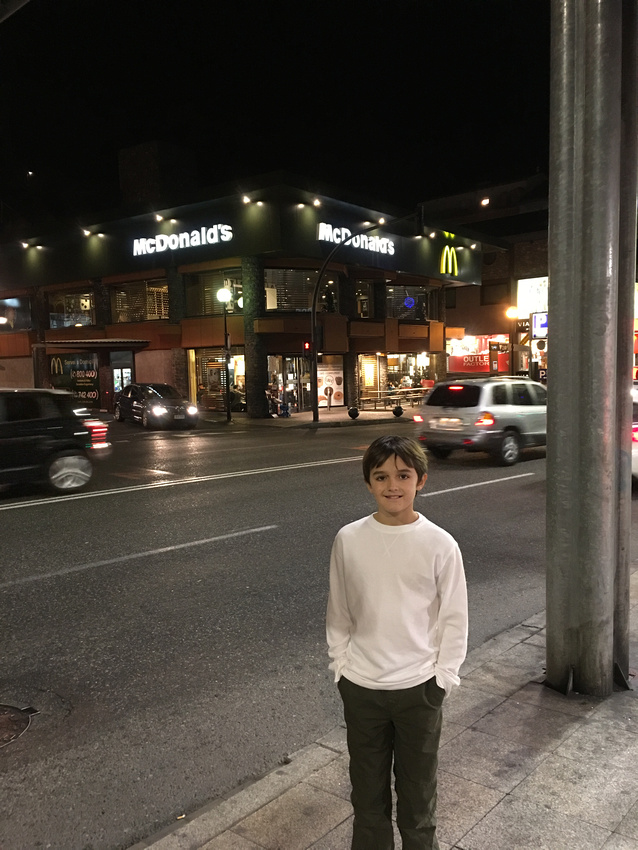 ... McDonald's.  It was hilarious.  I never eat McDonald's at home, let alone on trips abroad, so Erik couldn't stop laughing at his good fortune (he loves McDonald's) and the fact that I would have to join him. 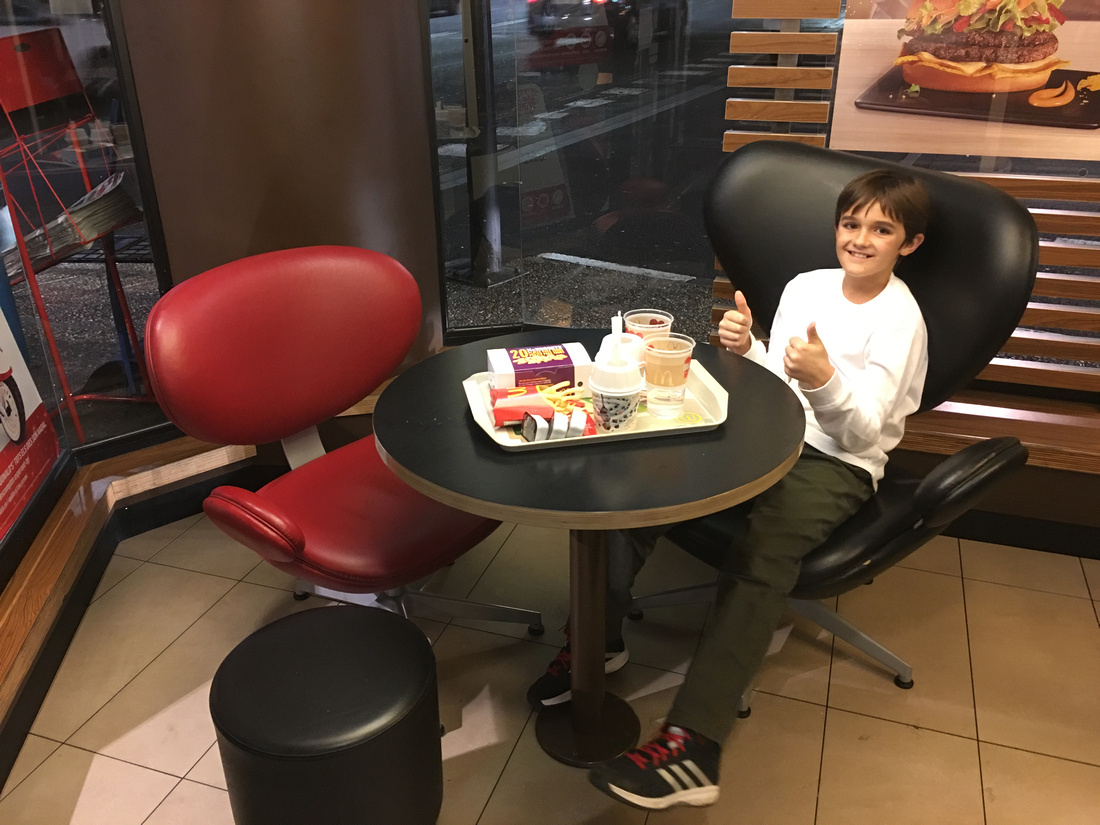 Our New Year's Eve meal consisted of sharing an order of 20-piece chicken McNuggets, fries, and a Kit Kat sundae (Erik got chocolate and I got caramel).  Total cost 14 euro …  which I admit was a nice contrast to our other option of 130 euro.

Another young couple was also there so I asked if one of them could take a photo for us to capture this classic moment.  Funny enough, they were from Finland!  Once they learned that I am half Finnish and my dad was born in Finland, we had a fun conversation.  It turned out that they had the same problem of finding a place to eat before they drive back to Barcelona (where the woman currently lives) to catch the fireworks.

All in all, it turned out to be a fun and memorable meal for us ... and I have to confess that this McDonald's was pretty nice. 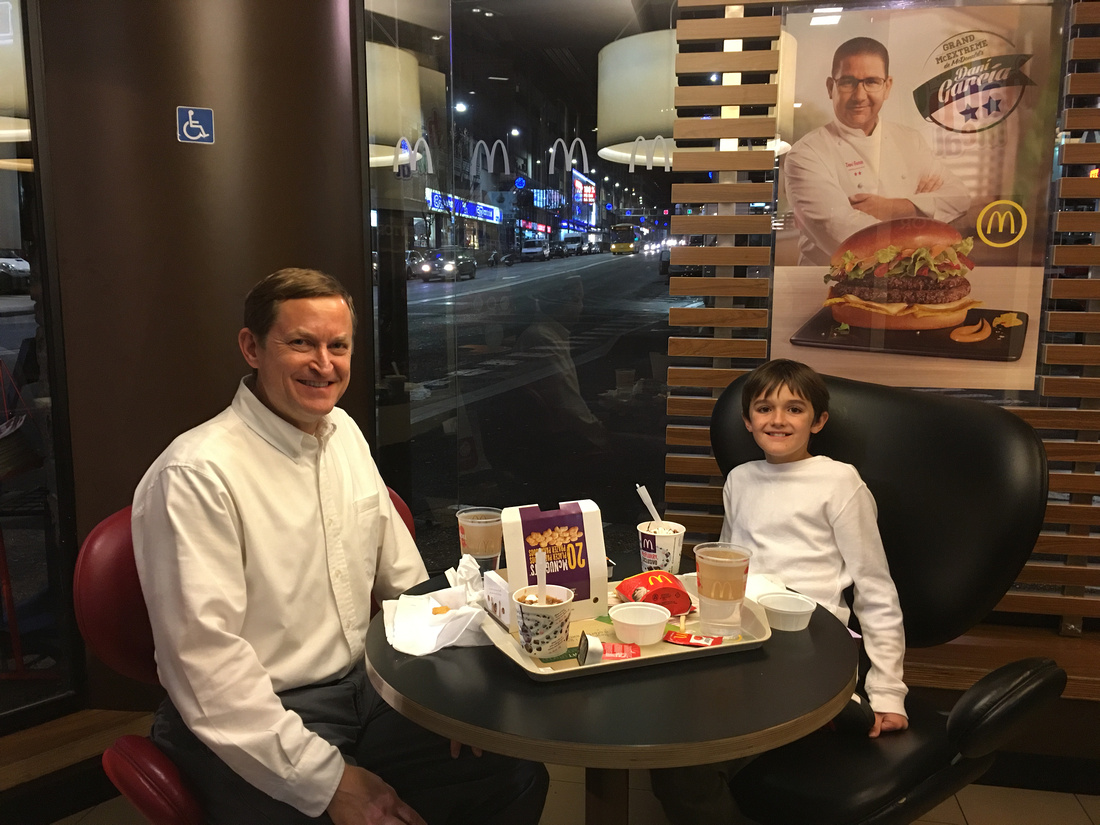 After dinner, Erik and I walked around town a bit more before making our way back to the room, where we spent an hour talking about our previous year and our goals and plans for next year (do we know how to party or what!).  I was impressed that he took such an interest in it.

We never made it to midnight, and had no intention of trying.  Around 10pm we killed the lights and called it a year after a fun evening in Andorra la Vella ... and McDonald's.

Keywords: Andorra, Andorra la Vella, how to visit 15 countries in 20 days, how to visit 15 countries in 20 days with a 10-year-old and enjoy it, Mark Aspelin, Mark's Travel Blog, MarksTravelBlog.com, New Year's Eve in Andorra, travelers century club, travelers' century club, traveling through Europe with a child, traveling to Europe with a child
« Previous Post Next Post »