We've all heard the famous quote from Chapter 64 of the Tao Te Ching that "A journey of a thousand miles begins with a single step."  Well this journey was well over a thousand miles, and it began with a major snowstorm.

It was the morning of December 26, 2015, the day after Christmas, and I just heard the news that blizzard conditions, with up to a foot of snow, were expected where I live, and Albuquerque Airport was expecting 5-7 inches of snow.  Given that City of Albuquerque seems to cancel school if there's even an inch of snow on the ground, I didn't have warm, fuzzy feelings that my 11:00am flight to Houston the next day would depart on time.  We only had a 90-minute layover in Houston before our flight departed for Frankfurt, Germany.

I called United Airlines to explore our options and it didn't sound good.  The most likely result would be an overnight in Houston.  After studying the weather patterns a bit more closely, it looked like our best option was to rent a car and try to beat the storm by taking a southern route through Las Cruces, El Paso, and on to Houston ... and estimated 14-hour drive.  After another 20-minute call with the United Airlines agent, the agent gave us the ok to drive to Houston, skip our ABQ - Houston flight segment, and catch our original Houston - Frankfurt flight.

As soon as I got off the phone with United, I told my son to get packed as we're hitting the road.  We went over to my parents' house to inhale a lunch that my mom thoughtfully offered to prepare.  Then we put our things in my dad's truck, and he drove us to the Albuquerque airport to pick up a one-way rental car that I just reserved.  It was about 12:30pm and the snow was already starting to fall at our house.

After a 35-minute drive to the airport, we picked up our rental car key, shook hands with my dad as he wished us luck on our trip, and we were off in a white, Hyundai Elantra.  I was hoping for a 4-wheel drive vehicle but unfortunately that wasn't an option given the short notice. 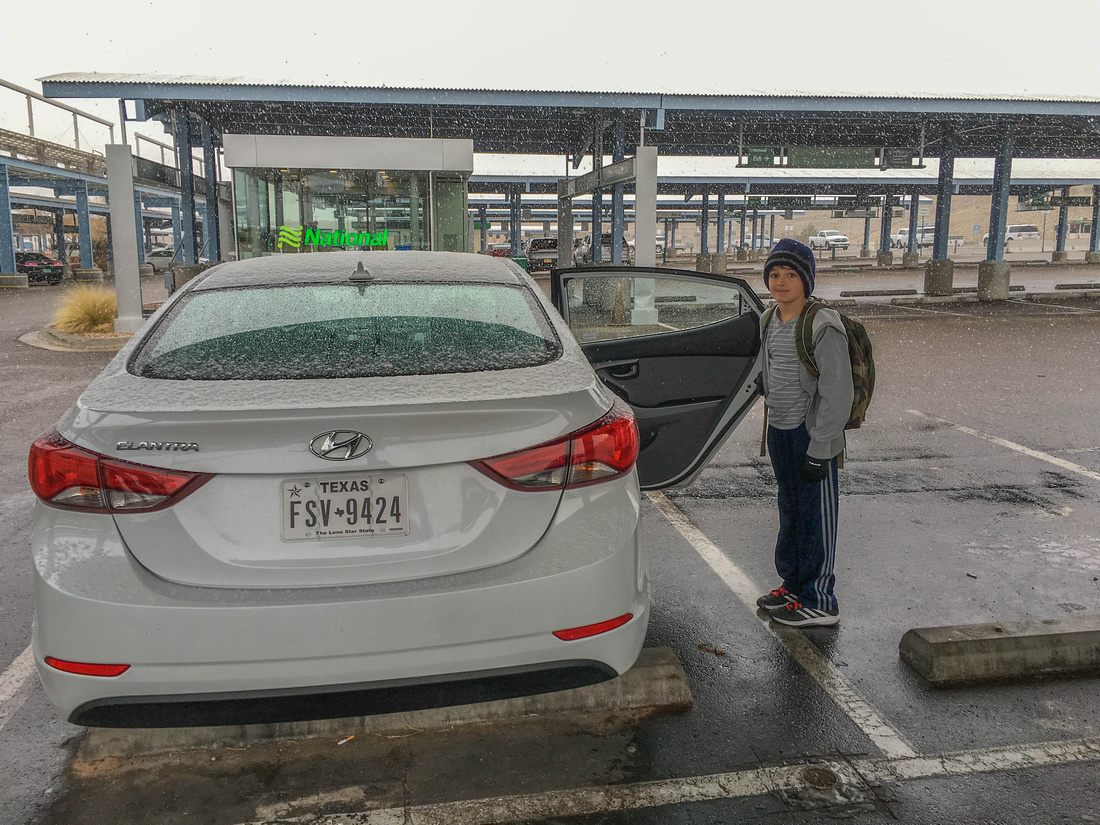 The snow was starting to fall in Albuquerque as we made our way south on I-25 towards Las Cruces.  The snow started to thicken as we made our way through Belen and Socorro.  That's when we got stuck behind two large trucks that were dumping dirt on the highway.  It took a full thirty minutes of driving at 25 - 35 mph before the trucks finally pulled over to let traffic pass. The highways start to get sketchy, and we have a long way to go

After an hour of white-knuckle driving in slippery conditions, we descended past Truth or Consequences and the roads started to clear up.  I felt vindicated in my decision to drive south and try to beat the storm.  Looks like it worked!

Wow, was I ever wrong.

Once we arrived in Las Cruces, we stopped off for a quick bite to eat at Panda Express (at Erik's request) near New Mexico State University.  We ordered our food to-go as it was getting dark and snow was beginning to fall again ... and now it was starting to thicken and stick to the roads.

We got on the highway, making our way East towards El Paso, and that's when things started to get intense.  The snow was so thick that traffic on I-10 was reduced to one lane.  Still, I felt like it was safe enough to continue.  I told Erik that he can recline his seat and get some sleep if he wants to.  He looked at me with a stunned look and said "these seats recline?".  I told him about the lever on the side of the seat and that most passenger seats in cars recline.  He was very excited about this discovery and he immediately put that knowledge to work as he reclined the seat and closed his eyes to get some sleep.  I put on some Pink Floyd to add to the ambiance of having thick flakes of snow melt on my windshield.

The weather continued to decline as we drove through the pass from Las Cruces to El Paso.  It was a bit scary at times, but our Hyundai was doing surprisingly well in the snow, so we pushed on.  Little did I know, this was child's play compared to what was to come.

Driving through West Texas became borderline terrifying.  I made it over one pass, only to find myself climbing another mountain pass.  I couldn’t see anything outside other than the two tracks in front of me, along with heavy blowing snow.  We made it down what seemed like very long descent, and somehow, things get even worse.

The following three hours were a blur, as if I was in a dream.  My view during this time was a variation of the photo below, although I never took a photo during the really bad parts because I was too focused on keeping our car on the road. 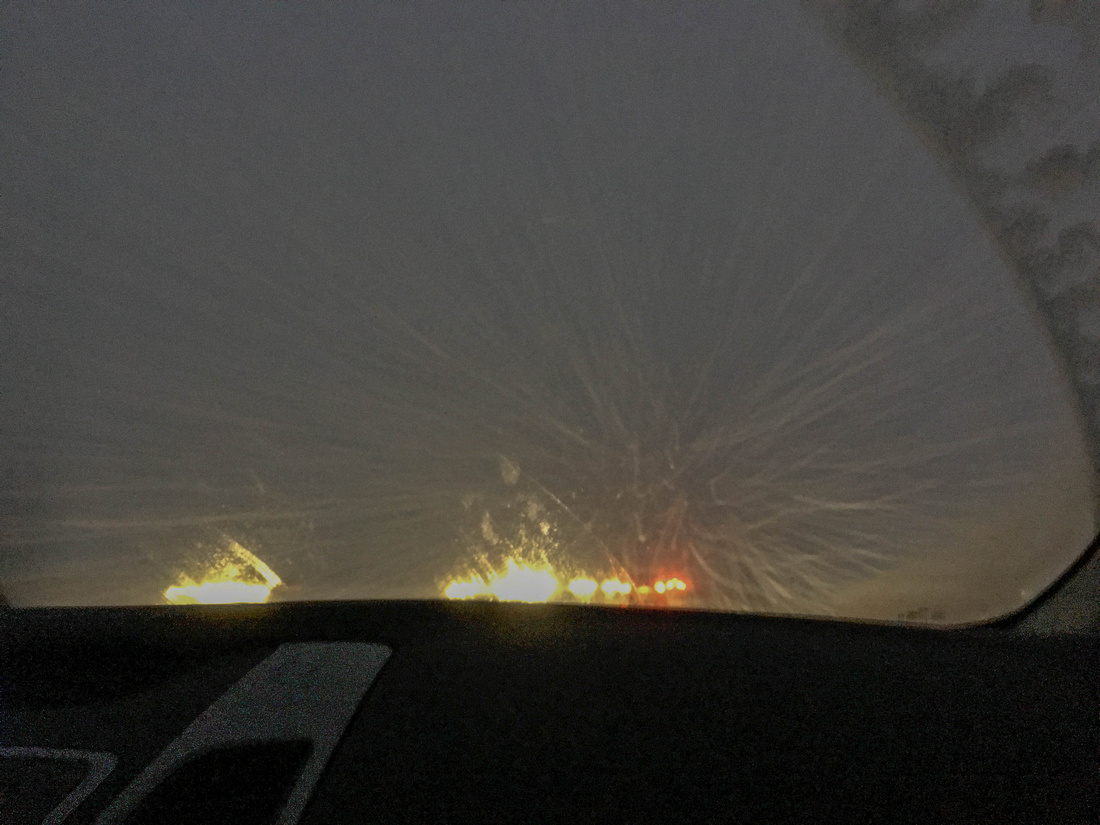 We climbed up yet another pass where the snow was very thick.  There were many accidents, with cars stuck in snow banks on the side of the road.  Given the chance, I would have definitely pulled over myself, but there were no buildings, exits, or safe spots on the shoulder of the road to pull into.  All I could do was peer through a small sliver of the front windshield that was not covered in ice and stare determinedly at the two faint lines ahead of me that were slightly darker than the rest of the road.  At this point, Metallica was on the play list in a desperate attempt to stay alert and focused.

Erik was sleeping peacefully through all of this, reclining comfortably in the passenger seat.

I finally got to what seemed like the summit of whatever mountain we were climbing and began what seemed like an endless 15 mph crawl down the backside of the mountain.  There were very few cars on the road and my Hyundai was often the one blazing fresh tracks through many inches of snow as we continued to descend.  It was hideous.

After what seemed like an eternity, the road started to get a tiny bit better and the snow was easing up a bit.  Phone reception was back and I started to look for the next town with available lodging that would have a low temperature above freezing so that I wouldn't wake up in snow.  Ft. Stockton and Ozona were both expecting snow in the morning so those weren't options.  After some additional research, Sonora, Texas become my target destination.  Sonora was expecting a low temperature of 35 degrees Fahrenheit.  I looked up hotels in Sonora, found a Comfort Inn, and was able to book the last available room.  It only had one king-sized bed, but at that point I didn't care if we had to sleep in a bathtub or on the floor.  I was exhausted.

I continued to blast my music in a semi-possessed state as the conditions gradually eased from snow to freezing rain to a regular, moderate rain.  I could finally go the speed limit (70 mph) for the first time in ages.  Finally, at 2:23am local time (13 hours after my departure from my house), we arrived at the Comfort Inn in Sonora, Texas.  What a relief.  I was so happy to see the hotel and I was completely amazed that our Hyundai Elantra was able to drive through that blizzard.

We stumbled into the hotel, checked in, got our key, and dragged ourselves to our room.  No tooth-brushing, no nothing.  It was straight to bed and we were out like a light.

Keywords: How to visit 15 countries in 20 days, How to visit 15 countries in 20 days with a 10-year-old and enjoy it, Mark Aspelin, Mark's Travel Blog, MarksTravelBlog.com, New Mexico & Beyond, New Mexico and Beyond, nmbeyond.com, Travelers Century Club, Travelers' Century Club, Traveling through Europe with a child, Traveling to Europe with a Child
« Previous Post Next Post »