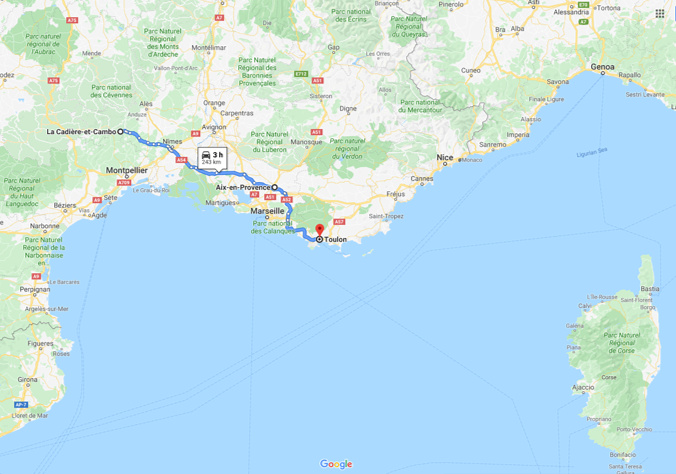 Last night we made the drive from La Cadiere et Cambo to Aix-en-Provence and checked into our hotel - a fancy 5-star hotel called Le Pigonnet.  We stumbled to our rooms, checking out some interesting animal pictures on the walls along the way. 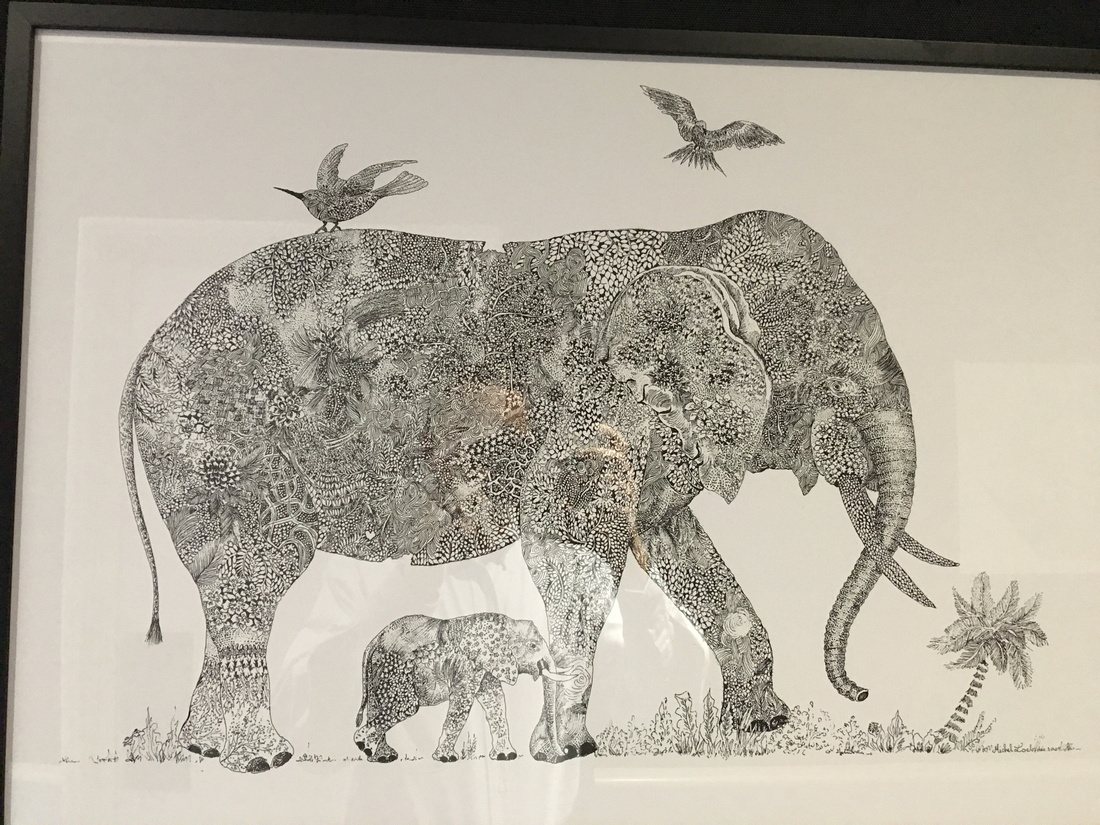 We were very excited to get to a comfy bed as it had certainly been a full day.  The subtle wallpaper (made of fabric) matched the drapes and screamed "this is going to be expensive".  I don't stay in fancy 5-star hotels very often, but I got a good deal on this hotel since it was off-season. 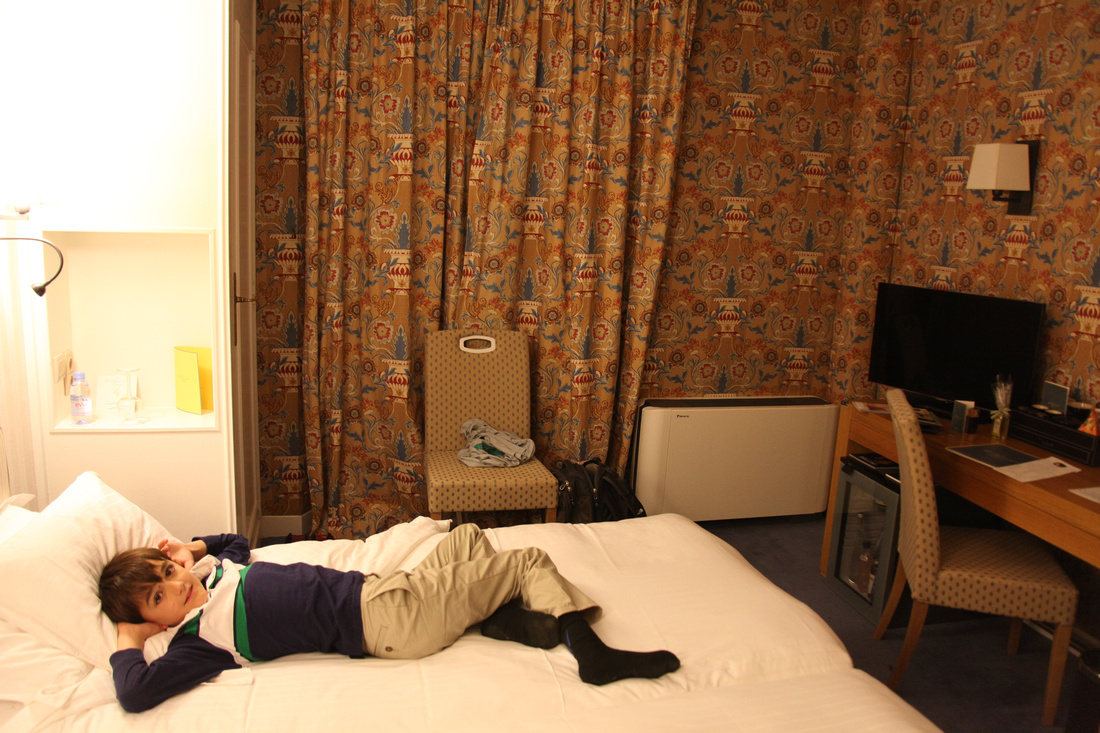 Believe it or not, we finally had a chance to sleep in for change ... until 8:45am ... and it felt decadent.  We made our way to breakfast and it turned out to be excellent.  Even Erik was impressed, and that's saying something. 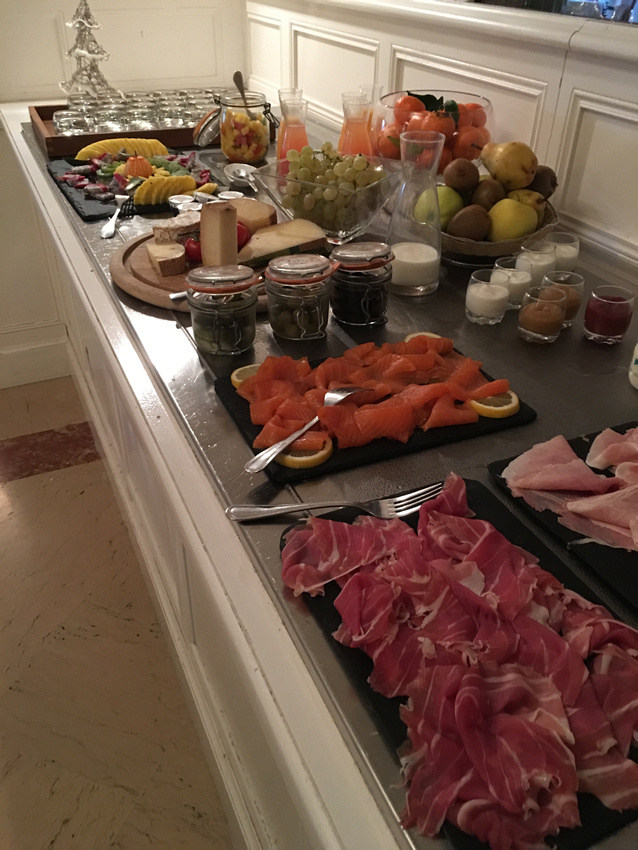 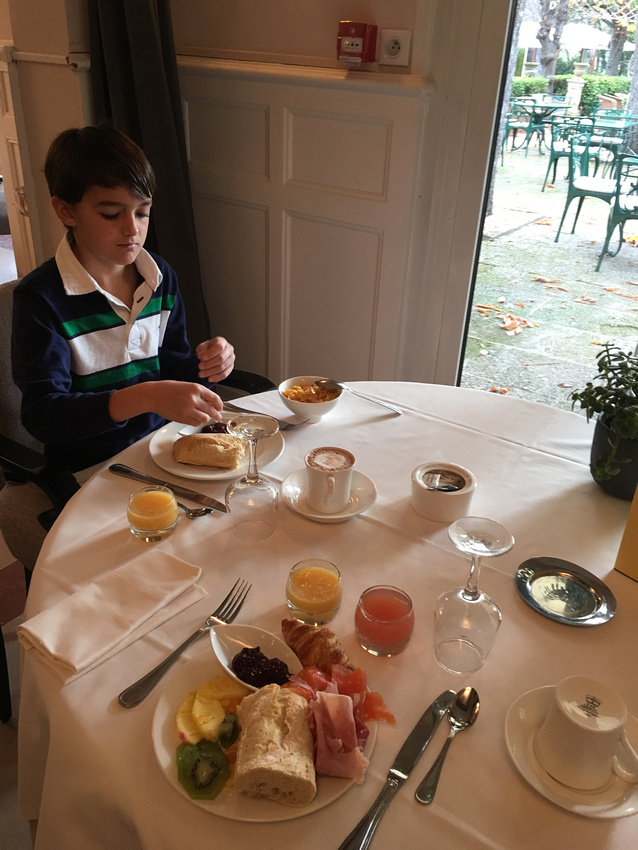 Our clothes were pretty ripe at this point, so I decided to drop a bag of laundry at the front desk at 9:30am and they said that it would be ready in about 3 hours ... I thought - wow that is great!  What I didn't ask was the all-important "how much will that cost? question" - a rookie move that ended up costing me dearly.  More on that in a minute.

Erik and I walked into town to explore the city center of Aix-en-Provence, a well-known university town of ~150,000 people.  We walked non-stop for about two hours as we explored the city and took photos ... much to my son's dismay since he knows that means he will be in them. 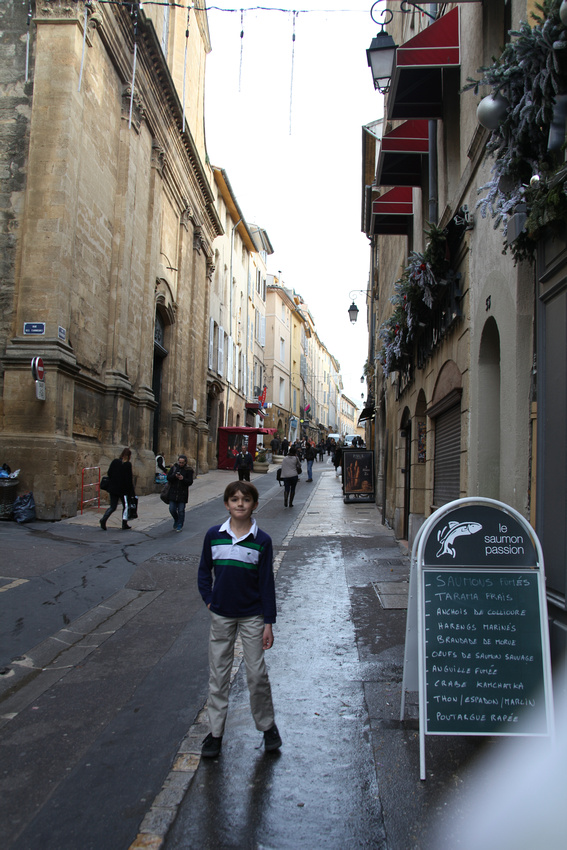 It felt good to stretch our legs, but after quite a few miles of exploring on foot, we were ready to eat.  We spotted a Japanese restaurant, which sounded good to us, despite the fact that we were in France.  We both ordered a Teriyaki chicken bento box ... deciding to play it safe since we would be spending the night on a boat.  We also spotted a sign for tempura ice cream.  Erik had never heard of tempura ice cream but was interested in giving it a shot.  It turned out to be a good call, as it was very tasty. 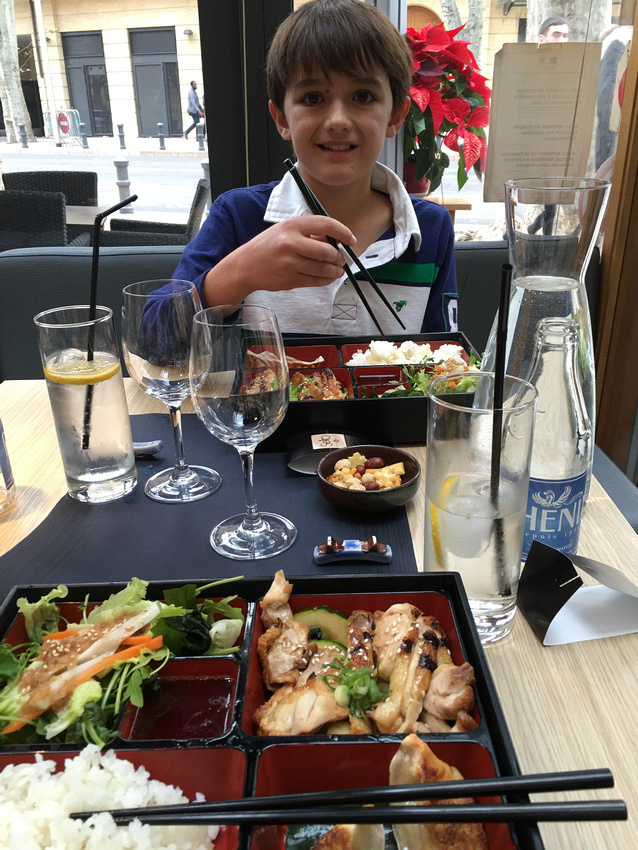 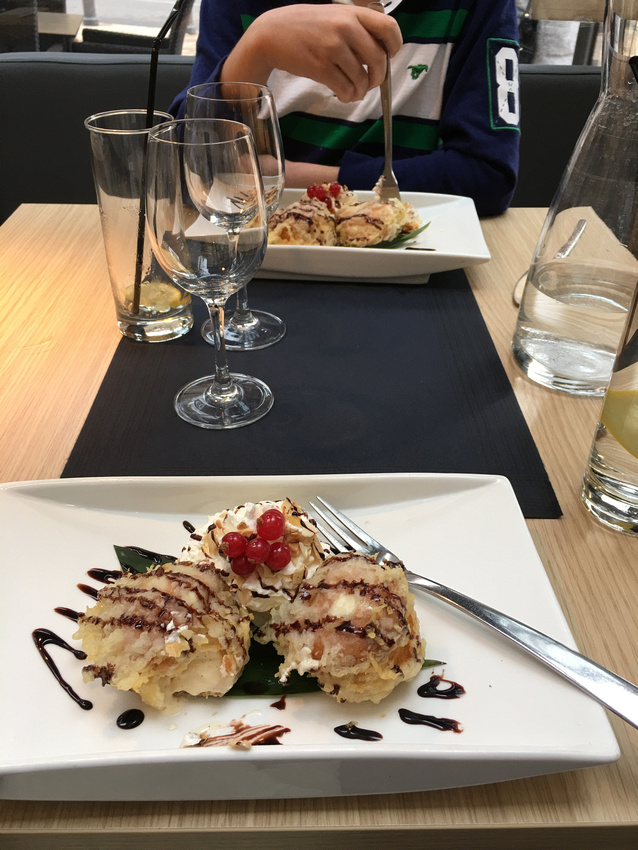 After lunch, we made our way back to the hotel since it was time to check out.  Our laundry wasn't ready yet, so we checked out of our room and spent the next 90 minutes wandering around the beautiful grounds of the hotel (not your ordinary hotel garden) and doing a short workout at the hotel gym.  Erik enjoyed checking out some of the fancy cars parked at the hotel. 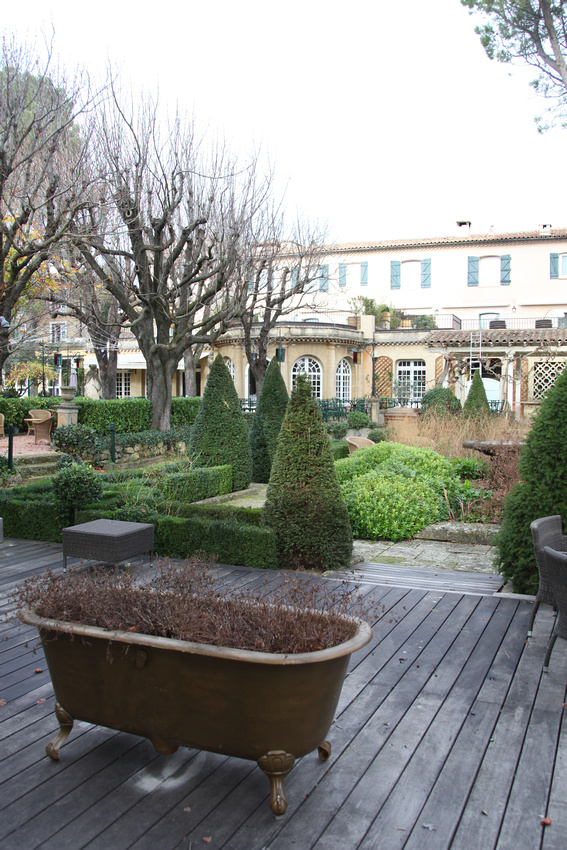 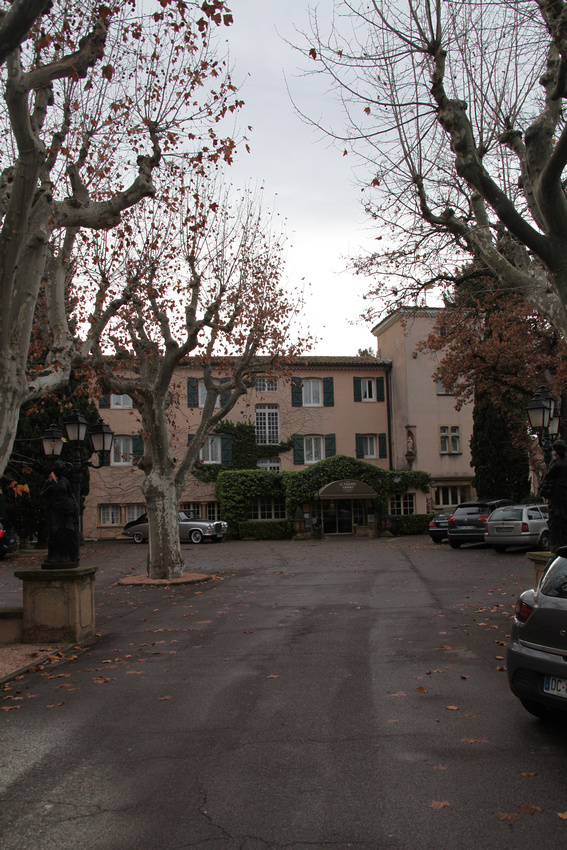 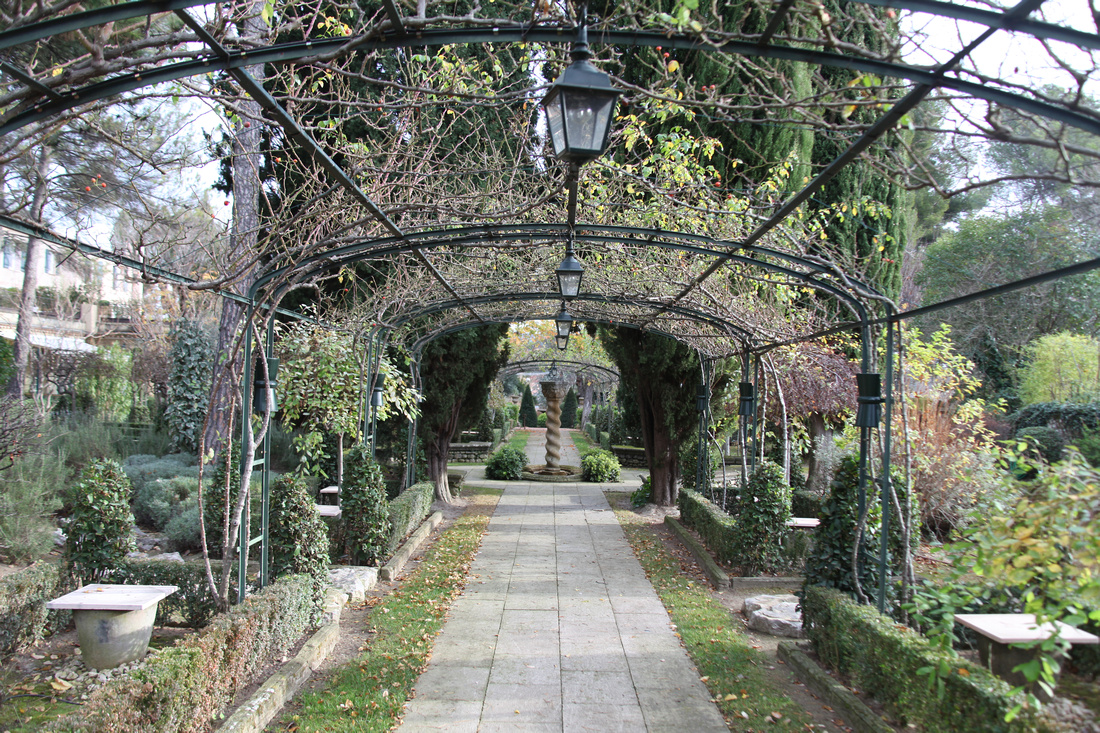 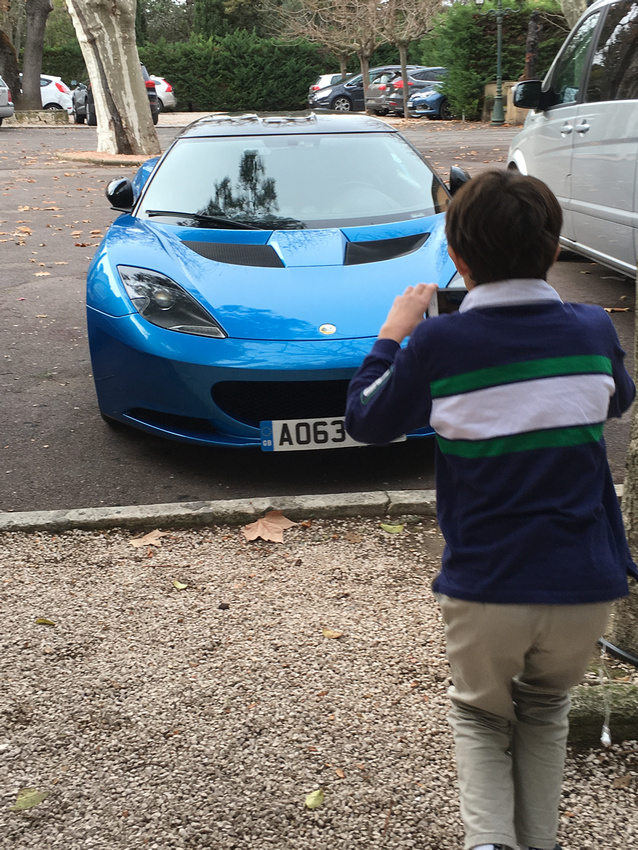 We walked back to the lobby and learned that our laundry was ready ... for the low cost of $165.  Yes, you read that correctly.  Robbery.  I couldn't believe it.  I was tempted to tell them that the clothes we washed were probably not even worth $165 so the idea of cleaning them at that price was insane.  Keep in mind that we only gave them one laundry bag ... we travel light and all of our luggage is carry-on.  They must have been charging us $5 per sock.  It was frustrating, but that's what I get for not asking for the price up front.  Yes, I am an idiot.

Well, it was time to hit the road.  It was only an hour drive to our destination - Toulon, where we were going to catch an overnight ferry to Corsica.  We found the parking lot for Corsica Ferries.  I asked if we could bring our car on the boat but the answer was a firm "non".  The boat was already full.  Bummer.

We had a few hours to kill, so we walked around the city center of Toulon near the port and had dinner at a restaurant called Padre Mio, as Erik was craving pasta ... again.  He opted for spaghetti bolognaise with an Orangina and I had penne arribiata with a bottle of water.  Livin' on the edge. 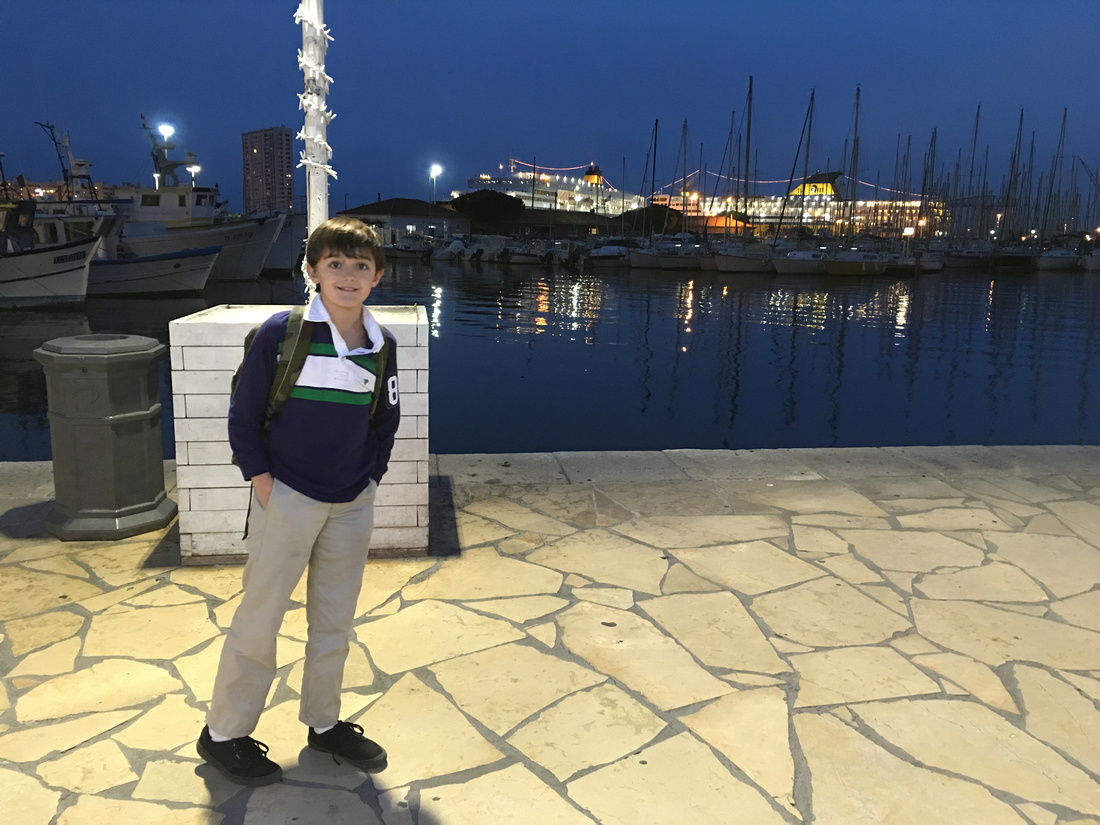 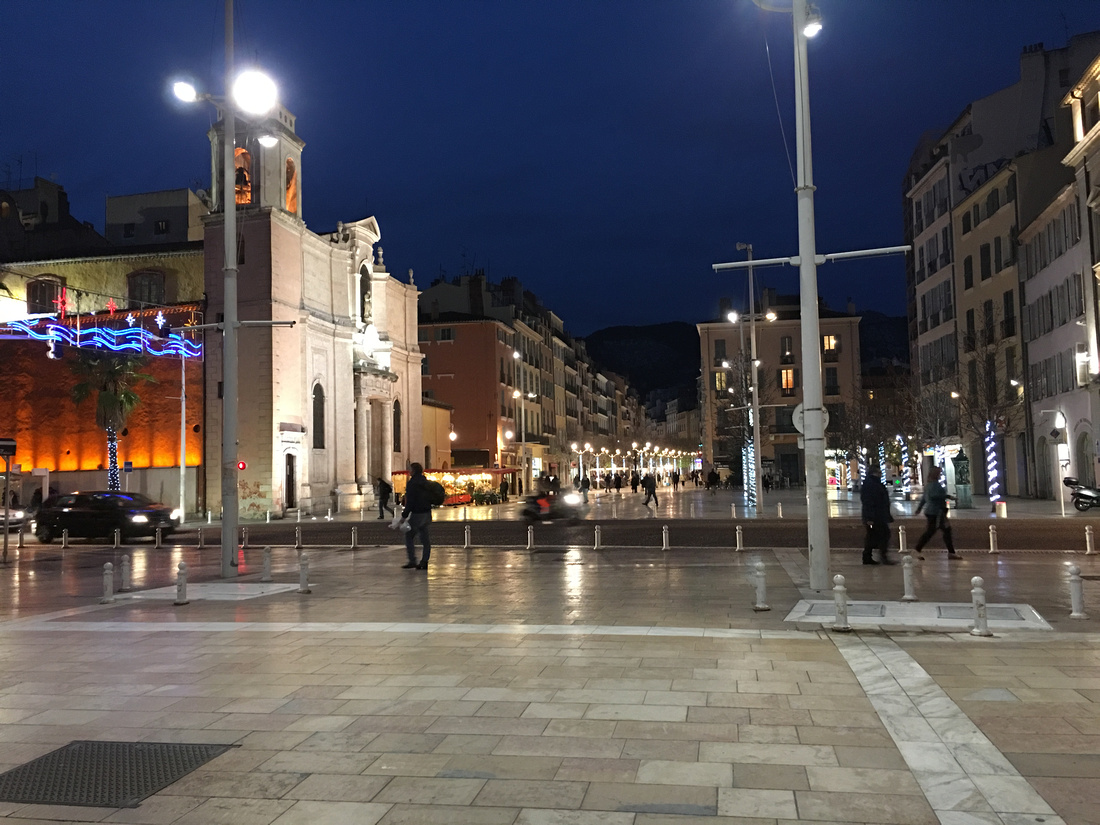 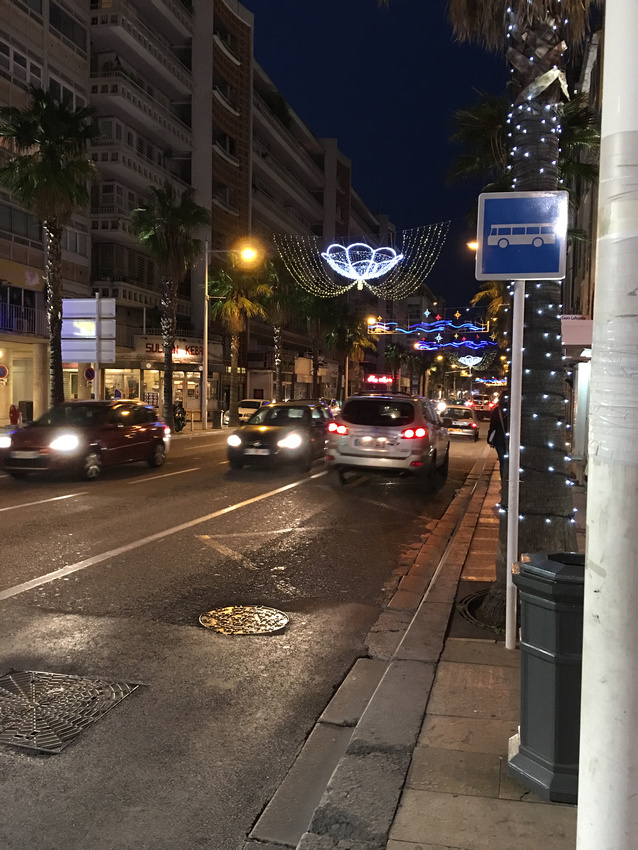 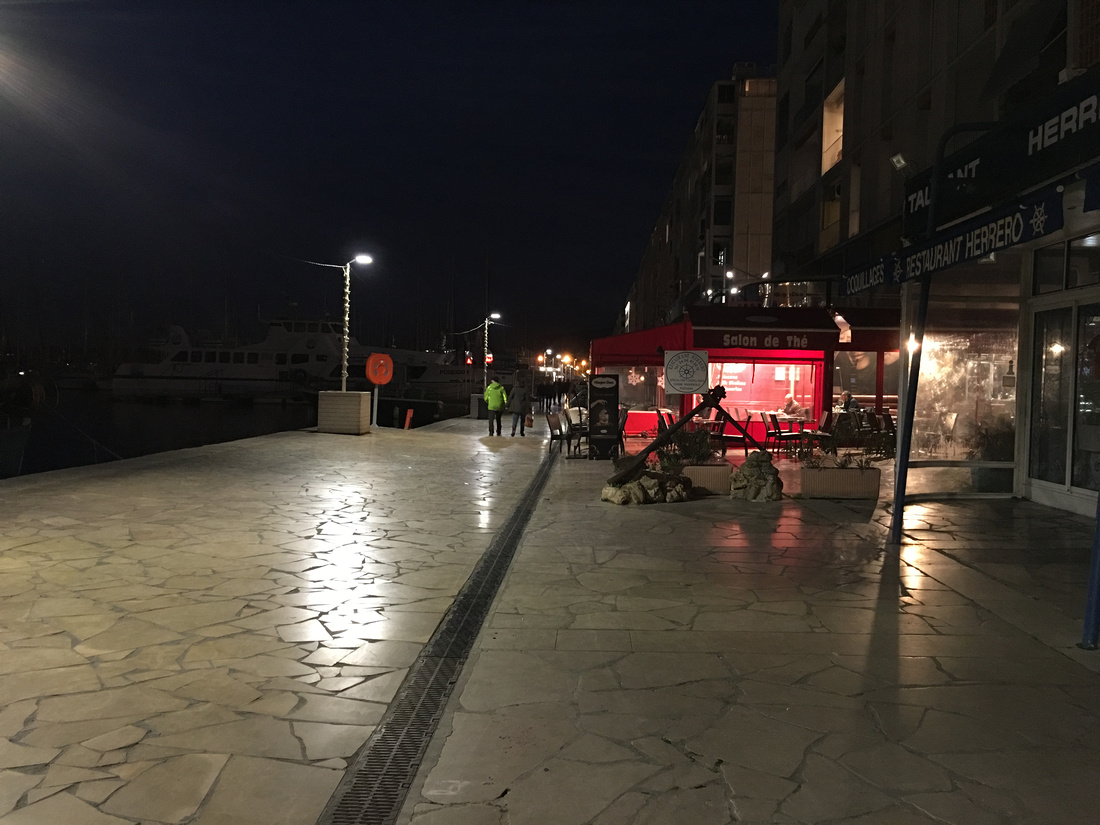 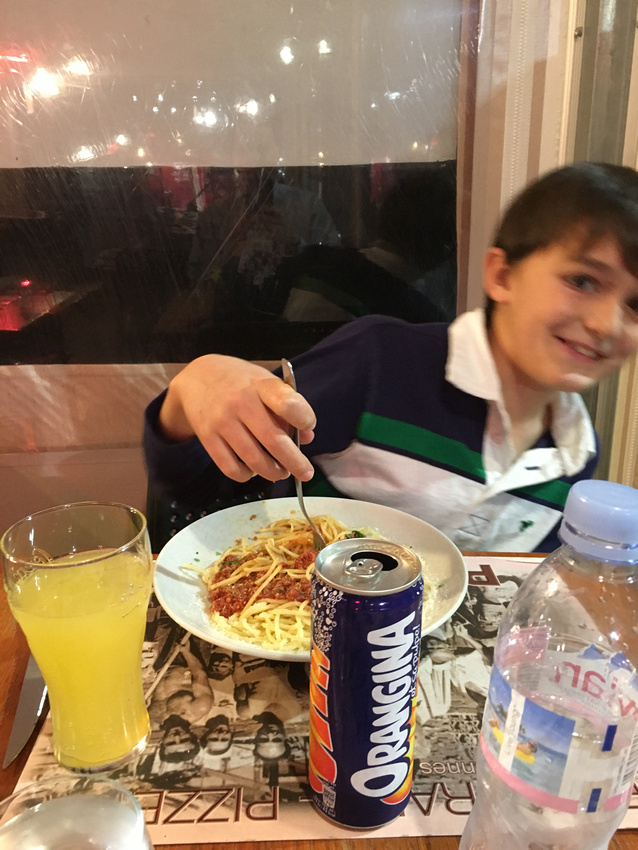 After dinner, we meandered back to the boarding area for Corsica Ferries and eventually received the green light to board the boat.  The boat was nothing special and we were very grateful to have our own cabin.  We had a bunk bed in our cabin, which Erik thought was cool.  Of course, he chose the top bunk.  We also had a window, so that was a bonus.  Granted, we couldn't open the window, but at least we could see outside. 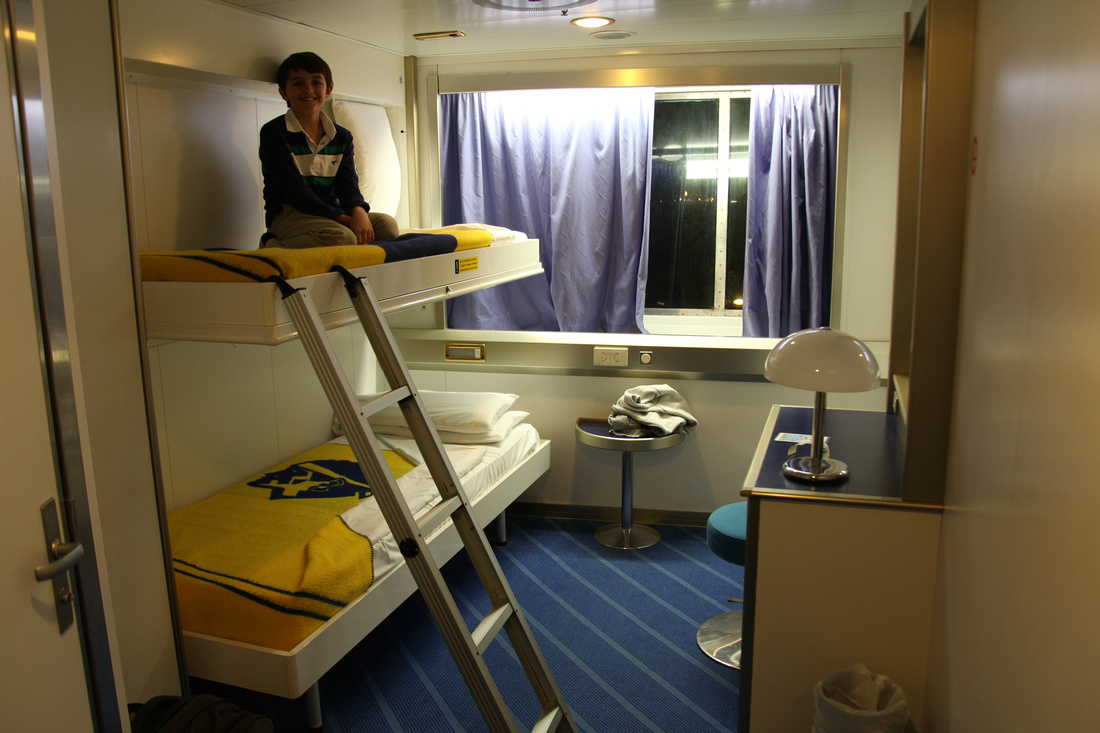 Now we had an important decision to make for tomorrow when we arrive in Corsica.  Should we rent a car and explore Corsica or should we just go to a hotel with a spa to relax.  It was a tough call, so we decided to flip a coin.  Spa it was.  We were both happy with that option as the idea of a day without driving sounded great.

I did some research online and found a place in the outskirts of Bastia that had availability and looked like a good candidate ... the Hotel Ostella, a 3-star hotel with a pool and fitness room.  The cost was significantly less than my laundry bill earlier today.  I booked it and then we went to bed around 10pm.  We could definitely feel the waves, but it wasn't bad.  Erik slept soundly ... better than I did.

Keywords: Aix-en-Provence, Corsica Ferries, Corsica Ferry, how to visit 15 countries in 20 days, how to visit 15 countries in 20 days with a 10-year-old and enjoy it, Le Pigonnet, Mark Aspelin, Mark's Travel Blog, MarksTravelBlog.com, Toulon, travelers century club, travelers' century club, traveling through europe with a child, traveling to europe with a child
« Previous Post Next Post »