It was New Year's Day and my son and I were up early ... early enough to catch people in the elevator who were still on a roll from partying all night.  With high octane fuel in their blood, they smiled, shook our hands, and heartily wished us a Happy New Year.

The elevator deposited our contrasting group of sober and hammered individuals into the lobby and Erik and I made our way to the hotel restaurant to grab a quick breakfast before hitting the road.  Wrong again.  The restaurant was closed ... everything was closed.  So we went back upstairs to get our things and check out at 7am.  We had a plane to catch in Barcelona.

The streets of Andorra la Vella were deserted so it was a relaxing drive out of town.  After a few minutes, we passed through a DUI checkpoint and then descended down, down, down through some beautiful scenery.  Everything along the way appeared to be closed until we reached the outskirts of Barcelona.

Three hours later after leaving our hotel in Andorra, we arrived at the Barcelona airport ... thanks to GPS.  It saved us as usual.  We weren’t sure where to park and we ended up in short term parking, hoping we wouldn’t regret that later when we received the bill.

Although I had purchased our airline tickets through Iberia, it turned out that we would be flying on Vueling Airlines, which I had never heard of before.  There were no issues getting through security and catching our flight.  Once aboard, Erik busted out his iPhone so that we could play a game called "Soccer Physics" which kept us entertained during the short 20-minute flight to Mallorca, the largest of Spain's Balearic Islands.

As we exited the Palma de Mallorca airport, we grabbed a taxi to our hotel.  The capital city of Palma was bigger than I expected, with more than 400,000 residents.  During our drive we had a nice view of the The Royal Palace of La Almudaina. 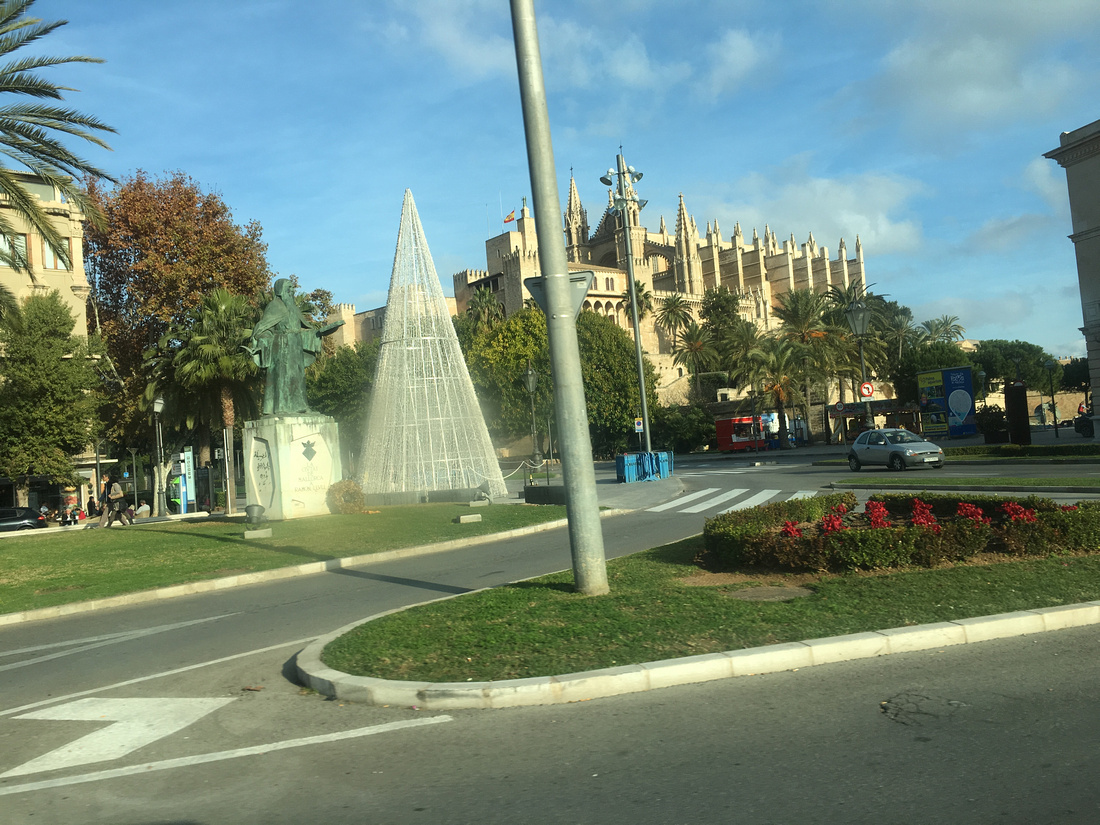 Eventually, we were deposited at the front entrance of Hotel Isla de Mallorca ... "an Urban Hotel and Spa." 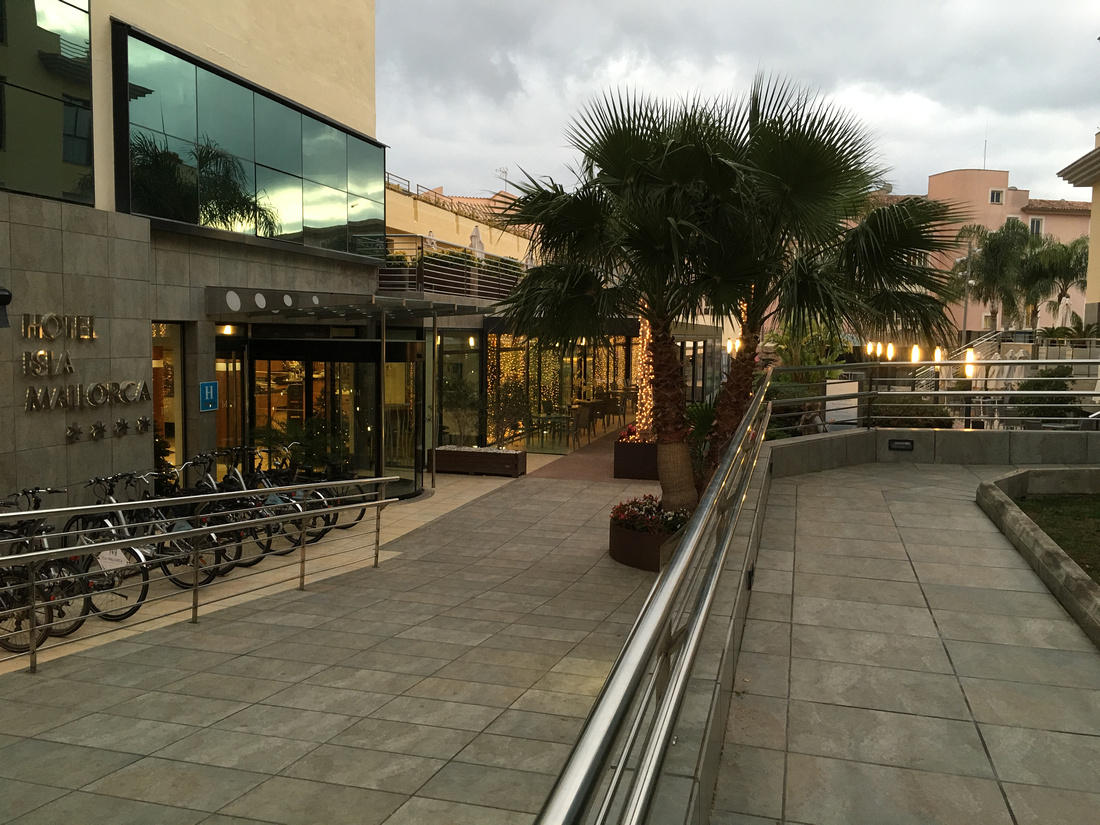 It was a decent hotel, but our nonsmoking room had a strong smell of smoke ... like some very recent New Year's Eve celebrations that involved smoking cigarettes or cigars in our room.  I rarely complain about anything, but the smell was strong enough that I was inspired to call the front desk to see if we could change rooms.  We couldn't.  Instead, they asked a member of the cleaning staff to stop by to attempt to improve the smell.  It didn't help at all, so I opened the windows as wide as I could and we left the room, hoping it would be better after a few hours of fresh air. 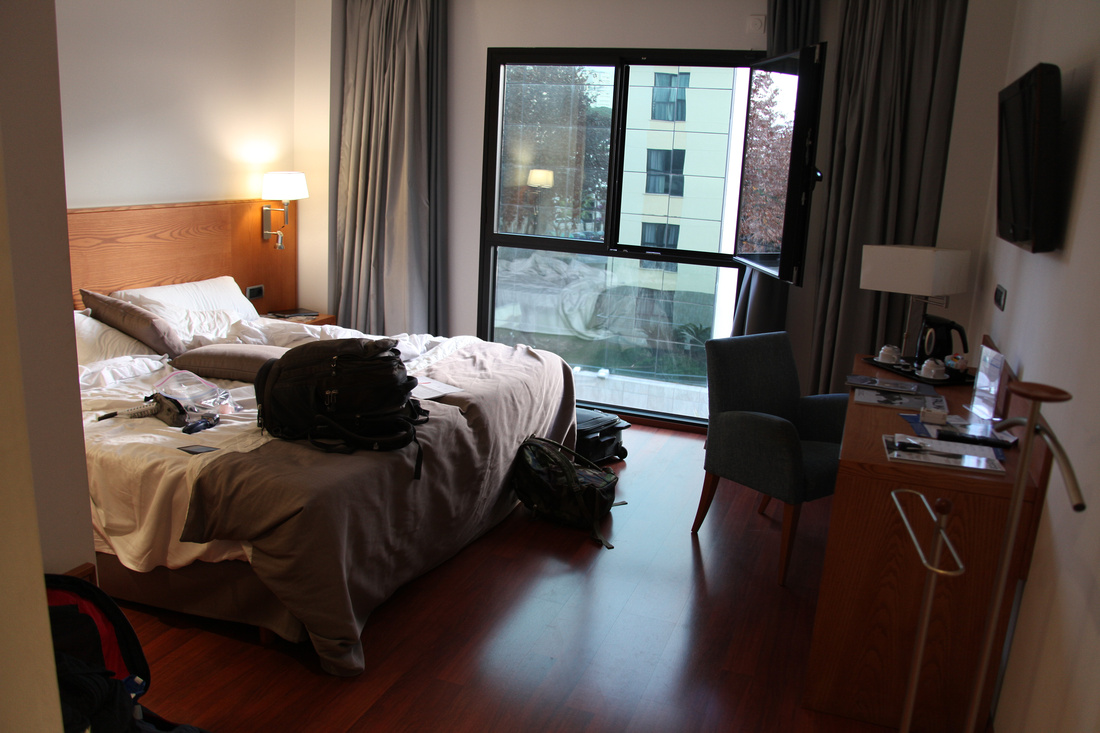 We went to the hotel gym for a strength training workout ... which felt great.  After the gym, we walked into town to explore the city.  After an hour or two of walking along the streets, we found ourselves getting hungry at the ridiculously early (by local standards) hour of 5pm.  Of course, most places don't open for dinner until 8pm.

Around 6pm we came across a pizza place on the main street next to the ocean.  Erik had Pizza Margherita and I had Pizza Salami (it supposed to be spicy but it didn’t taste spicy to me ... granted I'm used to very spicy food).  The food was decent and we enjoyed some quality people watching from our outdoor table.  Lots of dog walkers, a few people whizzing by on Segway-types of transport, and one older guy who was singing opera-style at the top of his lungs as he passed the restaurant on what appeared to be his daily evening walk. 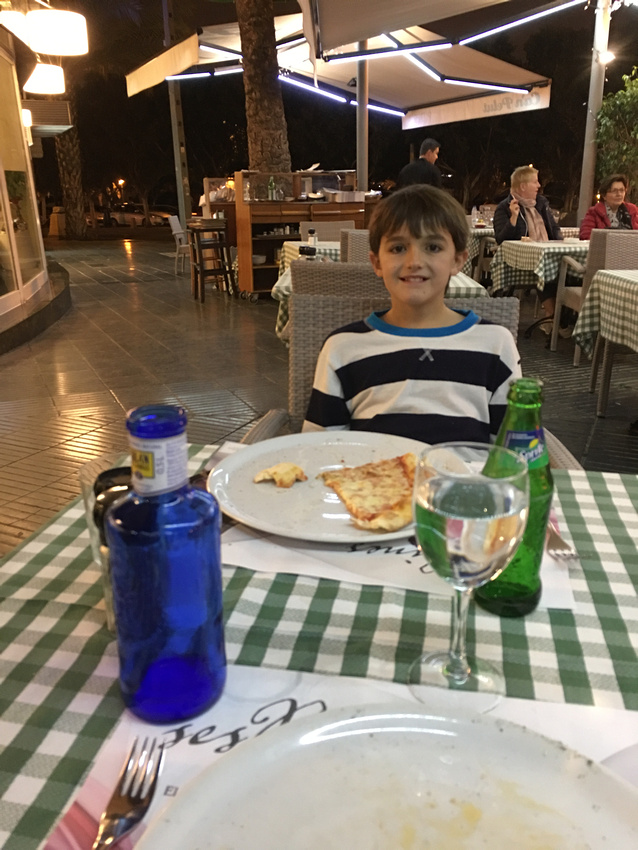 After dinner, we walked along the waterfront and explored more city streets as we gradually made our way back to the hotel, ready to call it a night. 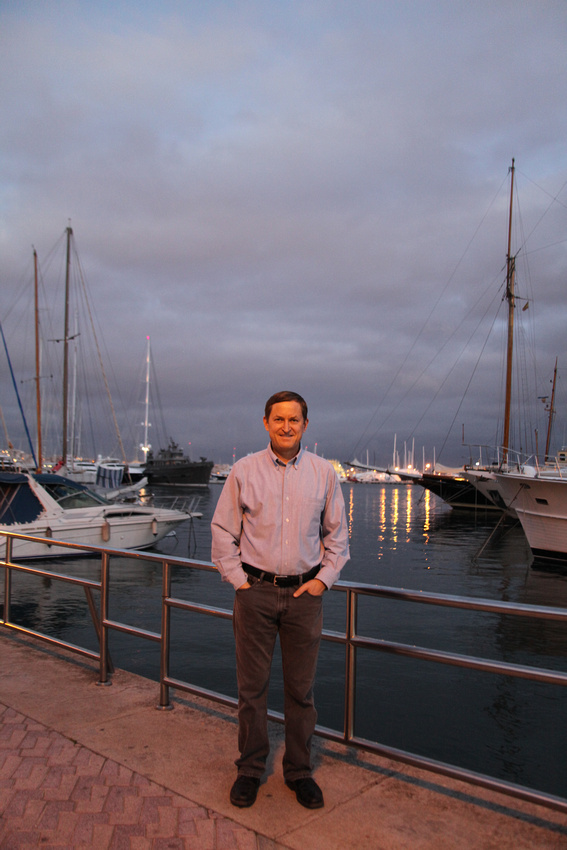 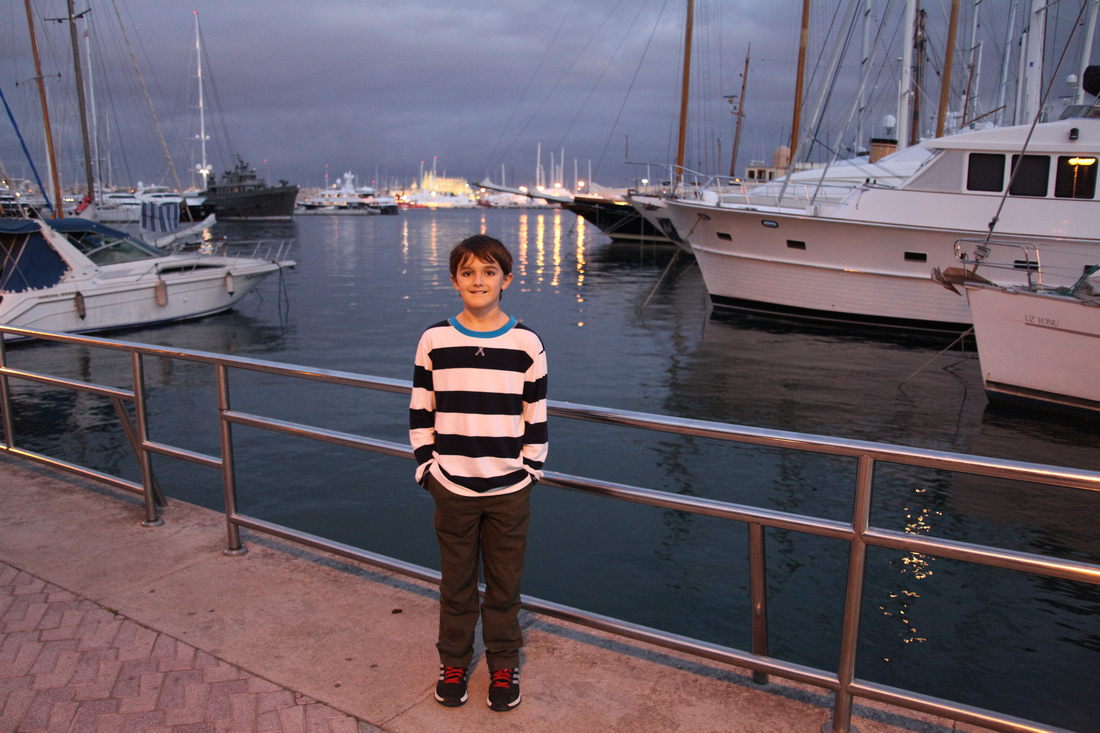 I'm embarrassed to say that tomorrow we're already leaving Mallorca to make our way back to France, recognizing that we didn't even scratch the surface of experiencing Mallorca.  That's one of the obvious drawbacks of "checklist travel" ... you only get a snapshot of life in the places you pass through.  But, we're still enjoying our trip so far.

If everything goes as planned, tomorrow night we'll be sleeping in Argelès-sur-Mer on France's Mediterranean coast.

Keywords: andorra, andorra la vella, how to visit 15 countries in 20 days, how to visit 15 countries in 20 days with a 10-year-old and enjoy it, Mallorca, Mark Aspelin, Mark's Travel Blog, MarksTravelBlog.com, new year's eve in andorra, Palma de Mallorca, travelers century club, travelers' century club, traveling through europe with a child, traveling to europe with a child
« Previous Post Next Post »