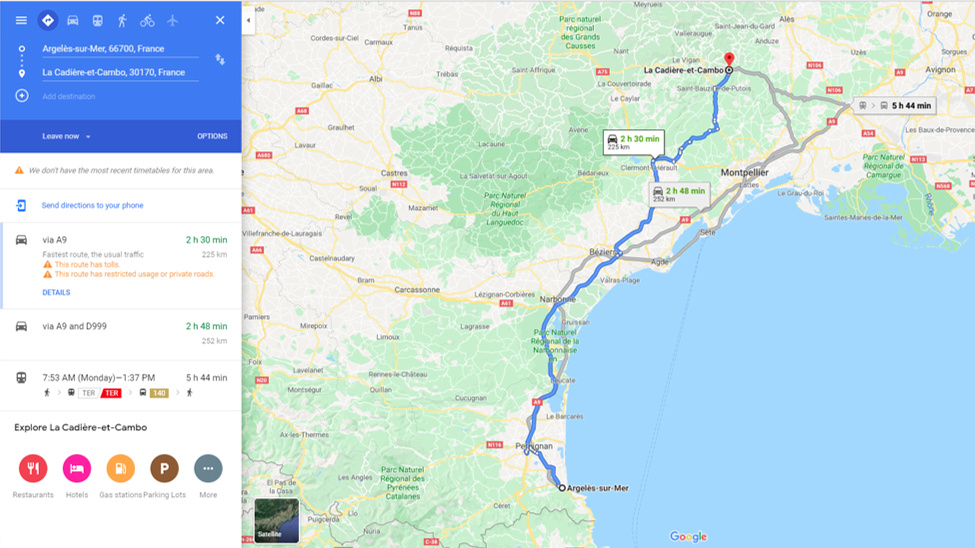 We woke up early at the L'Hostalet bed and breakfast in Argelès-sur-Mer and had breakfast before the other guests arrived.  Erik had fun hanging out with the resident cat who was enjoying a relaxing morning by the fire. 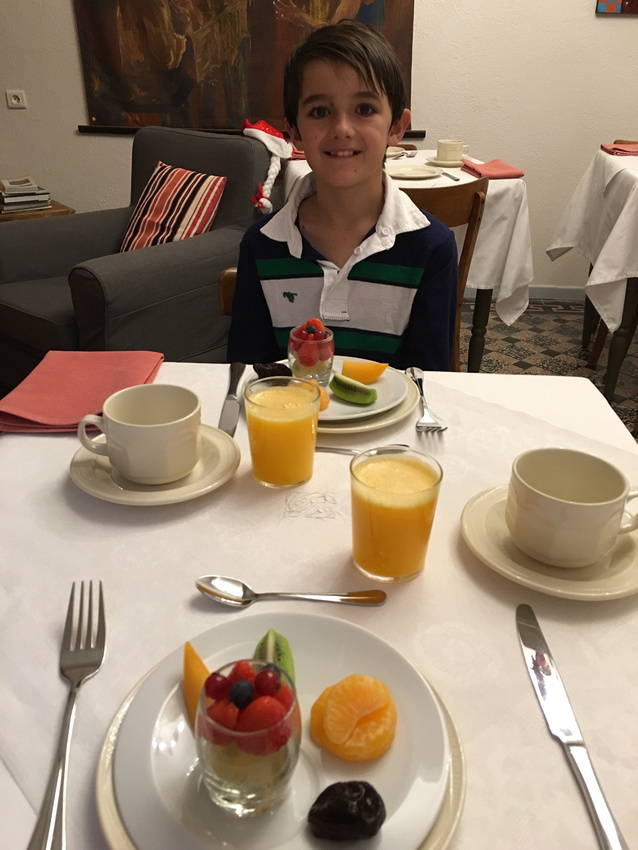 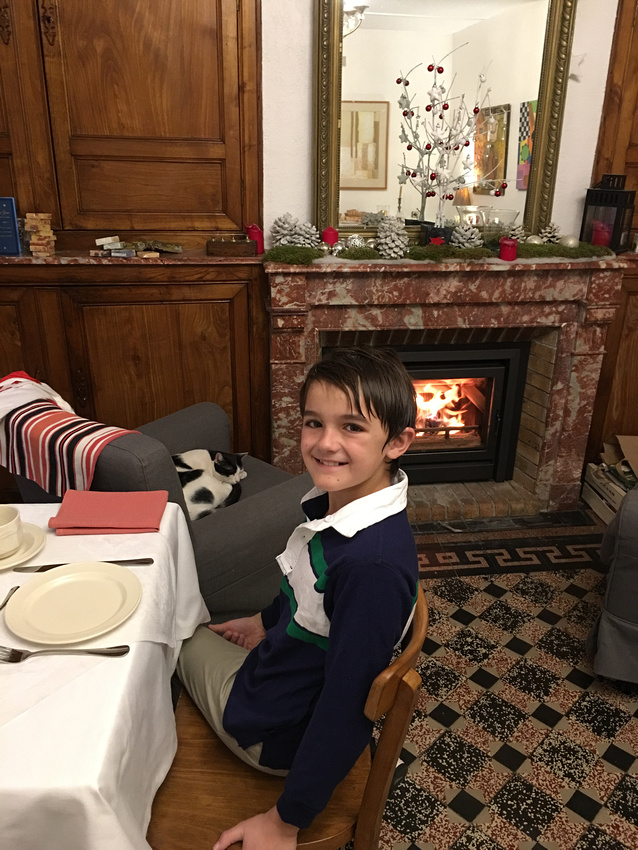 We checked out around 9am and the host was nice enough to put our luggage in a cool luggage cart on his bike and join us for the walk to our car which was parked down the road.  We talked along the way and he said that his parents used to have an Inn so he eventually decided to do the same and he enjoys it. 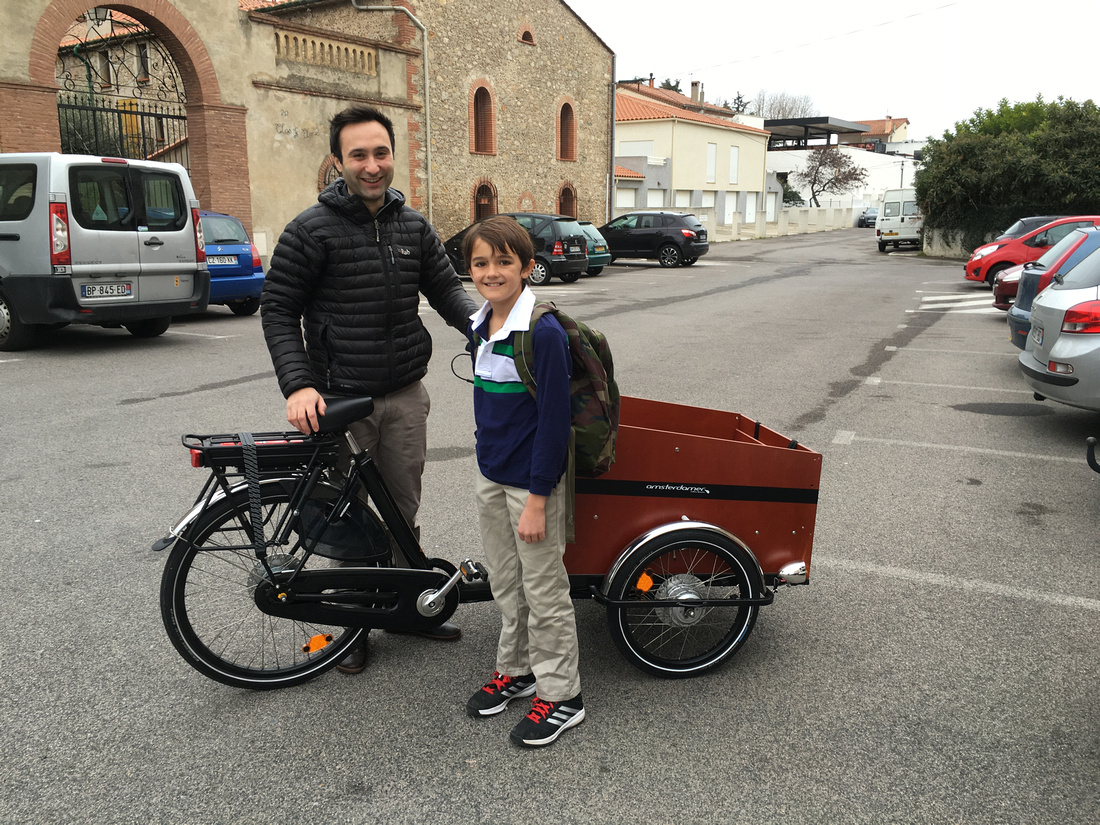 After saying our goodbyes, Erik and I hopped in our car and began the 2.5 hour drive to the small town of La Cadière-et-Cambo, where we would meet Elsa, an old friend of mine from the days when we worked at The Coca-Cola Company in Atlanta.  I hadn't seen her in nearly fifteen years and I was looking forward to catching up with her.  Erik and I didn't realize it, but we were in for a special treat with her family.

We made good time to the place where we would meet - in front of the church in La Cadière-et-Cambo.  Given that the town has a population around 200 people, it wasn't very hard to locate.  Erik burned some energy by running around the town and then pretending that the ledge around the church was on Mt. Everest as he tried to keep his balance.  We are easily entertained. 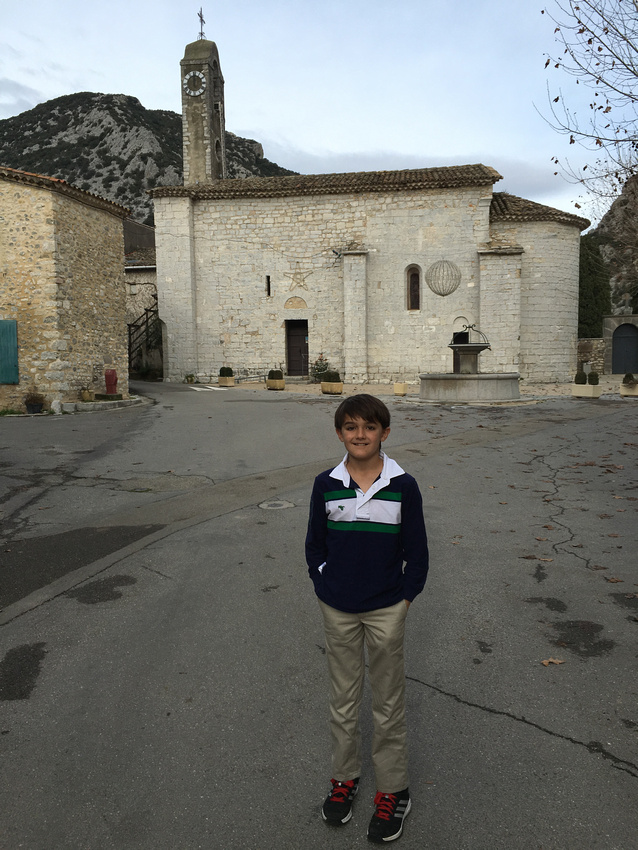 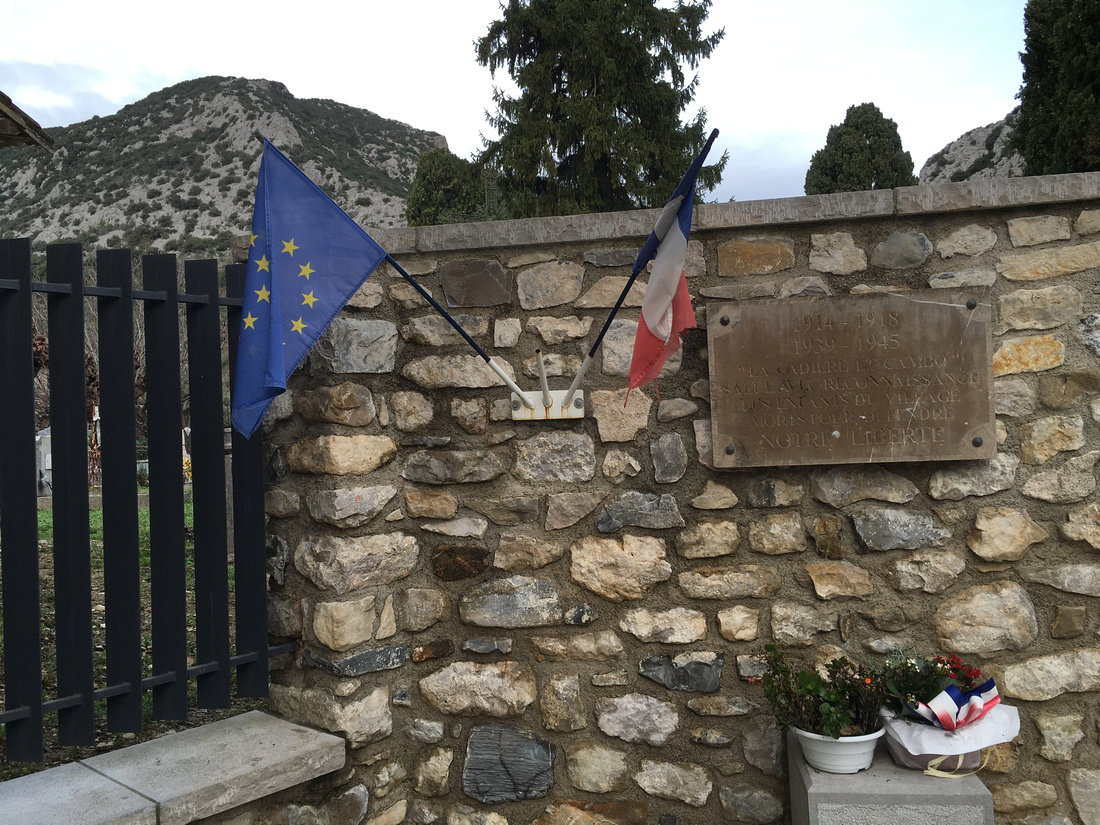 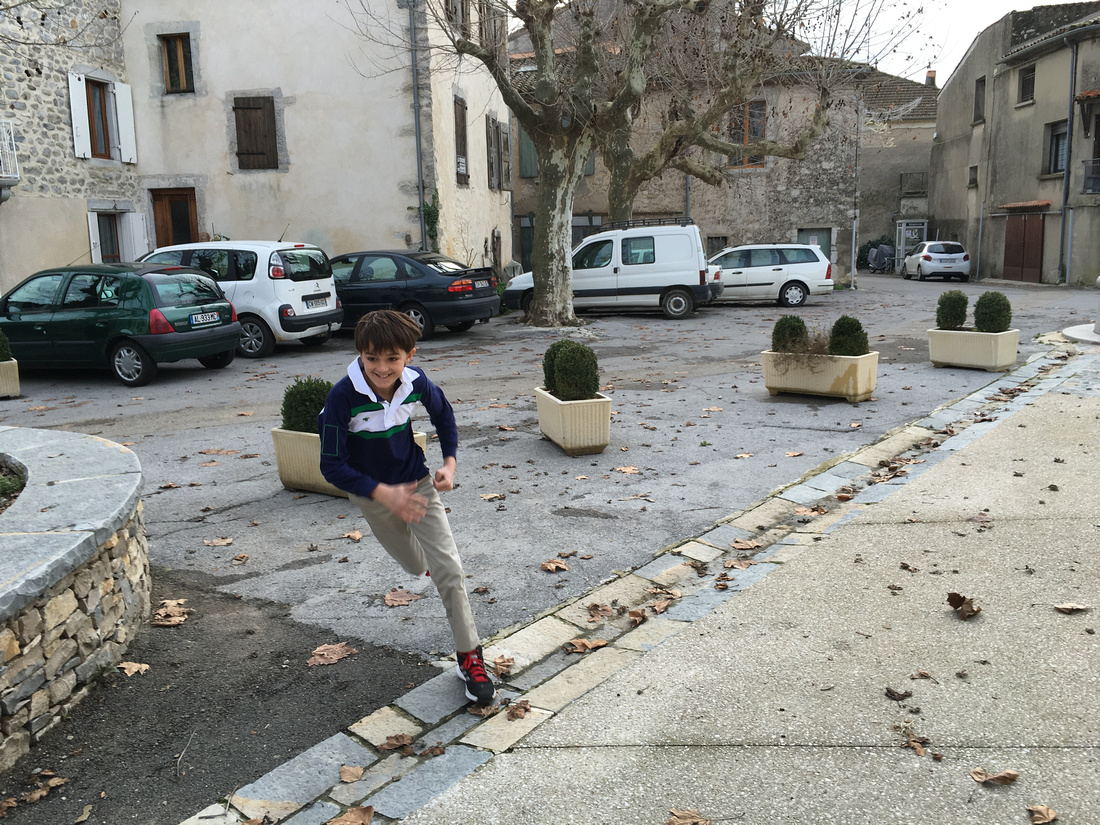 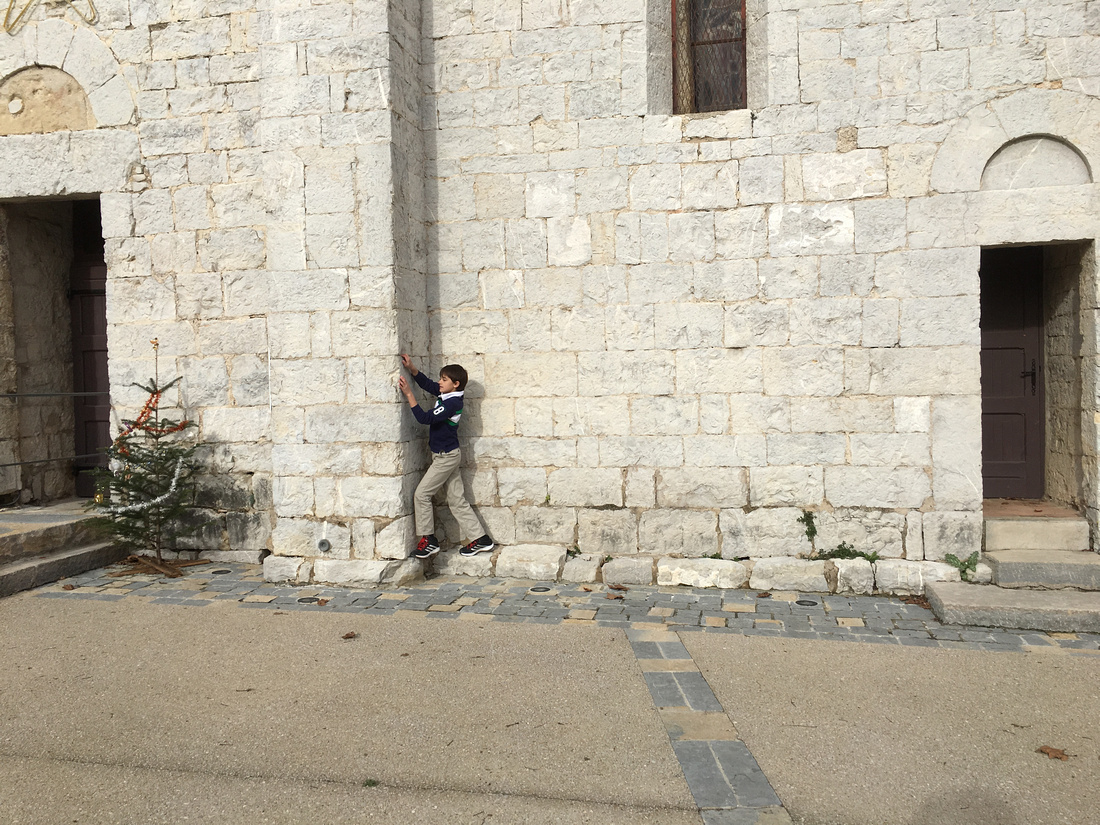 Elsa arrived right on time and we then followed her car on the short drive to her parents' house.  It was a nice house in a beautiful setting, with an olive tree orchard and great views of the surrounding mountains where a rare species of eagle nests.  The house was built of stone and her dad built most of it himself, gradually adding more rooms, a playhouse, and greenhouse to the original one room house.

We entered the house and met Elsa's parents and her sister's family which included 4 girls who had never met an American boy before.  The girls were a bit anxious and Erik was too, so he immediately gravitated towards the family pets. 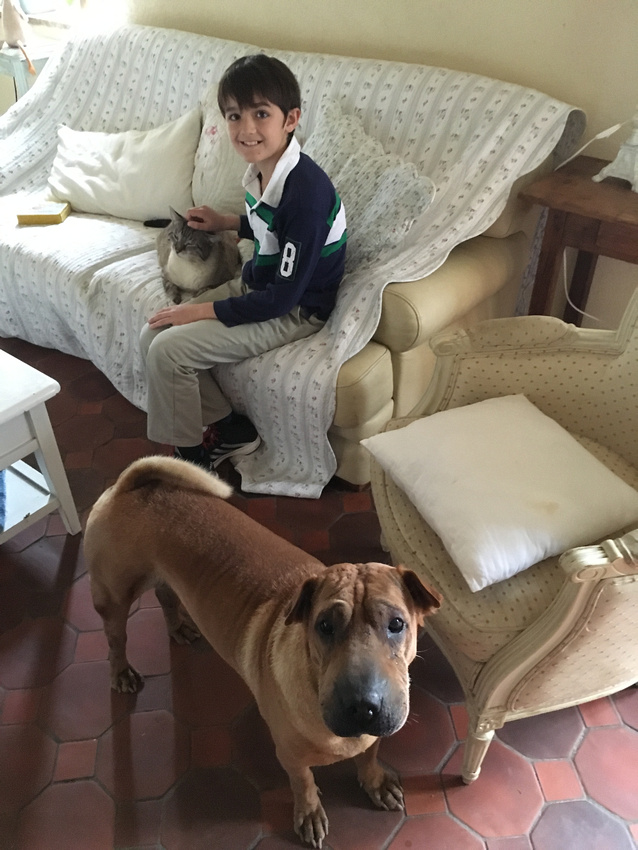 The girls didn't speak much English and Erik doesn't speak any French, but it didn't matter.  After breaking the ice with a game of cards, the kids ended up having a great time playing together outside on the swings, playing badminton, and drawing. 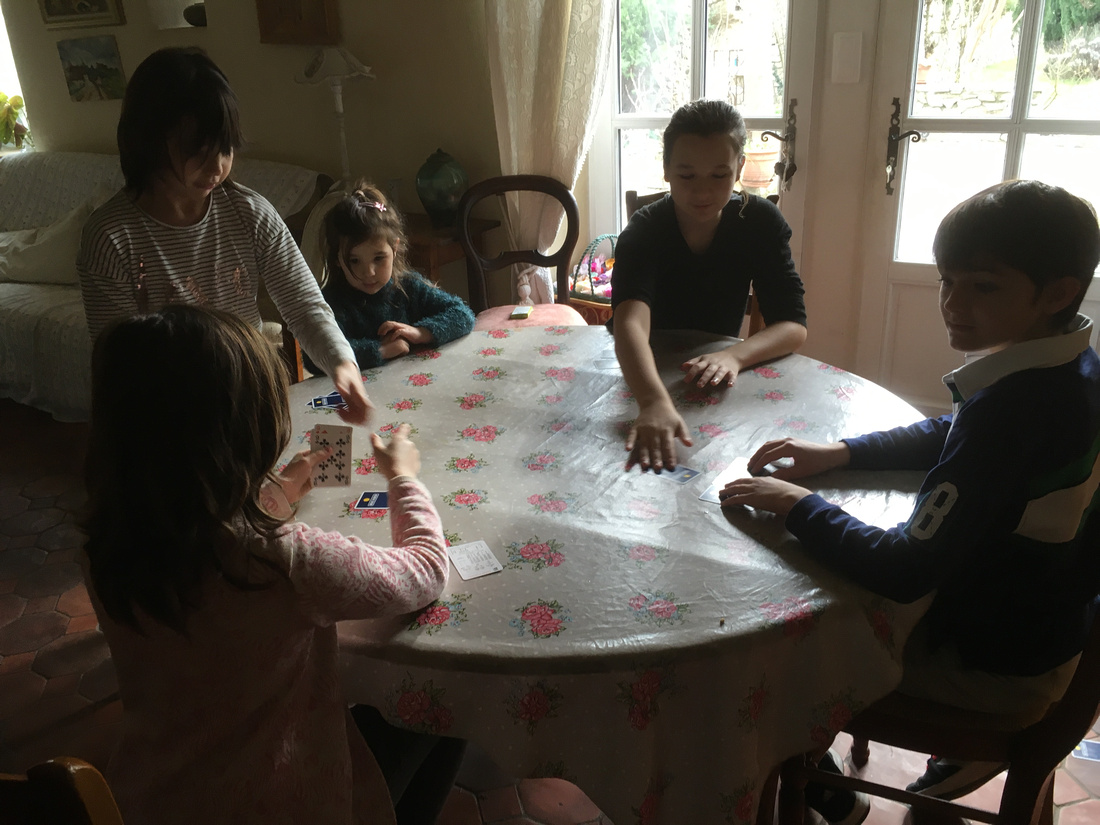 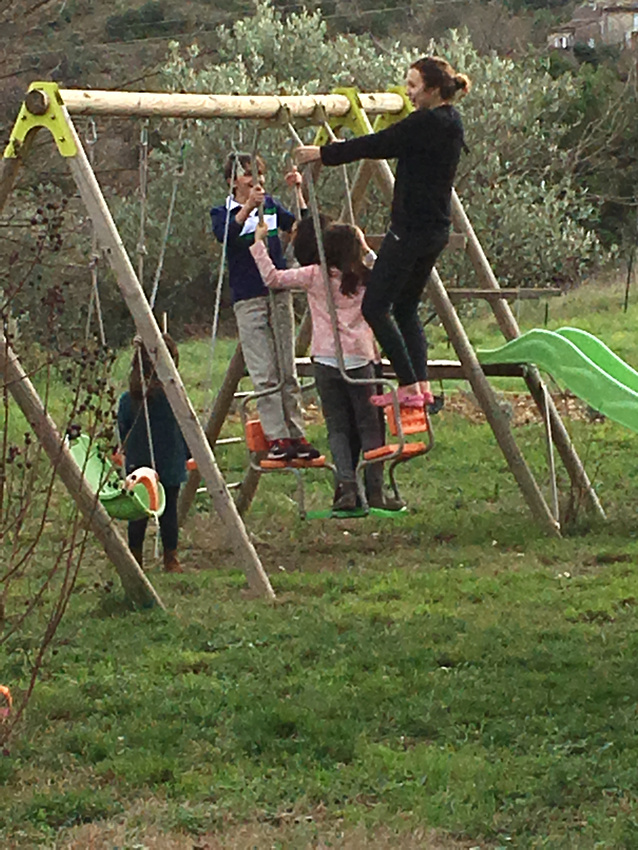 After a few hours it was time for lunch.  Elsa’s parents used to own a restaurant and they are excellent cooks.  We had enjoyed a very fresh and tasty salad, and a lemon chicken tajine (Moroccan dish) that includes lemons that are cooked for a very long time and become soft.  And of course, some great bread.  It was a terrific lunch.

After lunch came the cheese platter.  Erik was laughing as he knows that I'm generally not a fan of cheese.  But hey, we were in France, so I gave it a shot.  I was encouraged to pick multiple slabs of cheese from the 6 - 8 options that were presented to me.  The portions I chose were considered tiny by French standards, but huge for me, and I not so subtly avoided Roquefort and other more adventurous, heavy -duty cheeses. 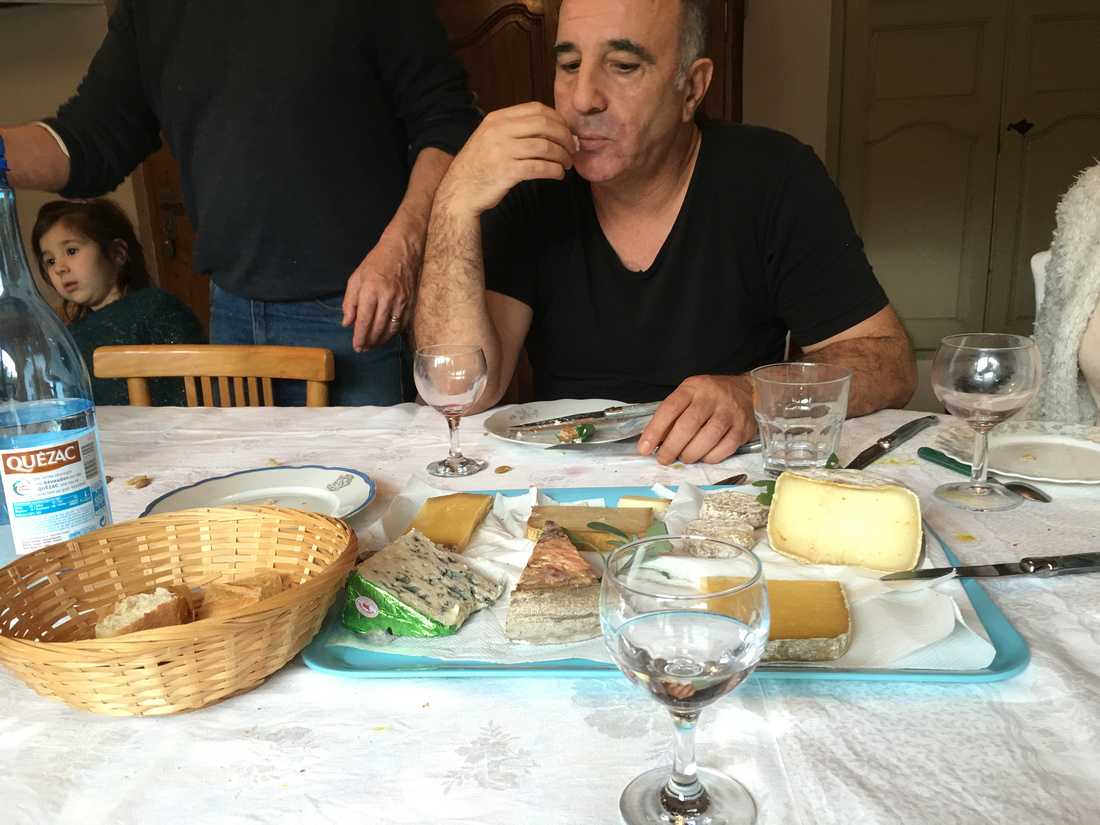 Next was dessert, which included homemade profiteroles for the kids and a "dessert made for Kings" for the adults.  It was a whole pear covered in chocolate, with fresh whipped cream on the side and a sprinkle of almonds.  As you can see, this was no ordinary lunch! 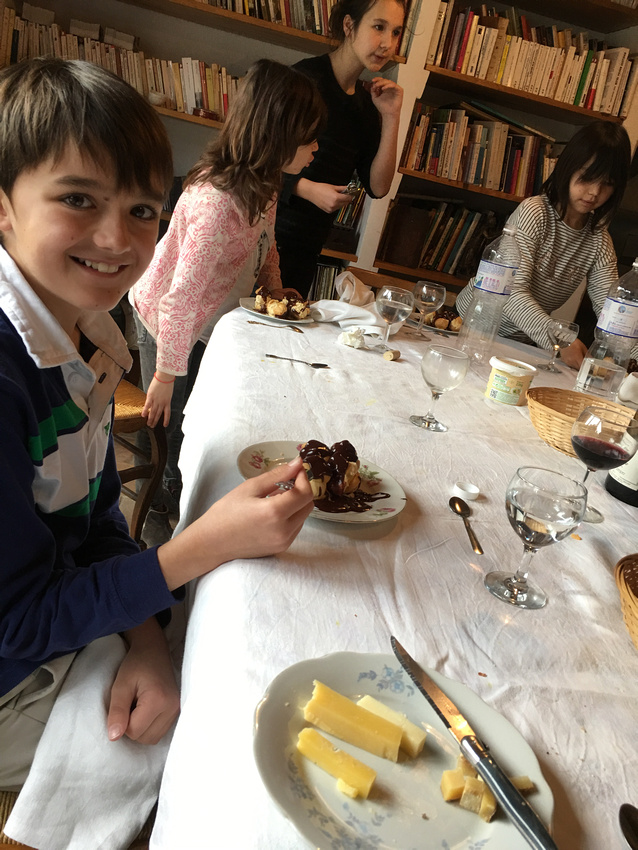 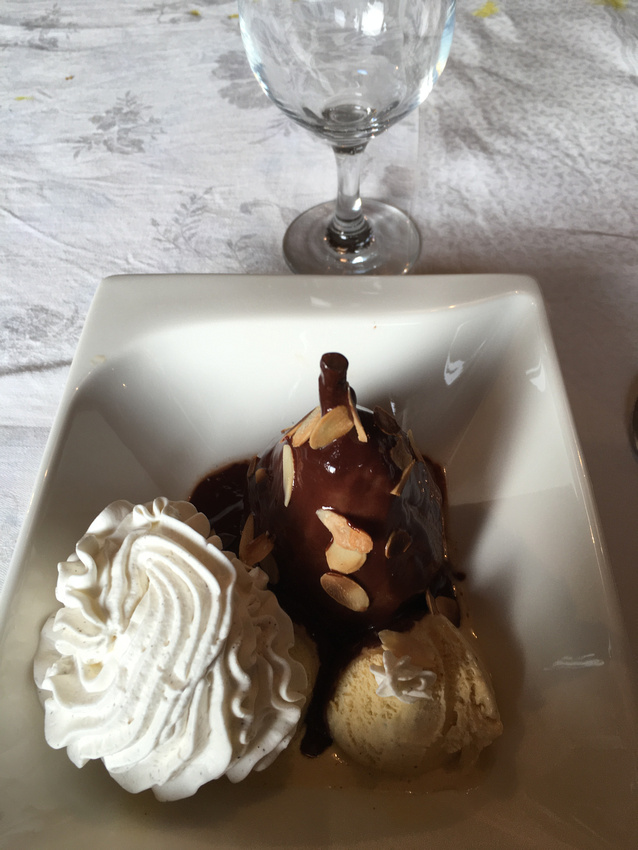 After lunch, we had some sparkling apple cider and were then invited to participate in a family tradition that only happens once a year.  The mother of the family has a dough recipe that is kept secret and is passed down through the generations.  The dough is brought out once per year for the New Year and the family makes beignets together.  The kids, including Erik, were put to work, flattening the dough with rollers before placing it in oil and handing it off to the father to cook.  Once the beignets cool, they are placed in a bowl of sugar and then it's time to eat, which Erik and I were happy to do! 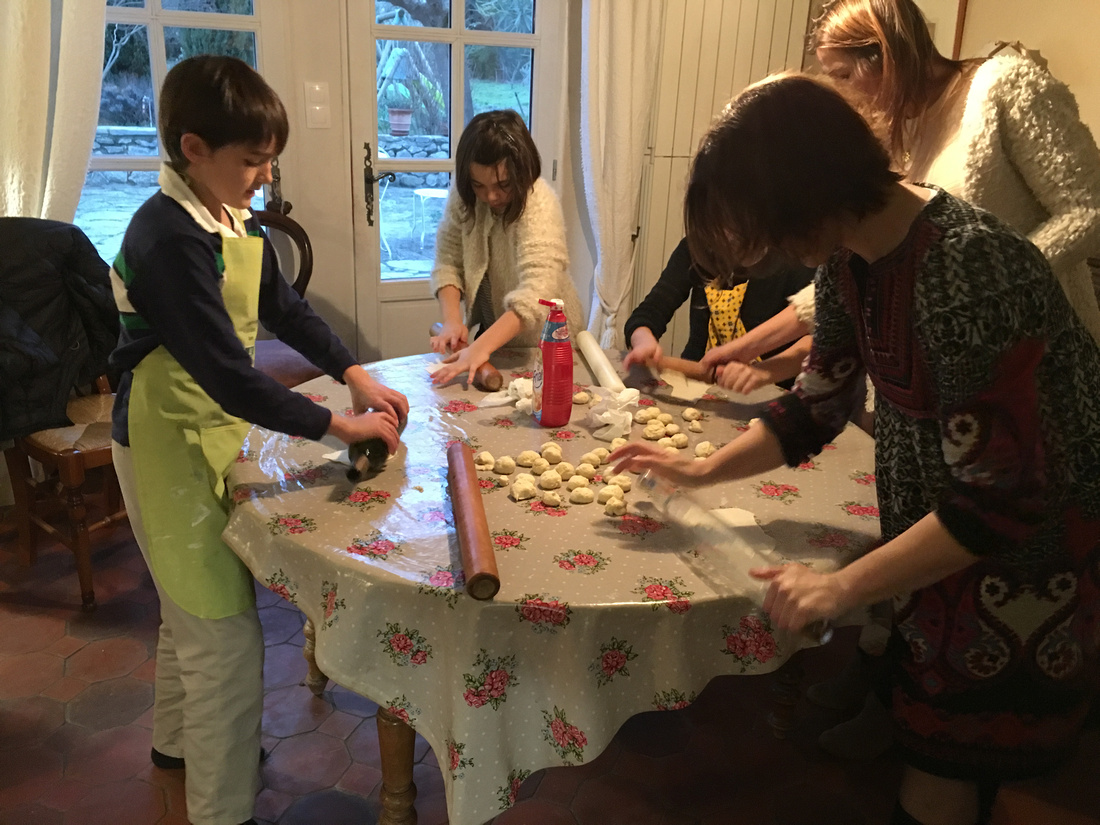 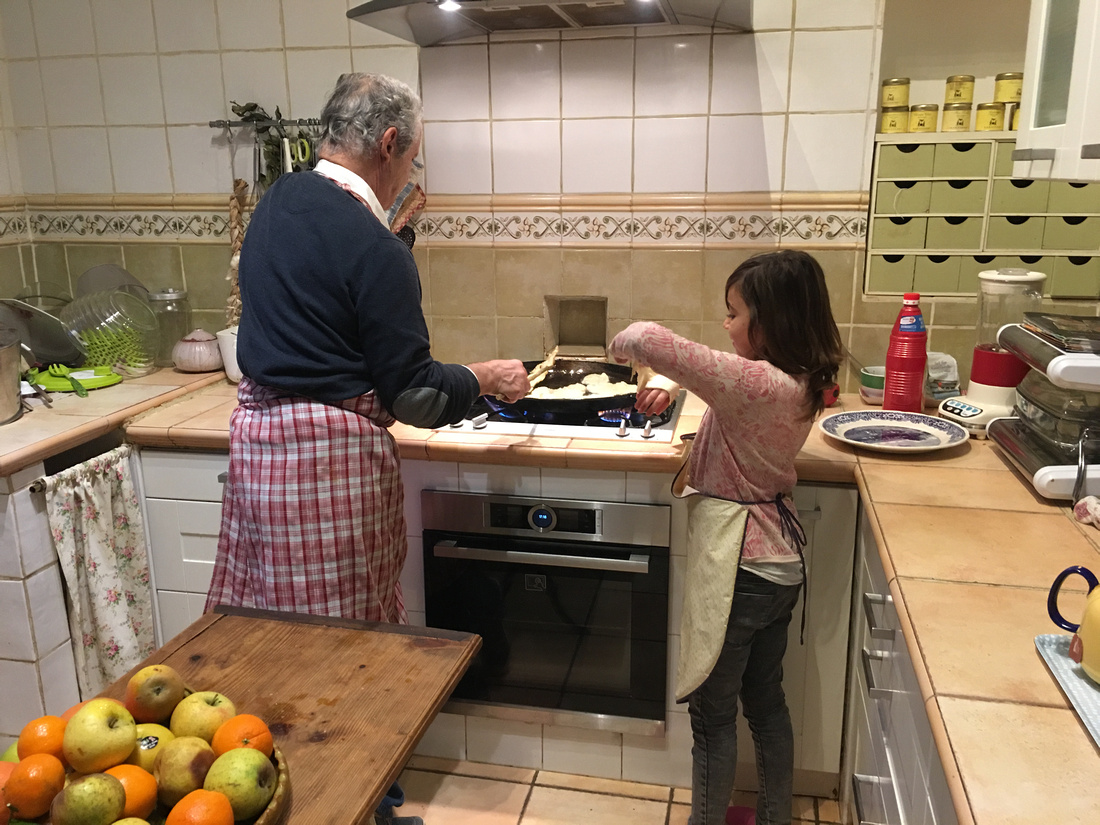 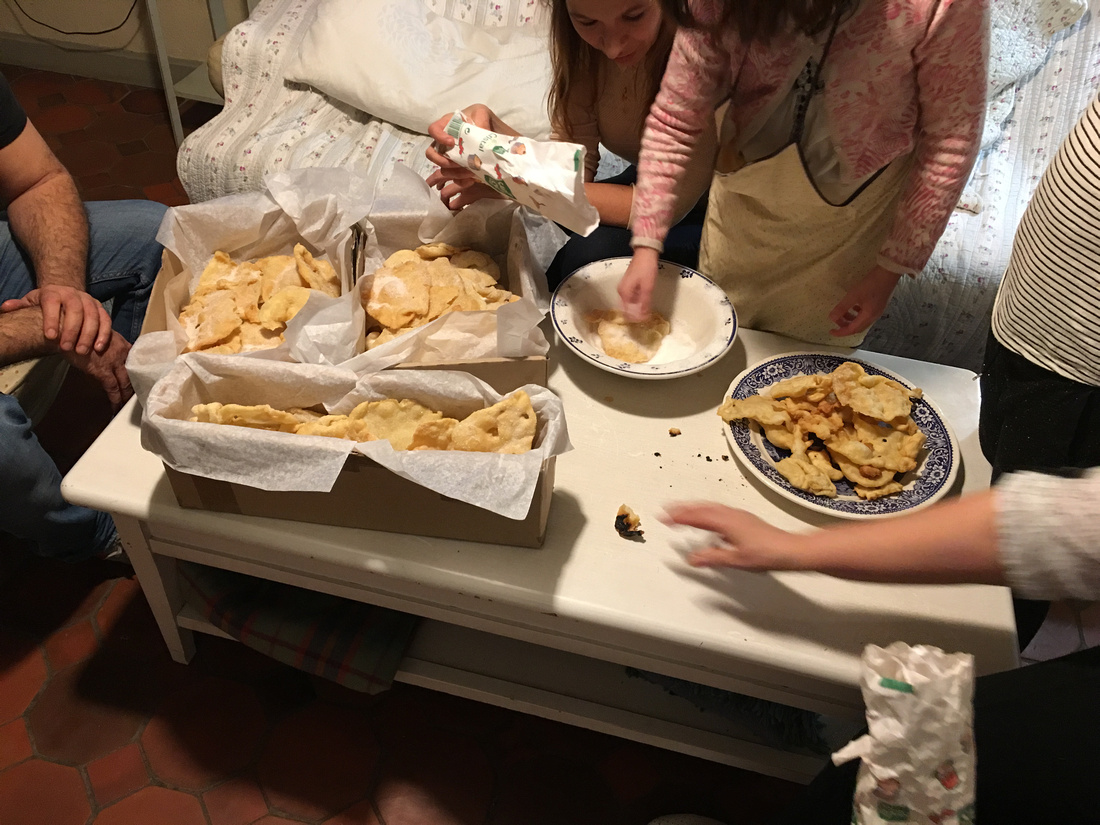 We had a great time and were very grateful for the glimpse into this special occasion for the family.  Around 8:30pm it was time for Erik and I to hit the road as we still had a two-hour drive ahead of us to our hotel in Aix-en-Provence.  We gathered for some group photos, said our goodbyes, and thanked everyone for a terrific evening that we won't forget. 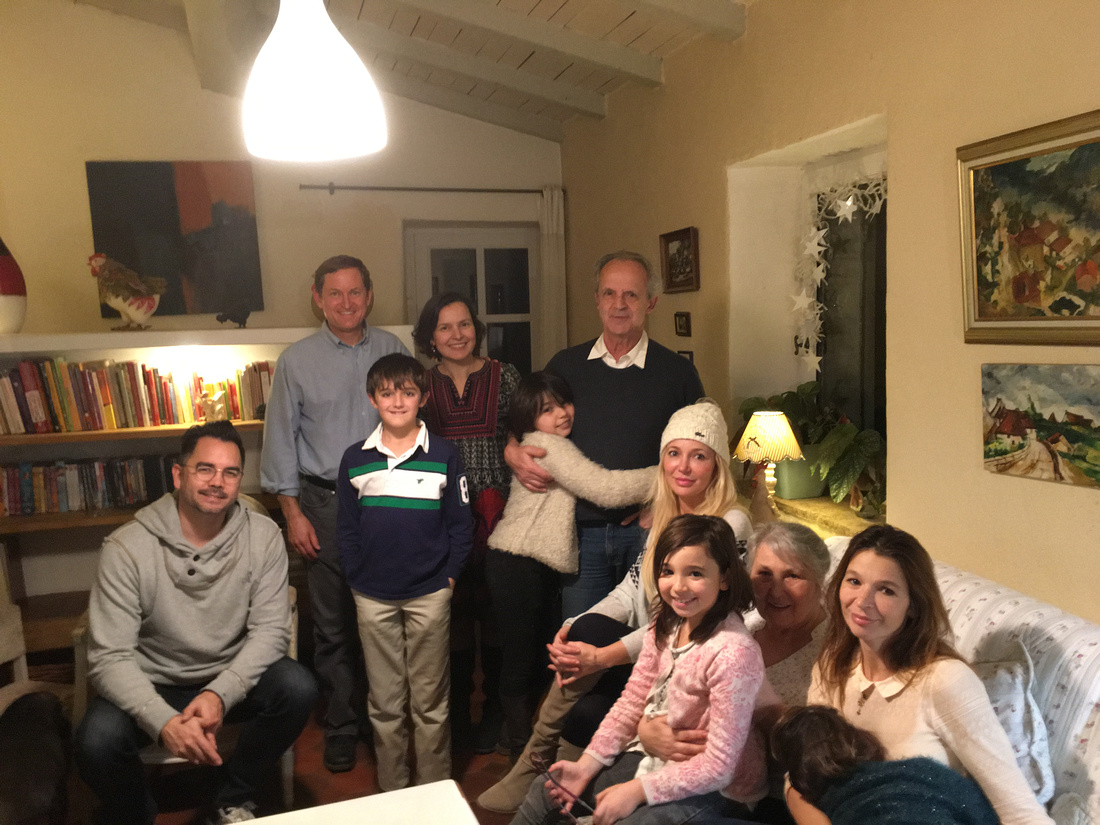