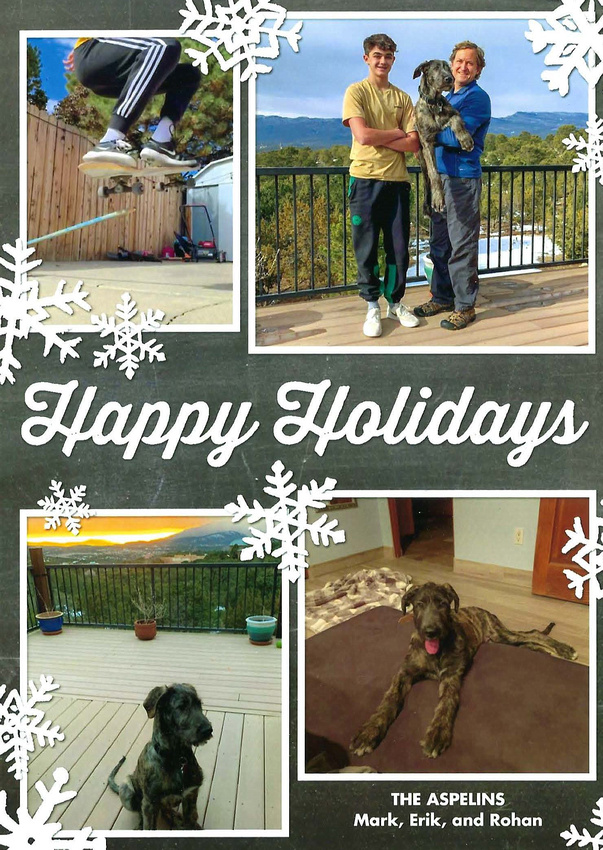 2020 will no doubt be the year that everyone will remember as the time when my son Erik became taller than me.  Oh, and there was that COVID thing too.  I’m happy to report that I’ve been able to avoid Coronavirus so far, probably due to the fact that I’ve been aggressively pursuing a “social distancing” policy for 20+ years.  My parents and son are unscathed so far too and they are doing well.  My niece and nephew, on the other hand, both got COVID at the same time, while attending college in different states.  Thankfully, they recovered quickly, other than some lingering impact to their sense of smell and taste … but the impact was not enough to get them to try my infamous green vegetable smoothies during their visit for Thanksgiving.

Like many of you, I entered 2020 with big plans, including two international trips.  Instead, my most exciting trip of 2020 was a 35-minute drive to Southwest Gastroenterology Associates to experience my first colonoscopy.  They declined my request for a virtual visit.  The procedure itself was nothing compared to the “preparation” that started 18 hours earlier.  My intestines have seen some serious combat over the years with my travels to many far-flung places, but it’s not a fair fight when I’m asked to drink a “preparation formula” that I’ve heard accurately described as a collaboration between Ex-Lax and Taco Bell.  Let’s just say that by the time I arrived at the clinic for my procedure, I no longer cared what they planned to do to my body.  I was more concerned about what might happen to them, as I could tell from the unsettling gurgling in my intestines that there was more work to do, and I had front row seats for the past 18 hours to know what my body was capable of.  Fortunately, I opted for the “I don’t want to remember anything that happens during the procedure” option.  Not exactly “reason for the season” material to include in a Christmas card but, when life gives you lemons, make lemonade.  And when 2020 gives you a colonoscopy … well, there you have it.

So, what did I do with my treasured “use it or lose it” vacation time that I accumulated in 2020?  I partied Marie Kondo-style by immersing myself in the art of tidying.  Rather than explore the mountains and lakes of Patagonia, I dumped everything I owned into one room and spent over 10 hours each day for a week holding up every possession I own, one at a time, and asking myself “Does this spark joy?”  Instead of soaking in hot springs in Iceland, I was holding up old souvenirs and mementos and asking myself “Does this reflect who I am becoming, not who was in the past?”  On the day I should’ve been enjoying the festive atmosphere of the Euros (soccer) in Copenhagen, I was re-folding my clothes and stacking them vertically in drawers (which I now really like!).  In the end, I thanked about half of my possessions for serving their purpose (including over 600 books!) and put them to work in the circular economy, wherever that might take them.

Let’s see, what other boring stories can I share.  Oh yes, I dug a big hole in my backyard!  Pretty exciting, I know.  I spent many hours with a pickaxe and shovel to install a pond to support the local wildlife who frequently stop by for a drink.  I’ve even made friends with a large number of deer that regularly pass through my yard, to the point where I can now sit outside near them, as close as 10 feet away, while they take advantage of the water and corn that I provide.

As for my job (Program/Project Manager at Optum Healthcare … part of United HealthGroup), everything is going well.  I’m very fortunate to be in a role that was not impacted with COVID.  I was already working 100% from home prior to COVID, so nothing really changed for me … and I still love working from home.  The only significant change from a work perspective is that I gave up my side gig as a personal trainer and substitute yoga instructor.  While I miss the people that I worked with at the gym, I do enjoy the extra free time.

The only other exciting news to report is that I’m now a COVID puppy statistic.  Yes, I joined the many people out there who decided to get a dog.  On December 5th, my son and I drove to SW Missouri to pick up the new addition to our family – a 4-month-old Irish Wolfhound named Rohan.  We pronounce it “Rowan” as it’s easier to say quickly when he’s chewing things that he shouldn’t be chewing, which is often.  I’m hoping to train him to become a therapy dog and take him to hospitals, hospice, and/or retirement communities, but the jury is out on that one.  We have a long way to go before he will be ready for something like that.  I have a sneaking suspicion that hospital patients will not be eager to have an animal the size of a small pony galloping around their room, gnawing on their arms, legs, and furniture, or tearing their clothes to shreds.  Rohan blissfully ignores all commands except for “sit” or “come”.  “Come” is particularly easy as Rohan is my shadow.  I don’t have to say anything.  I can’t go anywhere in my house without him following close behind.

As you can probably see from Rowan’s clown feet in the card photos, he’s on track to become a very large dog.  His father is around 220-230 lbs., so chances are high that he will become a gentle giant.  Apparently, Rohan didn’t get the memo about the “gentle” part yet.  However, he’s certainly on track for “giant” status – at 17 weeks of age, he is already 60 lbs., and growing fast.  Rohan will likely be taller than both Erik and me by the time he is fully grown, although Erik might give him a run for his money.  I’m 5 ft 9 and a half, which I liberally round up to 5 foot 10 whenever asked, and it looks like Erik is at risk of breaking the 6 ft barrier at some point in the not-too-distant future.

Speaking of Erik, he is doing well.  He is 15 years old and is just about done with his driving permit requirements … less than 7 weeks and he will be 16.  Gulp.  Erik is still into skateboarding, doing flips and other tricks on the trampoline, and pretending like he is paying attention during his Zoom classes for school (all of his classes have been via Zoom this year).  But whatever he’s doing, it’s working.  He is doing well at school this year.  He is also really into working out … he goes to the gym nearly every day, but he knows his stuff and avoids working out the same muscle groups on consecutive days.  In short, Erik will soon be taller than me, stronger than me, and he’ll be able to kick my butt.  I’ve penciled in a New Year’s resolution to be extra nice to him moving forward.  Luckily, that will be easy to do as he is a great kid.

One of the positives of being stuck at home most of the time this year is that it gave me some additional free time to keep myself fit, get back into birding (from my backyard), and I’ve finally made some progress on guitar … I’m slowly pushing past the level I’ve been stuck at for the past 20 years.

That’s all the news I have for this year!

Wishing you and your family a Merry Christmas, Happy Holidays, and all the best in the New Year.

Mark Aspelin is a freelance writer and author of two books who has enjoyed a wide variety of adventures in his travels to 100 countries (so far) and all 50 U.S. States.  Mark lives in the mountains outside of Albuquerque, New Mexico.