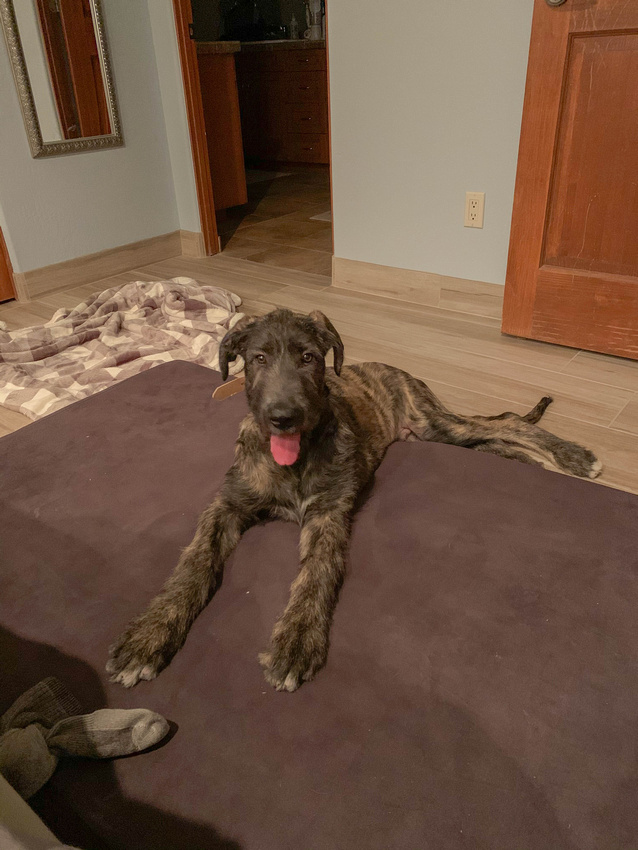 It's hard to believe, but I'm now the owner of an Irish Wolfhound puppy.  The sale and adoption of dogs has spiked along with COVID, so I suppose that makes me a COVID puppy statistic.  In truth, my decision to get a dog pre-dates COVID.  After my last Irish Wolfhound (Séamus) passed away a few years ago, I told my son that I wouldn't consider getting another large dog until I had a job that enabled me to work full-time from home.  Now that I've been working full-time from home for nearly 18 months, and I'm not exactly doing much in the way of travel these days, I was out of excuses.  My son and I agreed that the timing was right to take the plunge.

After reaching out to several breeders in early November, I purchased a dog from a breeder in Missouri.  I liked the look of the dog from the photos, liked what I heard from the breeder during our telephone conversation regarding the dog's health, temperament, and parents.  The breeder said the dog looks "moosy" and will likely be very large.  Fortunately, I have plenty of indoor and outdoor space and I'm comfortable with the idea of having an animal the size of a pony running around the house.

Since I had family staying at my house for Thanksgiving, the breeder agreed that it would be ok for me to pick up the puppy when he was 15.5 weeks of age (his birthday is 8/18/20) as long as I paid in full in advance.  I agreed, wired the money to the breeder's account and it was a done deal.  I was to pick up the new member of the family on the morning of Saturday, December 5th, 2020.

Here is a photo of the dog that we were to pick up, when the puppy was 13 weeks old. As soon as my son finished school on Thursday, December 3rd, we had a quick dinner, packed up the car, and hit the road from my home in the mountains outside of Albuquerque, New Mexico.  Our destination for the night was a hotel in Shamrock, Texas.  Why Shamrock?  My original plan was to spend our first night in Amarillo, TX, but I read that the COVID was spiking in Amarillo.  As a result, I thought it was worth the extra 90 minute drive to get to the Holiday Inn Express in the small town of Shamrock, which has a population just under 2,000 people.  We had a 5 hour drive ahead of us.  Whenever my son and I go on road trips, we behave badly when it comes to food, and this was no exception.  Our first rest stop was a Dairy Queen in Santa Rosa, New Mexico.  The drive went by relatively quickly, and we spent about two of the hours listening to an audiobook about Irish Wolfhounds to prepare us for what lies ahead.  We made it to our hotel a little past 11:00pm, checked into our room, and finally went to sleep around midnight.

The next morning we got up around 8:30am, got cleaned up and by the time we made it downstairs, we had just missed the 9:30am window for the complementary breakfast.  We decided to hit the road and see what we can find.  A short time later, we crossed the border into Oklahoma.  My son noticed a sign for a BBQ restaurant in Elk City, Oklahoma (he is a big fan of ribs... me, not so much). But I agreed, why not.  So we soon found ourselves at Billy Sims BBQ in Elk City.  The first thing that we noticed in climbing out of our car is that masks seemed to be optional.  This was quite a change from the vibe in New Mexico, where masks are mandatory these days.  We wore our masks into the restaurant, just in case, but it turned out that we were the only people in the restaurant since it was still early for lunch.  The woman at the front counter was super friendly... which seemed to be a trend in Oklahoma.  Everyone we met in Oklahoma seemed very friendly based on our limited experiences.  My son was impressed and thought that it was a big difference from New Mexico.  For me, I think people in New Mexico are very friendly compared to a lot of other places, but I had to agree that our experiences in Oklahoma were impressive.

We ate the food in our car.  My son ordered a full slab of ribs... a bit overambitious, but he managed to eat about 2/3 of it.  I had some brisket, sausage, and beans... a far cry from my normal breakfast of oatmeal with blueberries and a large vegetable smoothie.  The food turned out to be good, but not great.  Overall, we gave it a 6 out of 10.

An hour or two later, we decided to give Braum's Ice Cream a try... it appeared to be a very popular chain.  It was a hit.  My son really liked it - he said it is now his favorite ice cream, and the prices were very cheap.  It's safe to safe that this will not be our last Braum's stop on this trip. 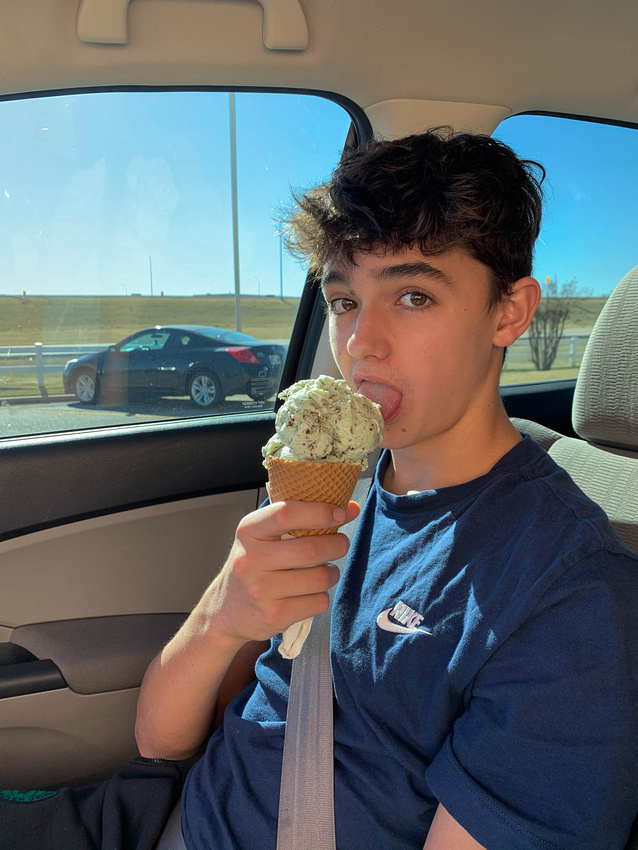 Braum's ice Cream in Oklahoma was a hit

After a few more hours on the road, we arrived at our next destination - the Holiday Inn in Joplin, Missouri.  The Holiday Inn was quite a bit nicer than where we stayed the previous night, and we were very excited to learn that they had a fitness center... and it was actually open!  We checked into our room, and immediately went downstairs to workout... it was a nice facility and we were the only ones there.  The workout felt great after spending the day in the car. 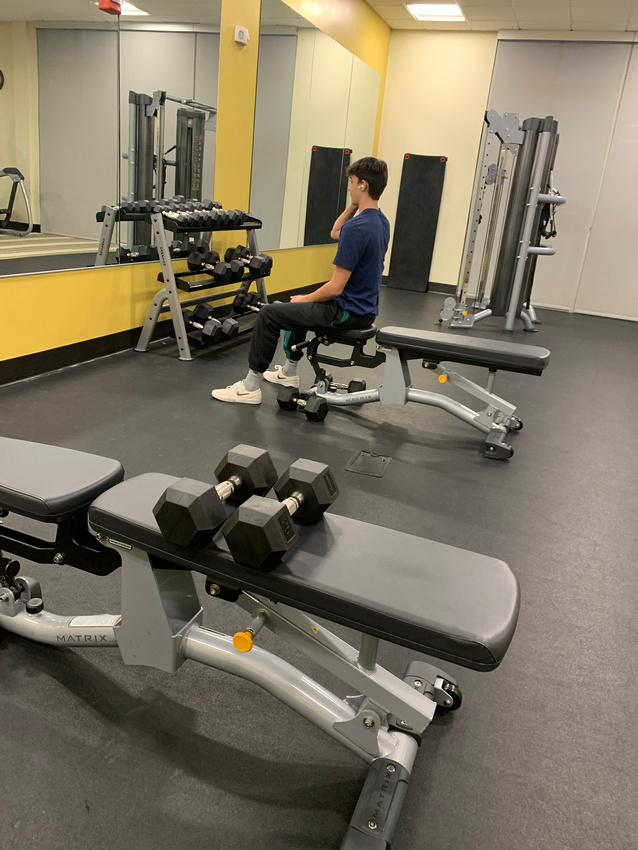 A much-needed workout at the hotel gym

After a good workout and a refreshing shower, we decided to get a takeout pizza from Old Chicago, which was right down the street.  I'm typically a healthy eater but, like I said earlier, it's anything goes during our road trips.  For some reason I thought Old Chicago was deep dish, which Erik had never tried before, but it ended up being like a "regular pizza".  Another 6 out of 10 meal in our book.

We watched the end of the movie Groundhog Day (a classic!) and then the Han Solo movie came up next.  Darn.  So much for an early bedtime.  We both enjoy Star Wars movies, so we stayed up until 11pm, despite an early wake up tomorrow, and realizing that this would likely be my last night of uninterrupted sleep for a very long time.

I told the breeder that we would arrive around 7:30am so we had an early morning.  I stumbled out of bed around 5:45am to get a shower.  We packed, went to the Waffle House down the street to get two waffles to go, and we were back on the road.  Our destination was the small town of Granby, Missouri (population is just over 2,000 people).  We found the breeder's farm relatively easily, thanks to Waze.

This was the big moment.  It was time to meet our dog.

We were immediately greeted by four large Irish Wolfhounds.  One of the dogs was particularly huge.  That turned out to be the father of our dog.  The breeder called him "Fire" (he has bright orange eyes, but you can't tell from the photo) and the breeder said that he weighs about 220 - 230lbs.  I was surprised at the size - definitely that biggest Irish Wolfhound that I have ever met.  I thought my last Irish Wolfhound was large, and he weighed about 150lbs.  Here is a photo of the parents (below).  The picture doesn't do justice to the size of Fire.  The mother was smaller, but still substantial.  They were both a bit scruffy after playing outside in the mud. We had fun talking with the breeder and meeting the adult dogs.  Then it was the moment of truth.  We saw our dog tied on a leash about 100 feet away, and we walked down to say hello.  He was a bit skittish, but that is understandable given the circumstances.  We said hello and hooked him up to our leash, but he had no interest in moving.  In the end, I had to pick him up and carry him to the car.  I put him down for a minute next to the car so that I could open the back, and he immediately took a big dump ... really big.  Needless to say, I was very grateful for that!  I picked him up again and put him in the large crate that I had set up in the back of my car. 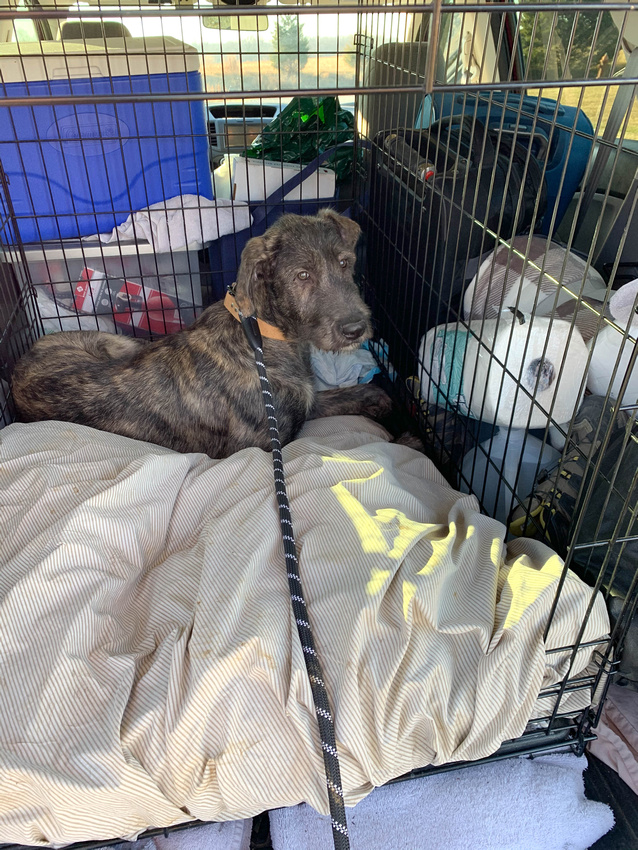 We signed some paperwork, shook hands, and we were off!  About 30 minutes down the road, we found a good spot to pull over to let our new dog out to give him a short walk and some water and to start to process of bonding.  He was definitely skittish and was not a fan of me picking him up to get him in and out of the car.  We ended up stopping frequently - every 1-2 hours (at least) to let the dog out.  And I'll confess that there were two more Braum's stops along the way home.  All in all, he was a great traveler, with no accidents in the car! 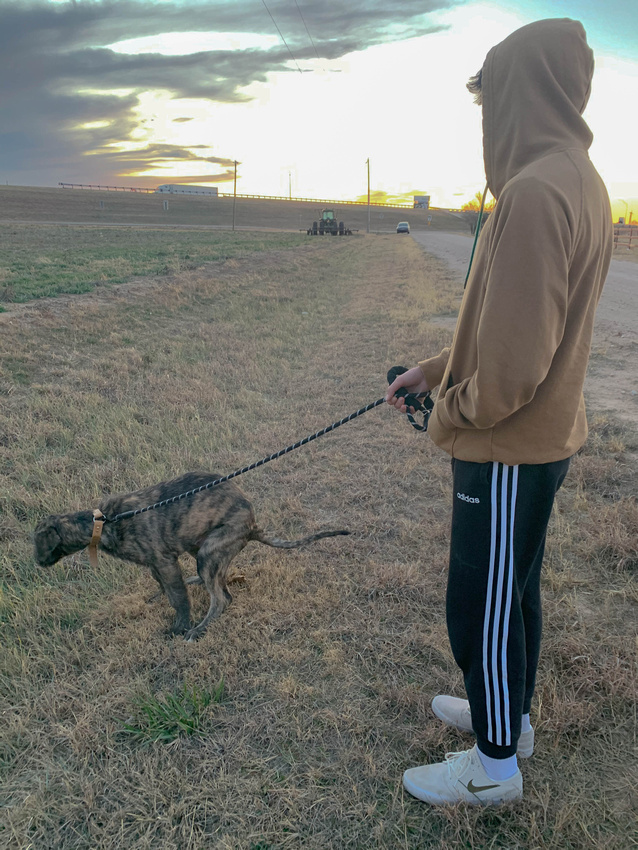 The moments we cherished during our long drive home 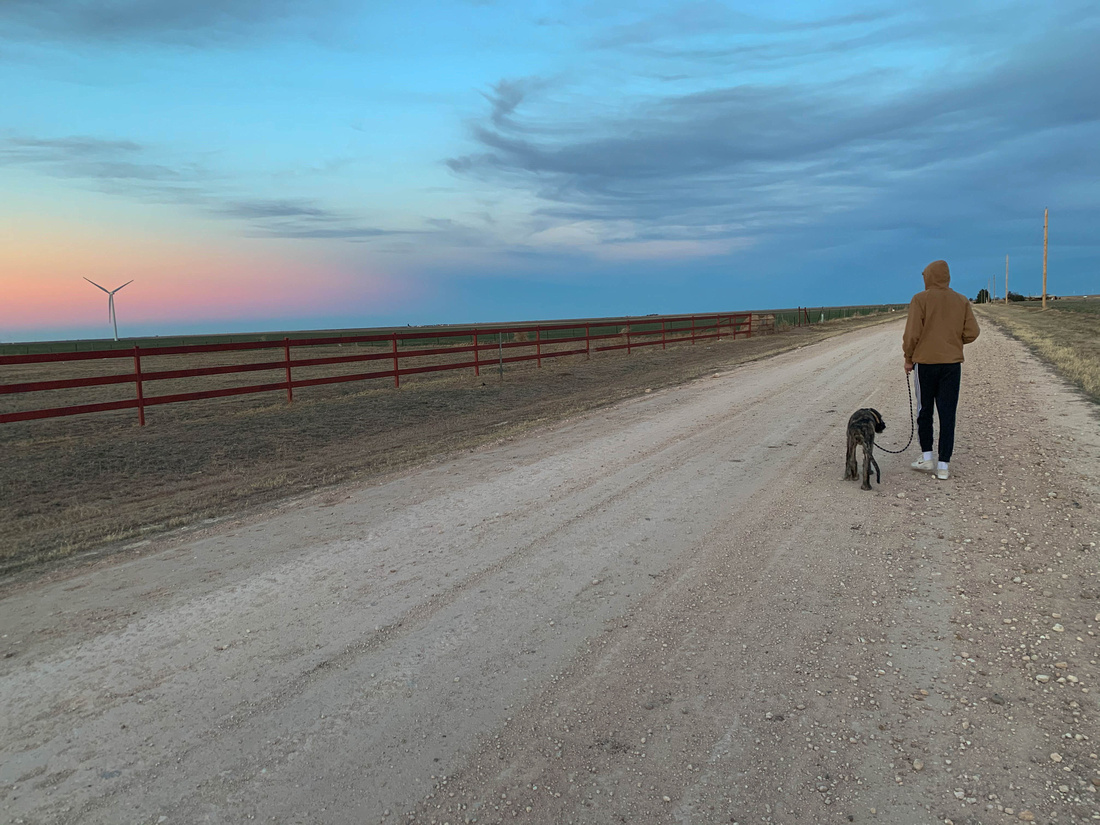 Talking Rohan for a sunset walk somewhere in Texas

During our drive home, we settled on the name Rohan as it is a Celtic name meaning "little red one" (he has some red color in him) and "keeper of wolves."  Of course it is also a Lord of the Rings movie reference ("land of the horse lords") and Lord of the Rings happens to be one of my favorite movies.  So it was official.  Our dog's name is Rohan, but we pronounce it "Rowan" since it rolls off the tongue a bit easier that way.

The first week at home was a busy one, but I'll save that for my next post.  Let's just say that Rohan has been my shadow ever since.  Here are three photos of Rohan on his first full day at his new home.

Exploring the upper deck for the first time 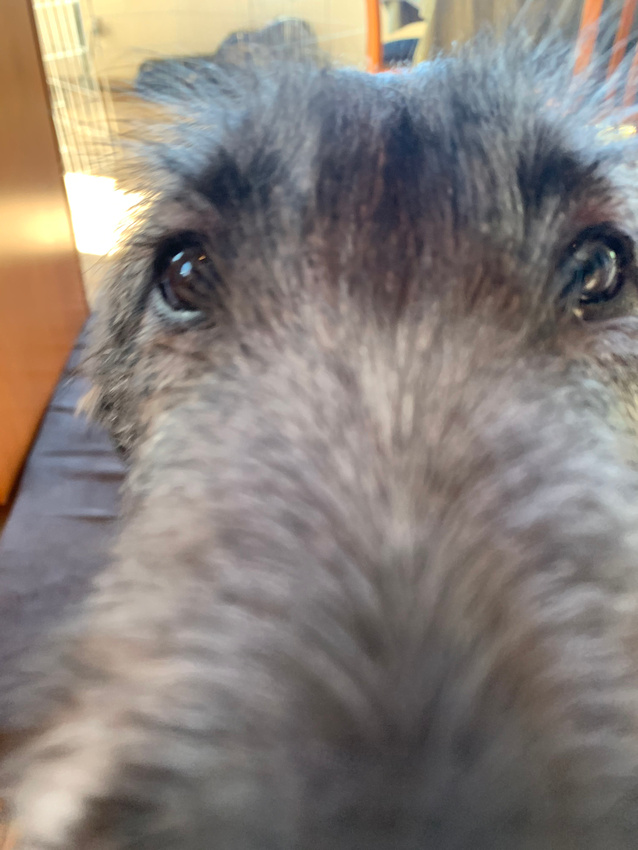 First night on his new bed