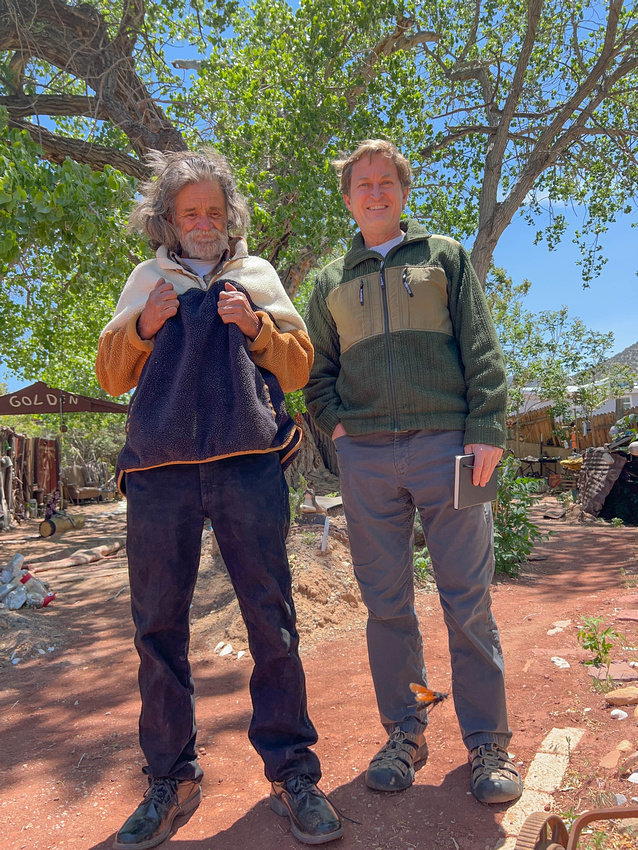 Leroy Gonzales (the Mayor of Golden), Mark Aspelin (that would be me), and a Tarantula Hawk Wasp (the photobomber)

I've driven by the town of Golden, New Mexico many times.  It's only a 25-minute drive from my house.  Usually, the town of Golden is just an inconvenience where I need to slow down on my journey to Santa Fe.  But this time, Golden was my destination.  Why, you ask?  To finally stop off at that place with the "free information" signs and lots of junk / art (depending on your perspective) in front of it.  I wanted to see what it was all about and meet the person who lived there.  So that's what I did a few days ago (Sunday, May 22nd, 2022). 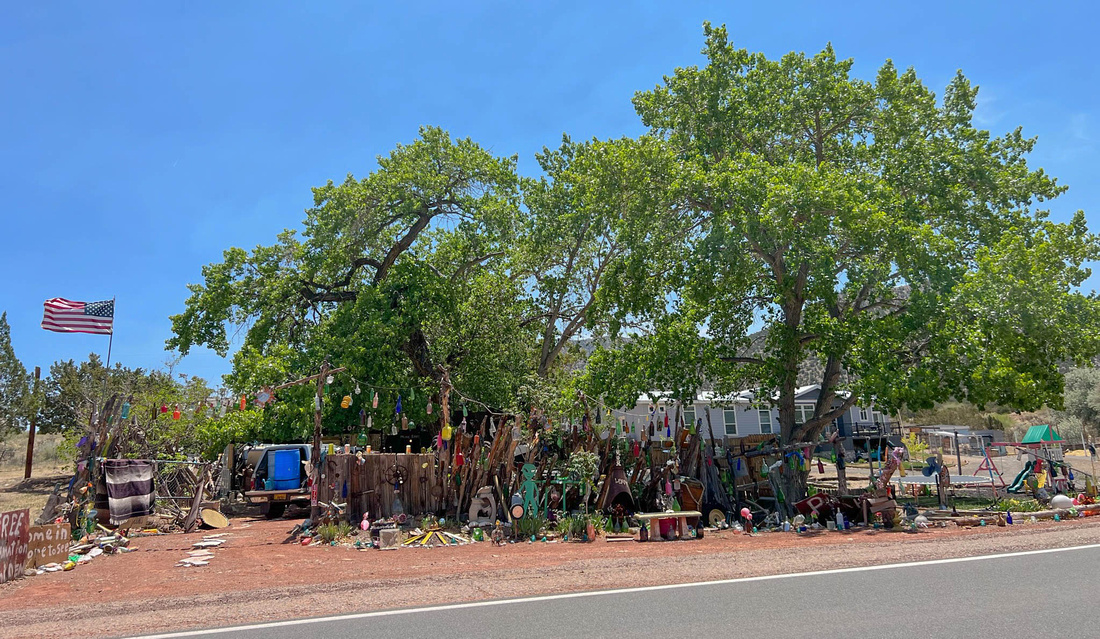 The view from the road while driving by "that place" in Golden, NM

First a bit about Golden.  Golden used to be home to Native Americans and Spaniards until around 1825, when gold was first discovered at Tuerto Creek on the southwest side of the Ortiz Mountains. This triggered the first gold rush west of the Mississippi River, well before the California Gold Rush (1848) and Colorado Gold Rush (1858).  A few small mining camps were initially formed with a few hundred people living in adobe houses.  The area was pretty low-key.  Then, around 1880, several large mining companies moved in.  The name of one of the mining towns, Real de San Francisco, was changed to Golden, with high hopes that there was a lot of gold to found and riches to be made.

At its peak, Golden had a post office (opened in 1880), a school, the San Francisco Catholic Church (opened in 1830), and several saloons and businesses, such as the Golden General Merchandise Store (opened in 1918) ... which is the only business in town that still operates today.  Today, it's called the Henderson General Store, a nod to the name of the owner.  That's why you'll notice that the Henderson Store website says it's been family-owned since 1918.  In the words of the website ...

"Purchased in 1918 by Ernest & Lucy Riccon, the Golden General Store served area residents with items for their daily needs. In 1962 the store was purchased by their youngest daughter, Vera, and her husband, Bill Henderson. As demand for a general store in the area declined, Vera and Bill began to trade merchandise for Southwestern Indian crafts. Sadly, Vera passed away in 2009 and Bill in 2015.  Today, their daughter and son-in-law, Desiri and Allen, carry on the tradition of selling high quality Southwestern Indian jewelry, rugs, and pottery at reasonable, competitive prices."

As the Henderson Store website blurb alludes to, Golden didn't turn out to be a boom town.  It was a bust.  By 1928, the post office closed and Golden officially became a ghost town.  However, you can still see some of the original structures in Golden, such as the most photographed building in Golden today - the San Francisco Catholic Church.  The church was restored in 1960 by historian and author of 22 books, Fray Angelico Chavez.  Chavez was an interesting character, a Renaissance man of sorts.  He was a Catholic priest (Franciscan) who served as a military chaplain in the Philippines in World War II, studied at the Vatican in Rome and at Oxford, and then returned to New Mexico to become a missionary at several rural villages throughout New Mexico.

Despite all that history, a case can be made that one of the most well-known landmarks in Golden today is Leroy's house ... the house with all the junk / art in front of it that I referred to at the beginning of this post. 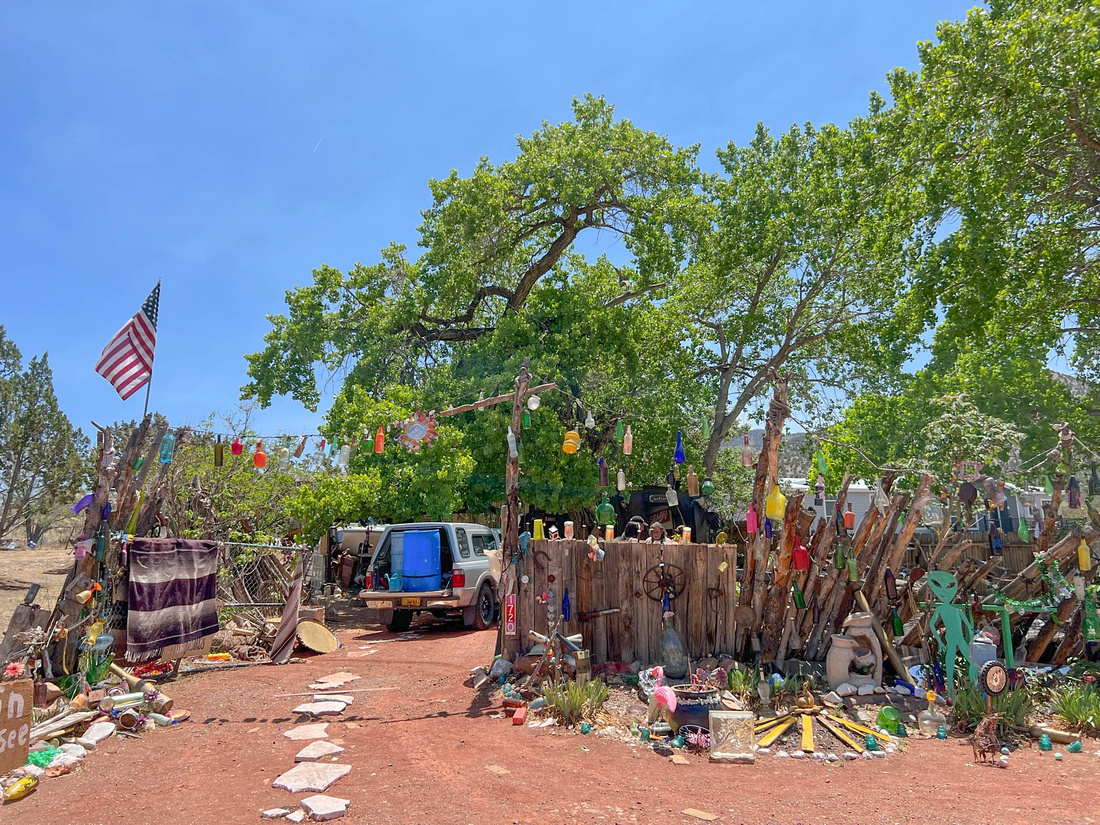 When I met Leroy, he was just wrapping up a conversation with some other visitors who departed as soon as I arrived, so I had Leroy all to myself.  Leroy was very friendly, and he immediately began to give me a tour of his art.  When I told him my name, he said that he had a grandson named Mark that his family called "Markie" when he was young.  We decided to stick with "Mark" for me.

Leroy told me that his Grandparents bought the land, and his mother grew up here.  Leroy has been living in Golden for about 22 years now (since ~2000), and he began his art display about 8 years ago (~2014).  I got the feeling that extra emphasis should be placed on the word "about" so don't hold me to those dates.  He started with displaying bottles and then continued to build on it over the years. 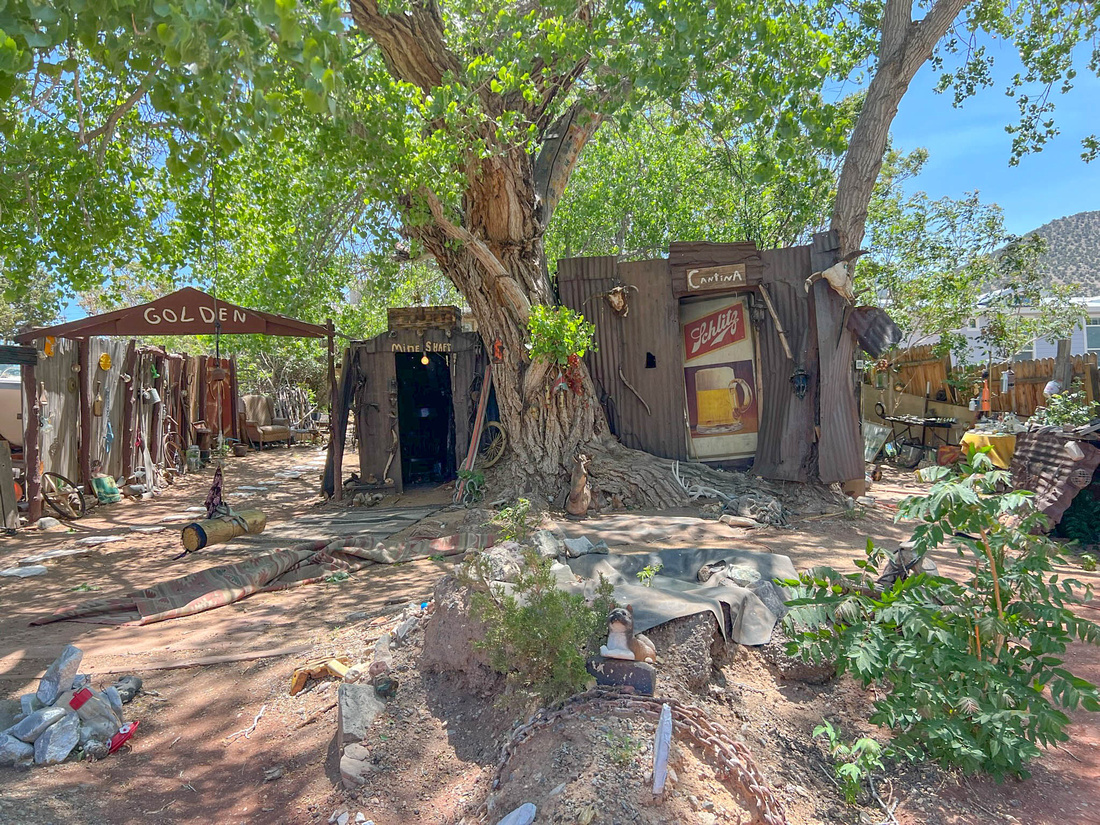 The Mine Shaft and Cantina from the outside, with a 200-year-old cottonwood tree that Leroy "tattooed"

... and a "Gold Mine" that he said goes all the way to the Ortiz mountains, but then smiled and clarified that it could go to the Ortiz Mountains.  He left out the "with a whole lot of digging" part.  But we had a laugh while glancing at the mirrors at the back of the Gold Mine that give the false impression of distance. 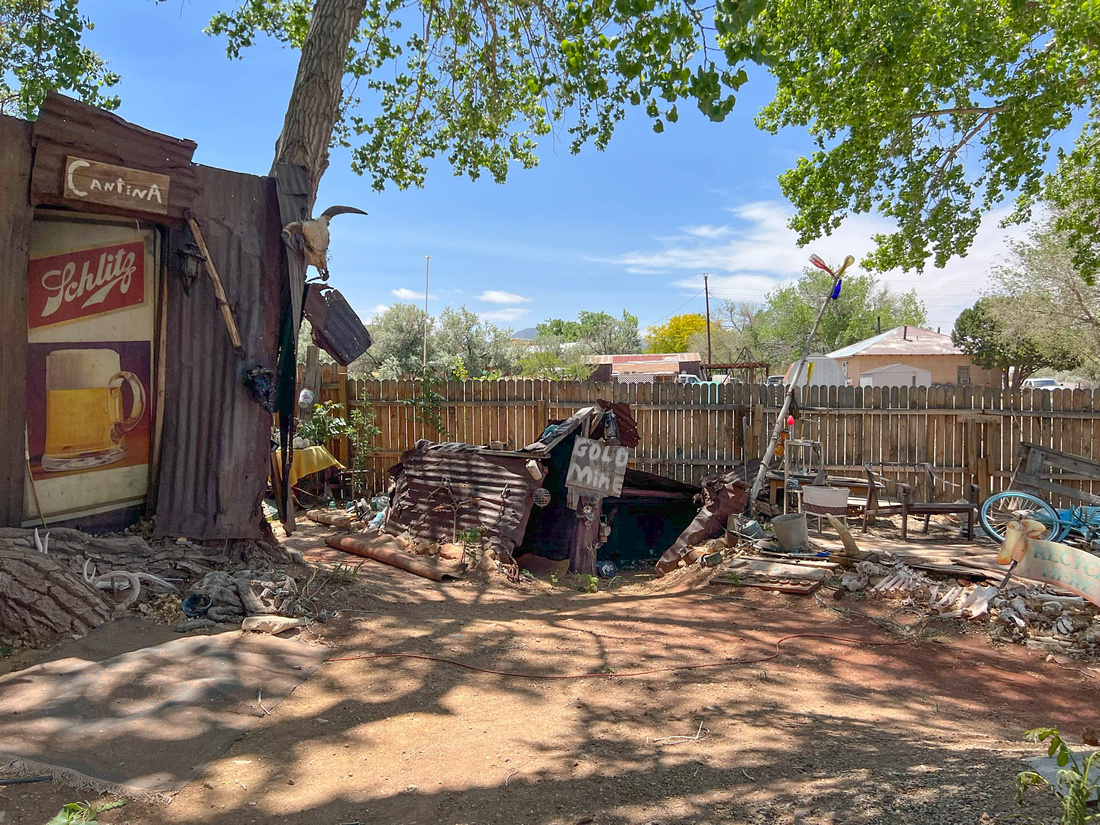 So, what's inside the Cantina and Mine Shaft?  Glad you asked! 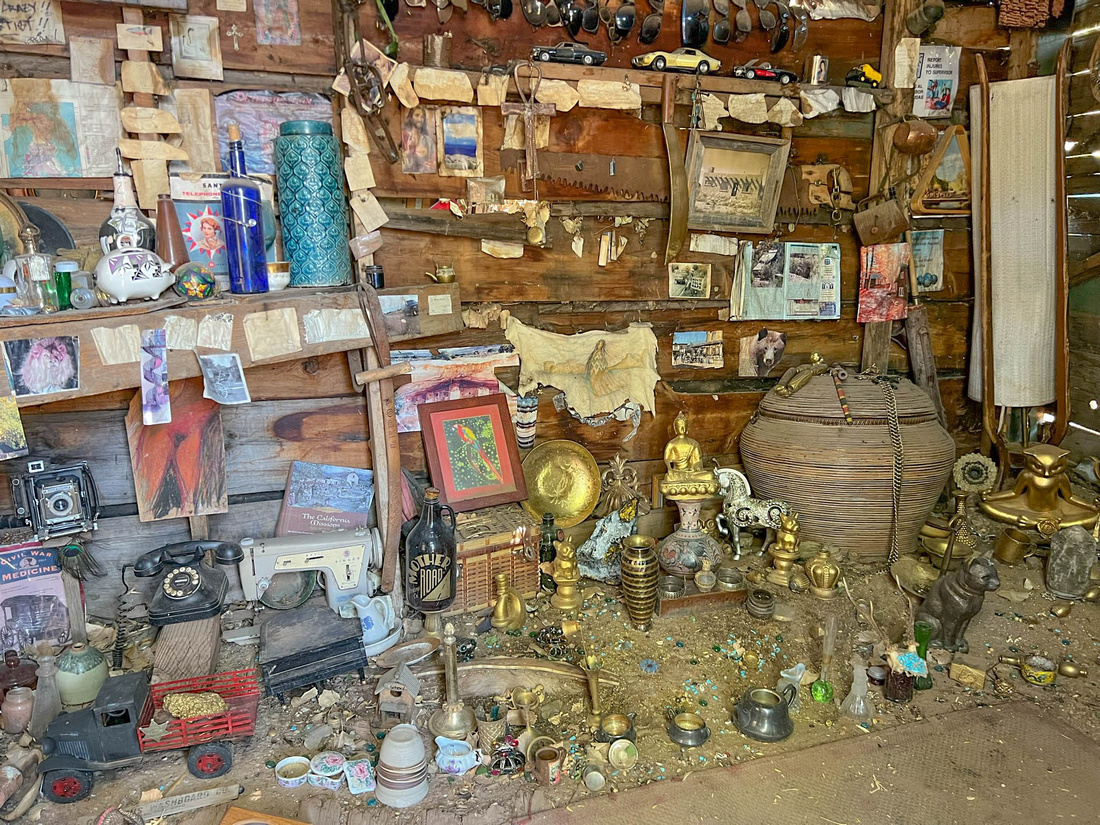 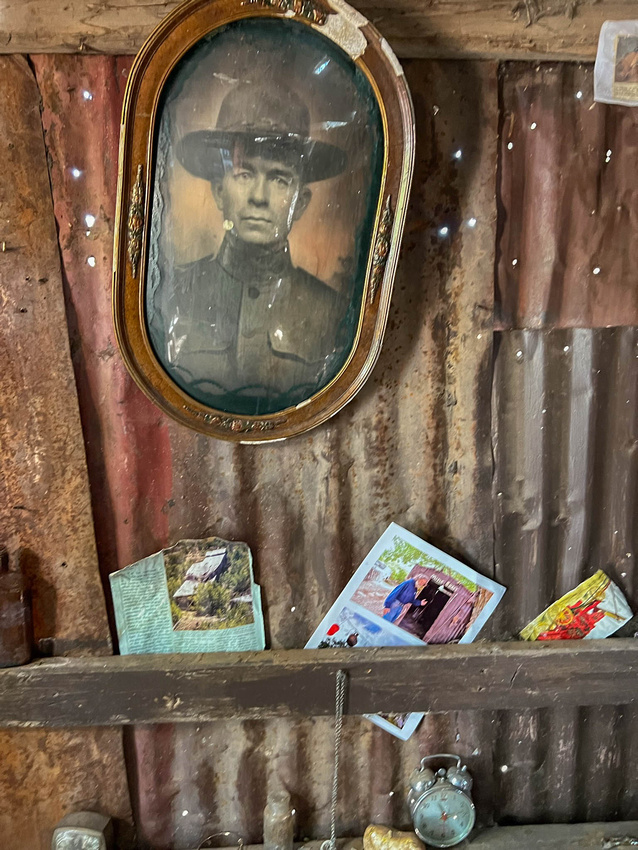 And there are plenty of outdoor exhibits ... 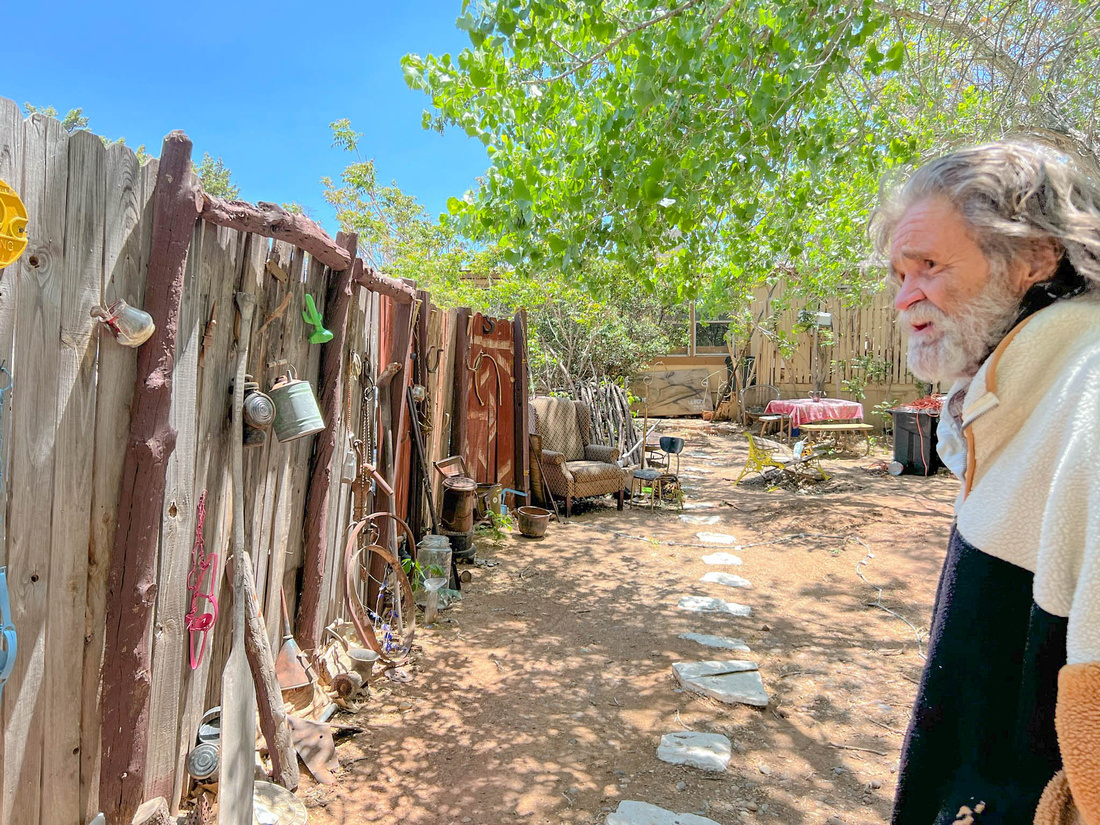 Leroy describes some of the art on the fence 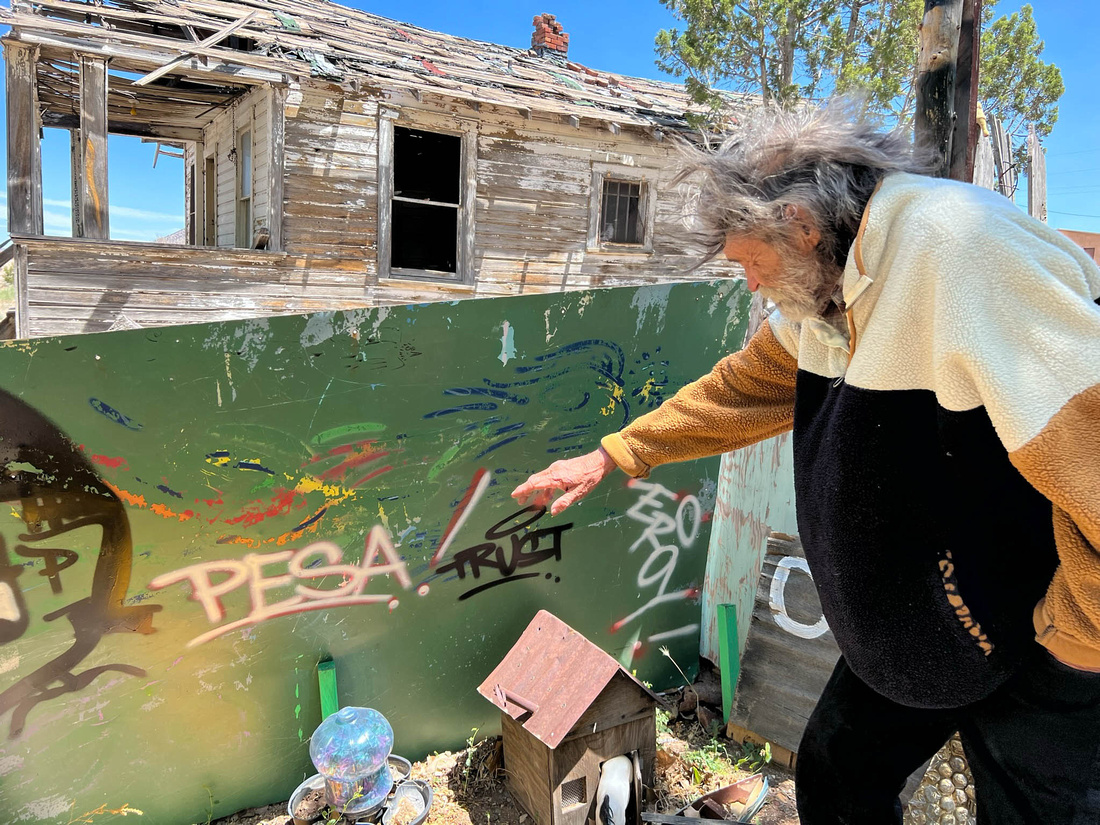 Pointing out two birds that are painted on the green background ... adding that somebody tagged it with graffiti 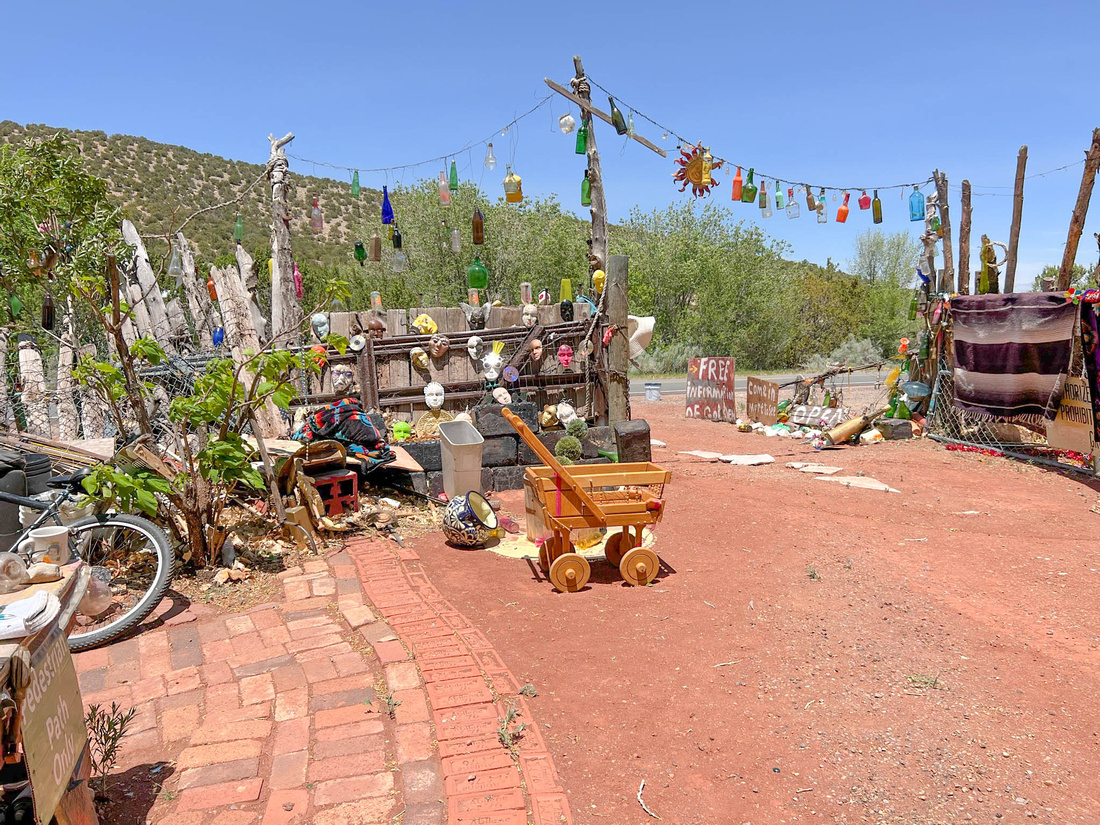 More art to see on the way out

There are other things I could share about his art gallery, but I don't want to spoil all of it, so I'll leave it at that.

I asked Leroy if he would be willing to take a photo with me.  He said "of course, take a photo of anything you like." So, I proceeded to balance my phone on a cluttered table, set the timer, quickly hopped over to position myself next to Leroy, who was ready in his mayor pose, and the next thing we knew, a tarantula hawk wasp decided to fly right in front of us!

Now, for those of you who aren't familiar with tarantula hawk wasps, they are amazing insects that deserve your attention, particularly due to bullet #4 below:

For those not familiar with the Schmidt pain index, let me explain.  Justin Schmidt is a scientist (entomologist) at the University of Arizona and author of the book "The Sting of the Wild".  It's a fun book to read, where the author shares stories from his journey to document the relative pain experienced after being deliberately stung by over 80 species of insects.  This led to the creation of his famous (well, at least among wildlife nerds like me) Schmidt Sting Pain Index.  His index includes a quantitative rating, along with humorous descriptions of the pain he experienced after being stung by each insect.  The most painful insect sting of all is the bullet ant, described as "Pure, intense, brilliant pain. Like walking over flaming charcoal with a 3-inch nail embedded in your heel."  The tarantula hawk wasp came in second place, described as "Blinding, fierce, shockingly electric. A running hair dryer has been dropped into your bubble bath. A bolt out of the heavens.  Lie down and scream."  Luckily, the wasp wasn't interested in us so there was no screaming required.

As I began to wrap up my visit, I asked Leroy what he likes most about living in Golden.  His answer, "all of this" as he used his arms to encompass his home and art.  I then asked him to share one thing that he would like to see improved about Golden.  His answer, "the neighborhood attitude", adding that many people don't understand him and his art.  He estimated that there are about 14 people living in Golden, although some websites put that number at closer to 37.  Let's just agree to say, "not many" people live in Golden today.

On my way out, Leroy asked me to sign his guestbook, strategically placed right next to a tip jar.  I wrote a quick note and gave him a tip.  Leroy then gave an Elvis Presley imitation while saying, "thank you, thank you very much." 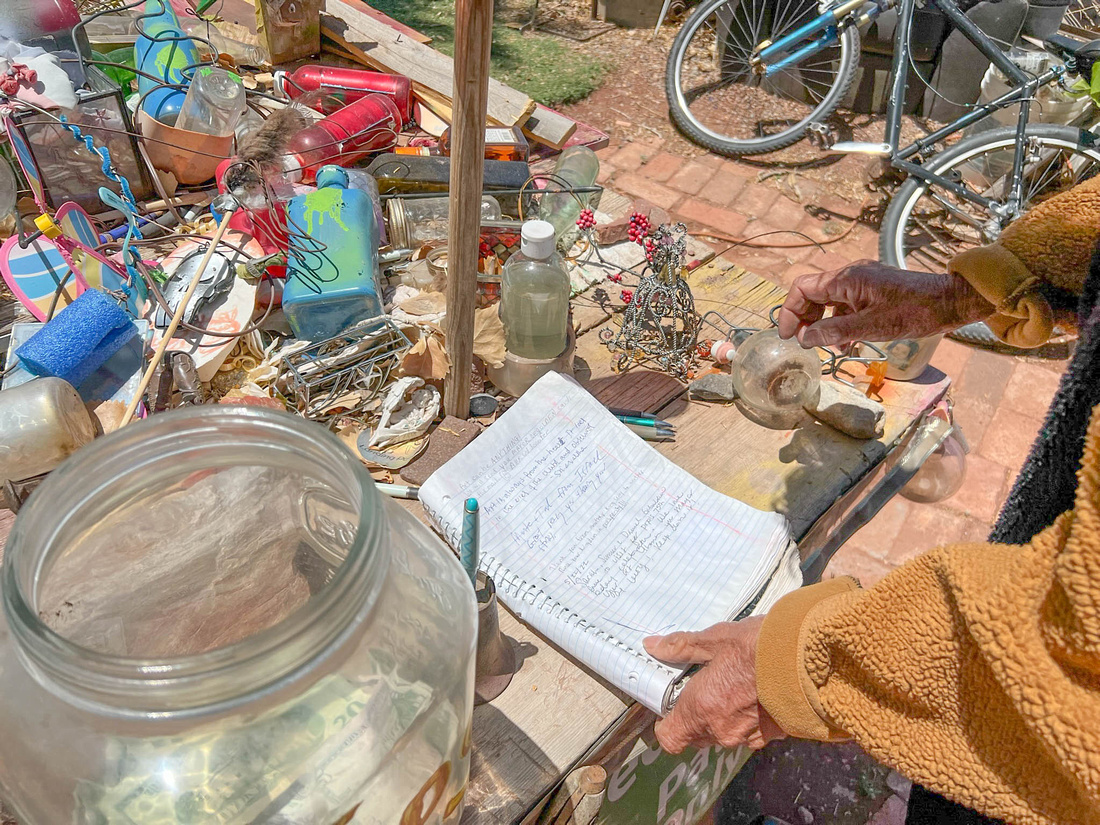 As we parted ways, Leroy said that the highlight of his day is to find something in his mailbox other than bills, and he encouraged me to send him something via snail mail.  Leroy doesn't have email, so he gave me his business card and encouraged me to pass it along, so here it is! 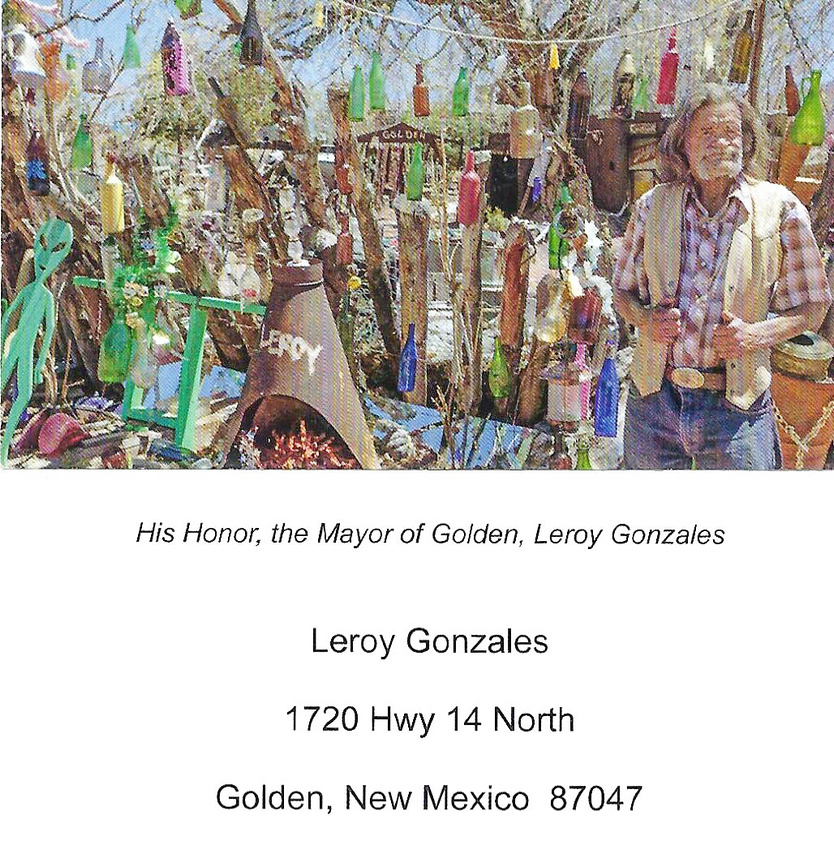 Since Leroy was the highlight of my day today, I decided to send him a copy of our photo together with the tarantula hawk wasp photobomber.  Perhaps you'll see it in his collection the next time you visit the Mayor of Golden, New Mexico.