What's the scoop on that old church in San Antonito, New Mexico?

There's a saying that "travel begins in your backyard".  Well, I recently decided to put that into practice by learning more about the old church and cemetery in the small town of San Antonito, New Mexico.  In the 14+ years that I've lived in Sandia Park, I've literally driven past that place over a thousand times, yet I knew absolutely nothing about it.  So, on May 27th I decided to finally learn more about the place.  Here's what I found out.

You can find San Antonito at the intersection of New Mexico State Road 14 (aka Turquoise Trail), Frost Road, and the Crest Road that takes you up to the summit of Sandia Peak.  Three different towns collide at that intersection.  If you're at the southeast corner of that intersection, at the landmarks of the Shell gas station and the Lazy Lizard Grill, you're standing in the town of Cedar Crest.  If you walk a few hundred yards east towards the post office, then you're in the town of Sandia Park.  If you look diagonally (northwest) across the street from the Shell gas station and Lazy Lizard Grill, then you'll see a cemetery and small church.  That's the "town" of San Antonito.  Blink and you'll miss it.  If you continue to drive a few hundred yards west past the cemetery towards Tinkertown Museum and Sandia Peak, you're back in Sandia Park.

To hopefully clear things up, I called the post office that serves Sandia Park, San Antonito, and Golden.  The verdict?  Most everyone uses Sandia Park in their mailing address, but there are rare occasions when they see someone use Golden or San Antonito.  In the end, I was told that it doesn't really matter which town you use in your mailing address since all three have the same zip code and all the mail goes to the same post office.  Ok, enough about that.  Let's talk church. 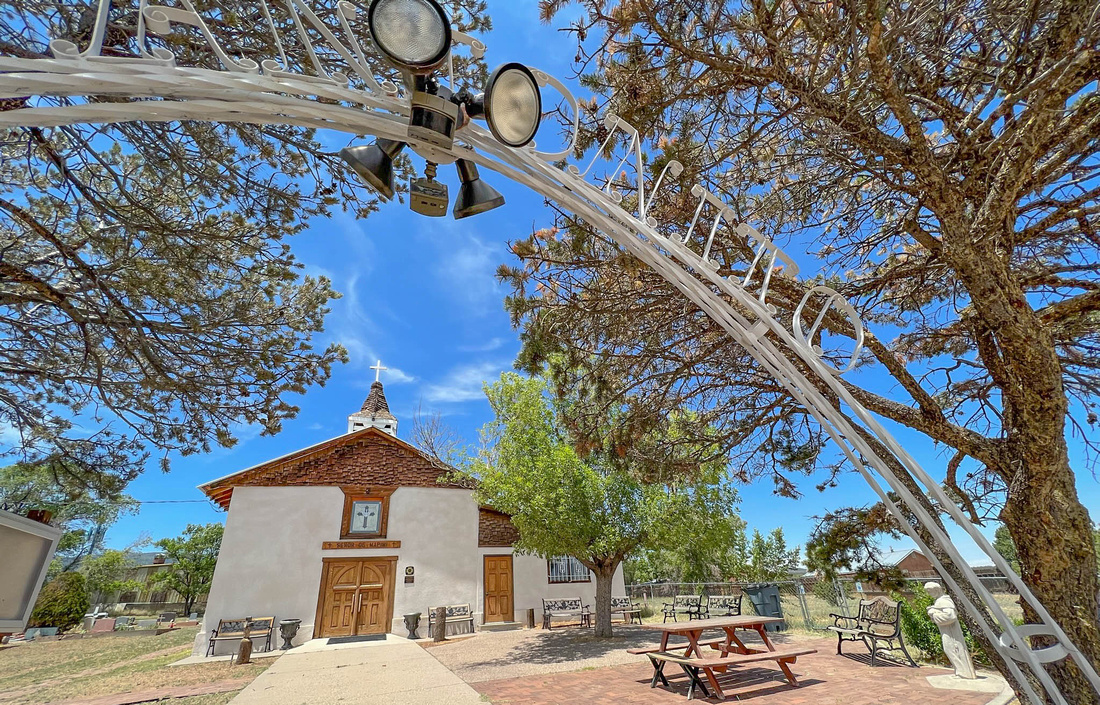 The San Antonito Church and Cemetery are listed on the National Register of Historic Places.  The church is estimated to have been built in 1886 and it has clearly been renovated and modernized over the years.  The official name of the church is Nuestro Señor de Mapimi Mission Church, also known as the San Antonito Catholic Mission Church and Cemetery.  It's one of seven mission churches scattered across the East Mountains that are affiliated with the Holy Child Catholic Parish Church in Tijeras.  Señor de Mapimi refers to a statue of the crucified Jesus, the community's patron, which is believed to have come from Mapimi, Mexico.  Unfortunately, the statue was stolen in the 1970s and has been replaced with a smaller crucifix that's used in processions. 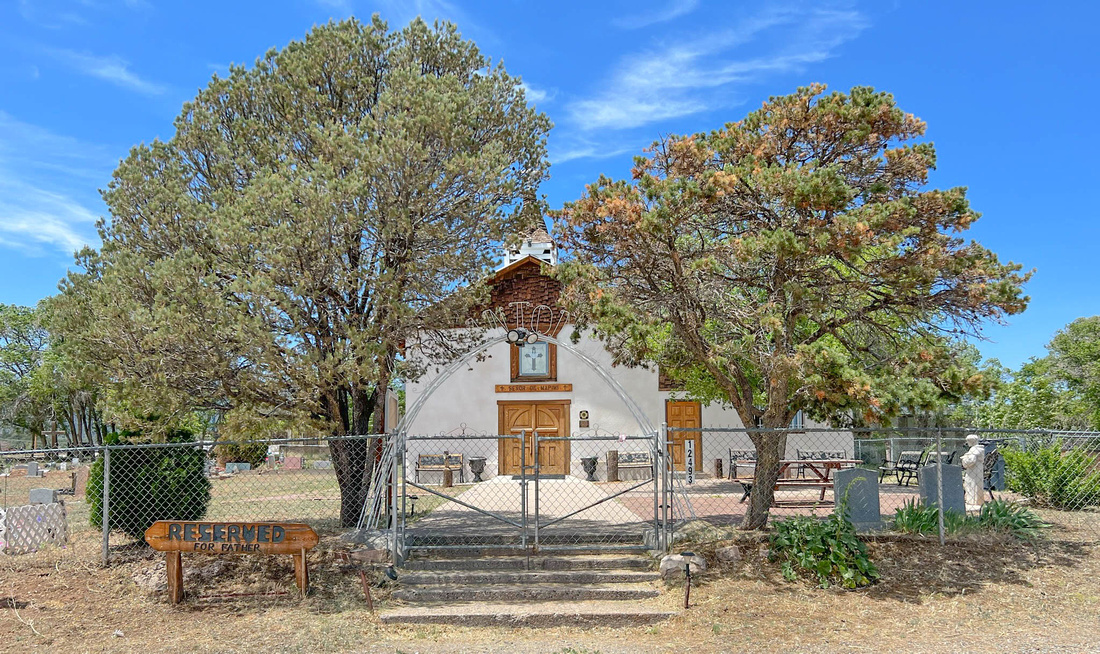 Speaking of processions, each year for Good Friday, the San Antonito Catholic Mission Church offers an easier pilgrimage option for Holy Child Catholic Church parishioners in Tijeras.  The Good Friday pilgrimage commemorates the walk Jesus was forced to make while carrying the cross on his way to be crucified.  Rather than join participants to walk 20 miles uphill (1,200-foot elevation gain) from the Church in Tijeras to the San Juan Nepomuceno Mission Church in Chilili, participants can choose to walk 7.5 miles downhill from the San Antonito Catholic Mission Church to the church in Tijeras.  I can see why people could view that as a mighty appealing Plan B.

When I arrived at the San Antonito Catholic Mission Church to check it out, nobody was there.  However, there's a large sign indicating that they celebrate Mass at the church on the 4th Friday of each month at 6:00pm.  Now that's a Mass schedule that many people could get on board with!  The 4th Friday was just a few days away, so I decided to give it a shot. 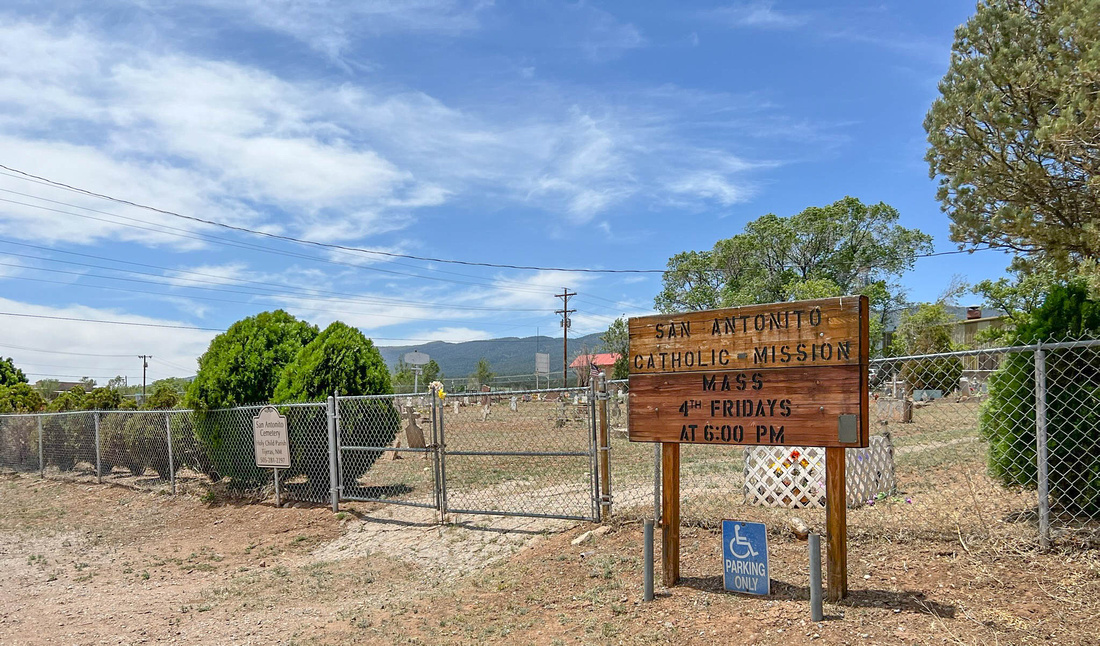 On Friday, May 27th, I stopped by again and, sure enough, it was open!  I dusted the cobwebs off my Catholic credentials and decided to attend Mass.  There were about 25 people, of all ages, in attendance.  The pastor never introduced himself, so I assume the congregation must be regulars, with the notable exception of me.  I believe the pastor is from the Holy Child Parish down the road in Tijeras. 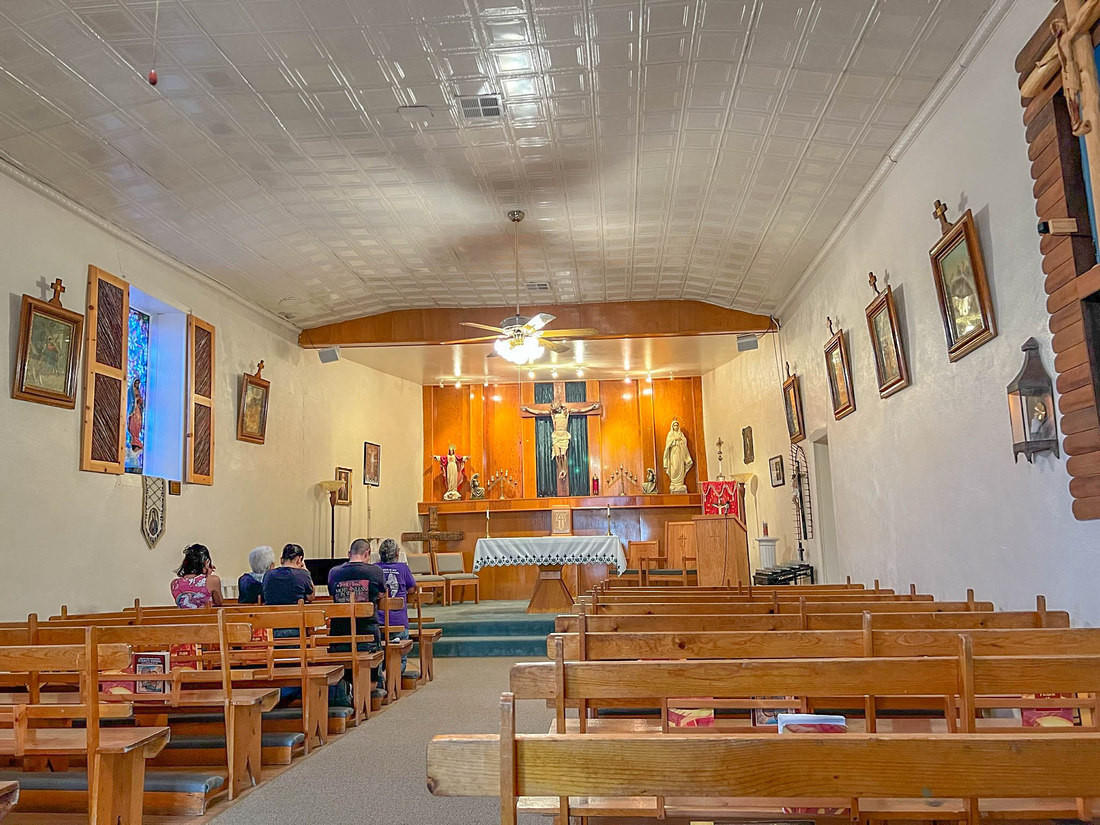 It was a very simple Mass.  At the beginning, the pastor rang a small bell to announce that he was about to walk down the aisle to get things started.  That was the only musical note we heard.  No songs or musicians.  Similarly, there were no other readers or participants in the mass other than the verbal responses from the congregation at the appropriate times.  The Pastor was a one man show. 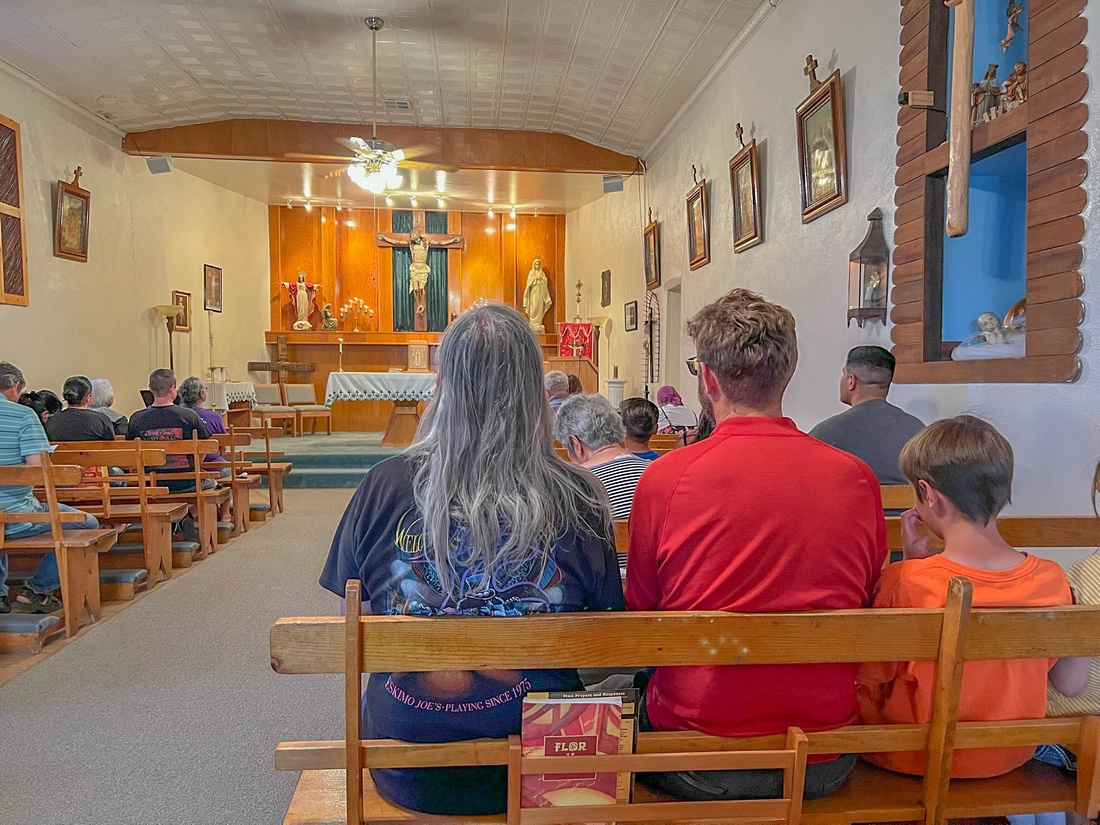 Mass is just about to begin

Communion was offered and the congregation lined up to receive the host.  For those of you who have no idea what I'm talking about, a "host" is a wafer-like bread that symbolizes the sacrifice of the Body of Christ.  It's basically a way for people to show devotion to Jesus Christ.  Everyone I saw knelt down as the pastor placed the host directly in their mouth.  I'm not used to doing that, and my mind was waffling back and forth on whether to give that a try or do what I'm accustomed to doing ... placing my cupped hands in front of me to receive the host in my hand and then put it in my mouth.  With such a small crowd, it quickly became my turn and out sprang my cupped hands to receive the host.  As for wine, that wasn't an option for anyone other than the pastor, mostly likely due to COVID precautions.

And that was it!  It was, by far, the quickest mass that I've ever been to, clocking in at 28 minutes from the time the pastor rang the bell to the time I stepped back outside.

After mass, everyone was invited to a potluck at the church.  Given that I had already eaten, and I had nothing to bring, I decided to make a beeline for my car and head back home.  Perhaps I'll go back sometime to join the potluck and learn more about the church and will make some updates to this post.  But for now, I'm glad I went, and I feel like I know a little bit more about the community where I live.  Time well spent.